The ITC 2010 annual conference was a revelation for me, and in many ways exactly what I needed to re-light my fire for instructional technology. I first heard of the conference last year when I saw that the Briyans were presenting there, and when I saw that I was wondering why I wasn’t attending. Listening to either one of these cats is a treat, but both is a veritable feast. So when I had the opportunity to come to ITC this year I jumped at the chance, and I’m ever so glad I did. What I have to say first and foremost about this conference is that it attracts some of the nicest, fun, and open people I’ve yet to meet in EdTech. Everybody is genuinely excited to be there, to learn from one another, and to share what they’ve learned. It’s truly a learning community in the best sense of that word, and being a part of that for too short a time—I could only stay a day and a half—almost made me regret having a third child 🙂 If you don’t have ITC on your radar, I think it’s high-time that changed.

The conference started out with an opening session by Jared Stein and Marc Hugentobler titled “Late Night Learning LIVE!” (link to full presentation on Mediasite here). The amount of time, energy, and work that went into this presentation is belied by the the brilliance with which it was pulled off, this presentation was superb. The format of a late night talk show eases everyone into the conference, makes it relaxed and fun all at once, while at the same time throwing bomb after bomb at the audience. When I realized how mercilessly Marc and Jared were dogging the LMS and pushing for alternatives like the loosely coupled approach characterized by Personal Learning Networks, I felt like a chump. They had hit almost every point I wanted to make, but using a format that was not only more entertaining, but framed in a style that allows for the audience to laugh at an important critique. An approach that is,  in my mind, the best way to effectively get people to consider your ideas—comedy is still the hardest and highest of art forms. And, truth be told, most people would prefer a comedy skit to a sermon any day of the week, and therein lies the importance of an experimental presentation like this one that pushes the bounds of how we communicate a series of new ideas at a conference. This presentation was a masterful example of engaging the audience while at the same time challenging them on just about every assumption we approach the LMS with.  So, in short….Bravo!  And kudos to John Krutsch who both Jared and Marc recognize as the originator of this format, you can see him doing the original “Late Night Learning Live!” here.

Also, I would be remiss if I didn’t detail some of the highlights of the session (and there were many):

Jared Stein’s interview with Jon Mott was brilliant. Jon, as usual, eloquently discusses the power and possibility of decoupling the management elements of the LMS from that system in order to afford his campus the ability to explore learning across a variety of domains and tools. Jon really does frame his argument beautifully, and as much as I scream and yell, what he is doing at BYU right now along with David Wiley (and I’m sure many others I don’t know) is nothing short of revolutionary, primarily because they can frame their approach as moderate in relationship to the “LMS is dead” crowd while at the same time realizing a very powerful initiative towards encouraging, enabling, and supporting faculty and students who want to pursue and cultivate their own personal learning networks on the open web at BYU. As for this video, I think it is my favorite of the presentation because Jared’s subtle use of a BlackBoard mug while interviewing Jon is the best kinda of on-camera gag you can imagine—simple and brilliant. You must see this one, it comes at about 11:00 minutes into the presentation. 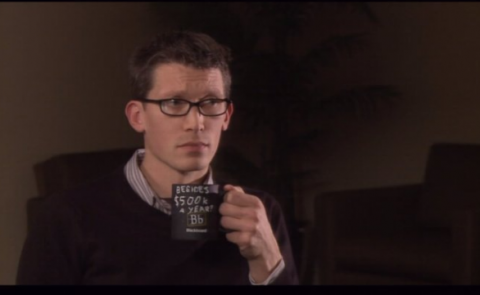 And then there were the commercials, the brainchildren of John Krutsch, and oh how good they are. I can’t find direct links to them online, so be sure to just watch the whole presentation, the commercials are brilliant.

Up next was Diego Leal discussing how he ran an entirely online course using an aggregated approach with blogs and wikis. He blogged about his setup here—which is impressive—and hearing him talk about the class and the challenges and triumphs was heartening. Being an educator in Columbia, the back and forth about the LMS is not really of issue, from what I understand they don’t have a major, all-encompassing system like BlackBoard, which makes the dependence on a small pieces approach that much more vital. And when done right, like Diego does it, it becomes apparent that our institutional dependence on the LMS for distributed, online learning is most clearly linked to the bottom line: scaling, efficiency and limited effort and investment in the learning design for both faculty and students—all of which comes at a price, on several levels.

And finally, you had an interview with Tom Woodward and I acting like survivalist lunatics offering tips for preparing for the rampant “zombification” of higher ed. This was fun to do, but a bit hard to watch while at the session because it simply re-enforced what I already knew, namely just how much funnier Tom Woodward is than me. We filmed these clips one evening from our respective garages—it was a blast to do and just further proves that their are few more willing to go bat shit nuts for a presentation than Tom Woodward.

I could go on and on about this presentation, but let me stop here to say it was one of the best I’ve yet to see at an EdTech conference, and Jared and Marc set the bar extremely high for my presentation the next morning, and I can’t say I answered the call. But, if I came even remotely close—which I didn’t—it was because of the people at this conference. In particular, busynessgirl, A.J. Williams, Dr. Donagee, Howard Beattie, Hannah, and several others whom I hope someone helps me fill in the details for in the comments. I’d like to give everyone credit because these folks made my presentation.  In short, the night before my presentation busynessgirl approached me and asked if I would be interested in having a choir for my Sunday morning sermon. I initially thought she was kidding, but it turns out she was dead serious. She recruited more than 10 people to actually march through the ballroom during my presentation and sing “I saw the light.” And for me, that made my talk (it as all downhill from there) and it captures what was so excellent about the ITC conference, the participants were not afraid to have a lot of fun. I talked about the coming reality of an educations based on small pieces loosely joined, and as usual built my presentation on the back of UMW’s finest faculty. Here’s a clip Barry Dahl took of the first 8 minutes of the presentation, which is pretty much all you need, and for an even more abbreviated version go to minute 4 for the stars of this talk: the EdTech choir.

As I mentioned already, it was depressing to leave the conference as soon as I did, and I really only got to see the grand debate and bits and pieces of various presentations on Sunday. I spent most of the time talking with folks in the hallways and finally sitting down and rapping at some length with Nancy White, who is a complete gem and has an uncanny ability to make you look closer at yourself and think hard about what it is we are doing in the field of edtech—even though she wouldn’t call it that. I finally got to see first-hand Nancy work her magic, and it’s no surprise why she is valued so dearly by so many. We talked about a range of things, but one of the issues that came up that has me thinking about things is the “massification” of education (Nancy’s term), the idea that increasingly we are seeing a push for open access to content across wide regions of the world without necessarily considering the ways in which the resources can be facilitated around specific, localized networks of learning. I think this is where Nancy’s ideas and practice with facilitation and community begin to dovetail nicely with Siemens and Downes‘ example of the Massively Open Online Course (MOOC) on Connectivism and Connective Knowledge Course. I’m beginning to connect more dots in this field after finally “connecting” with Nancy, and I’m feeling re-invigorated as a result. We all share concerns about turning open access to open educational resources into feeding lots of taylorized education (thank you for the metaphor, Gardner) rather than powerful examples of how we might harness complex networks of connections to start re-imagining the future of education that is open, affordable (if not free), and provides a sense of quality that is not germane to a resource as much as to a series of relationships around a resource, therein repositioning the idea of quality that all to often is associated with a material rather than the thought and ideas around it. 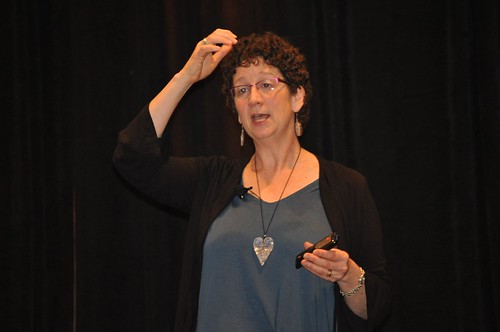 And while I didn’t see Nancy’s presentation in-person, I did watch it soon after it was published and her presentation beautifully models the introduction and facilitation of a new tool, watch how she masterfully and gently introduces Twitter in the first 10 minutes of her presentation at ITC10—so much to learn from her. And the way she uses Twitter to consciously break the wall between presenter and audience is extremely impressive, refocusing the idea of the speaker to a facilitator of a group of 300 attendees through a distributed tool such as Twitter—which becomes a lens through which to talk about and at the same time visualize the changing nature of networks using what she calls a “safe-fail experiment”—small experiments like a presentation that allows us to see what works and what doesn’t work. And more than that, she pushes back on the blogo-centric logic of my discussion, suggesting the “me” and the “we” need to dance between old and new structures, and experiment and explore the “me” associated with blogs as well as the “we” associated with wikis, forums, and even twitter. A discussion that links me back to John Maxwell‘s talk at OpenEd 09, wherein he brings into question the blogo-centric logic I’ve been promoting for a few years now—as have many others—by thinking about how the social creation of knowledge through wikis is a skill that in many ways challenges some of our assumptions about the primacy of the individual in all modes of writing and learning.

As you can see, this conference was as powerful for me as it was because I cam away questioning and re-thinking a number of my assumptions, and I have to thank Barry Dahl particularly for recommending me to speak at ITC 10, and Christina Mullins for being so cool in making the trip possible for me. Until Florida next year for ITC 11….