Katabasis and “Choose Your Own Adventure” narratives 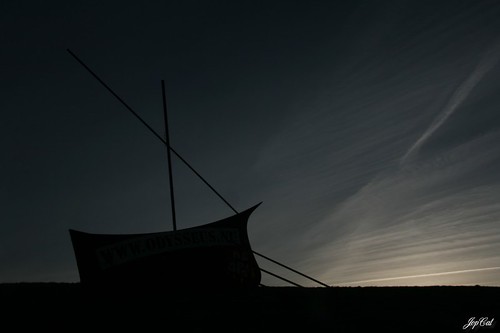 It’s funny how things work online, soon after reading Alec Couros’s post “‘Choose You Own Adventure’ comes to YouTube” (which is such a brilliant use of YouTube annotations for digital storytelling), I got a message from a Professor Angela Gosetti which pointed me to a “Chosse You Own Adventure” website one of her seminar students created for her final project, interactive project for freshman seminar dealing with Katabasis in Myth and Film (not sure what Katbasis is?…I wasn’t either until I looked it up on Wikipedia).

The student’s project is a lot of fun, but you can read her words about the interactive site she created here. I’ll quote part of it below, because I think it is very telling:

Hello people of my freshman seminar class and those who wandered here randomly. This is a choose-your-own-adventure type game that leads you through the entirety of the ancient Greek/Roman underworld seen through the minds of various old writers, but primarily Virgil and Homer. Why are we journeying through the underworld you ask? Well, your best friend without a name has gone and got himself killed again and rather than put up with his eternal whining when your time on Earth has ended, you might as well try and rescue him. I mean, you are an ancient Greek/Roman warrior on an epic quest to save a dear friend from a premature life in the netherworld. Being the hero of this tale, you’ll obviously make it through in the end, right? It didn’t work for that Orpheus character, but you’re better than him, so you’ll win this game anyways!

The tone and narrative of this “paper” is so fun, and I love the idea that she is both engaging her classmates along with the random “wanderer” on the web. The fact that she is conscious that her project will reach far beyond the confines of her seminar is really cool, and frames one of the marked differences between the end-of-the-term paper that rarely sees another reader outside the grader, and a project that is framed openly as an experience that one expects others to find and interact with. Also, the fact that she did this interactive project on a website publishing service (http://webs.com) other than UMW Blogs re-enforces what we already know, people will use the tools they are comfortable with whether or not they are inferior 🙂 And I now have another tool to look into to see how it deal with exporting work and thinking through how students might be able to manage all these different spaces they create over time. 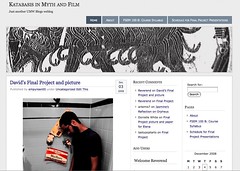 Also, I’d be remiss if I didn’t note that Angela’s course blog has been one of the most fun, active and engaged spaces on UMW Blogs I have ever seen. With almost 200 posts and 250+ comments—many of which are far longer than the original post—it has been an absolutely astounding success for generating a group-based discussion for a freshman seminar course, while at the same time providing a publishing platform for web resources and sharing final projects–unbelievable conceptualization and work on Angela’s part! It also makes me re-think the syndication vs. group blog dynamic for course blogs I talk about so much on this blog. She obviously liked the group blog structure, and it worked remarkably well. What would allow a faculty member to use a group blog, but also allow his/her students to get their work out easily would be a feed for each of the authors in a group blog so that their work could be fed out into their own space for archiving (and ideally along with the comments). As far as I know their are no author feeds for WordPress, but it just needs to happen so that the divide between group blogs vs. syndicated course blogs isn’t as stark as it seems currently. We’re still learning and experimenting with all this stuff, but it is certain there is no one right way, just ensure we can republish whatever it is easily.

2 Responses to Katabasis and “Choose Your Own Adventure” narratives