One of the biggest complaints on campus right now is that many of us really don’t know what is going on. I don’t mean this in an abstract way, but quite literally what events are happening at what time and where. Most of this information is being delivered via email, any I would gather—given the changing nature of communication–that there are a lot of people at UMW who don’t read email like they used to—and some who rarely did and others who rarely will. Now, I am not trying to discount email all told, I understand its value. At the same time I’m also convinced that an events calendar needs to be as flexible and mobile as content on the web is becoming. The more folks can both easily contribute and republish freely the events going on around campus, the more likely it is we will now what is going on.

So, while I was admiring the new link to UMW Blogs on the UMW homepage, I clicked on the Events link, and to my surprise it was a Google calendar. Wow! Who knew? When looking at the source code, I released it was actually an aggregation of 10 different Google Calendars–all the more fascinating. So, then I started to wonder, “how many UMW related Google calendars are there?” I did a search for the term “UMW” through Google’s public calendars and found over 40. Insane, right? And many of them are dealing with lectures, public events, museum exhibits, registration info, recreation, admissions info, career services, the multi-cultural center, the bookstore, etc. Most of which is important information for students, staff, and faculty, yet only ten of them are aggregated into the calendar on the UMW site. So, I subscribed to all of them to see what it would look like, here is a view of this weeks events in my aggregated calendar:

What’s amazing about this is to find less than half of these events I would have look in three or four different places on our campus website and my email inbox. With this kind of personal aggregation of Google calendars its all in one place, and I have a much better sense of what’s happening on any given day. But, there’s is the rub, this kind of aggregation of Google Calendars works perfects on an individual basis, but it is much harder to share out publicly on a web site or through a widget of some kind. What we have here is 40 different calendars (think of it as kinda like 40 different blogs for a class) with no really good way to aggregate them into a public calendar. Now, each of these Calendars has an RSS feed, but that won’t work in this regard because that feed will show the most recently added event in a calendar, which won’t necessarily match a chronological lists of events by day, week, or month. So RSS fails us here, and that is the engine we have used to publish and synchronize blog posts and the like.

So, how do we do it? Google won’t given me an embed code for the aggregation of all of the public calendars I subsrcribed to around UMW, for that might be one easy solution. But the issue is bigger, and thanks to Jon Udell, wh ahs been working through this issue for a while now, I have a much better conceptual understanding of the issues surrounding aggregating events which has been relatively forgotten with all the focus being on RSS. And, given where we are at UMW and with UMW Blogs, his forethought on this issue has finally come to bear in helping us think it through. The excerpt below is from his post “Celebrating iCalendar’s 10th Anniversary: The best is yet to come”:

Although iCalendar has been around for a decade, I argue that the confluence of syndication and personal publishing, in the calendar domain, requires three enablers.

First, you need a workable syndication format, and we have that: RSS for blogs, ICS for calendars.

Second, you need what we used to call one-button personal publishing. Bloggers have had that capability for a long time. Calendar users have it too, but it’s emerged relatively recently, and many aren’t aware of it.

Third, you need feed aggregators. These proliferate in blogspace but, I argue, are conspicously absent from calendar space. Services like Eventful and Upcoming produce calendar feeds. But because they do not consume them, they don’t encourage individuals and groups to publish feeds, and to think and act in a syndication-oriented way. I’ve prototyped a calendar aggregator at http://elmcity.info/events/, but the category isn’t yet well-established.

If my analysis is correct, one or more well-known services that both consume and produce calendar feeds would unlock the latent potential of iCalendar and help us jumpstart a calendar syndication ecosystem.

As a side-note, the aggregation work Jon has been doing with the elmcity.info site is pretty awesome, and reminds me so much of the work Barabra Ganley has turned her focus to with community digital initiatives.

So, we have the RSS for Calendars which is ICS (or the green ICAL button in Google Calendars), we can publish events easily with something like Google Calendars or Eventful, but the third point remains the obstacle for me at this point–I don’t know of a good way to aggregate the ICAL feeds from these 40 calendars into one calendar on UMW Blogs or anywhere else folks want to put it. Moreover, if you created an aggregator where departments, clubs, and organizations all over campus could add their ICAL feed to such an aggregator, the idea of event management and communication would change dramatically on campus.

And for a larger vision, a recent post by Cole Camplese about Wall Streams and Jon’s Internet Feeds to TV experiments has me thinking about ways to visualize calendar events, alongside what people on campus are blogging, tweeting, uploading to Flickr, YouTube. etc. all around campus with a few well-placed plasma screens.

Until smarter folks than me figure this out, I’ll keep searching for ways to easily aggregate 40 Google Calendars into one public calendar on UMW Blogs, though I do think the issues emerging around aggregating an re-visualizing all kinds of events and actiity is really exciting.

By the way anyone have a quick fix for my problem? Tony, Patrick suggested Yahoo Pipes!, you ever experiment with this? 😉

Update: Thanks to the great Tony Hirst, who I imposed upon in this post, I realized that the solution was right before my eyes in two ways:  a) I had the source code for the aggregation already discovered and b) Google Calendars allows you to do this easily already. Here’s the rescue post from Tony, and below is my quote from his solution c/o commenter Steve Boneham (thanks Steve):

Aren’t comments wonderful (thanks Steve:-) – it seems thaqt you can generate the combined embed code within Google Calendar… Subscribe to the calenders you want to display, then go to the calendar settings: 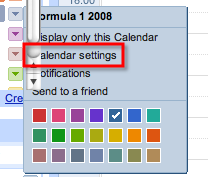 Select the “Customise the color, size and other options”: 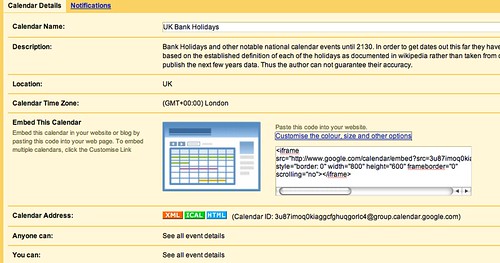 And then select the calendars you want to include: 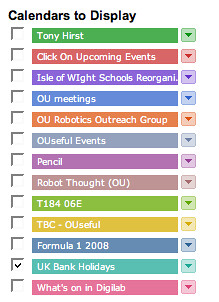