The Open Education 2011 conference has come and gone, and I would like to think my keynote got a few people thinking. I don’t believe everyone will like it, and I’m not even sure it is all that cogent—but there is a bit of theater, a few jokes, and a general argument that open education should be approached as an experience not a resource. That last bit came to me the night before the talk thanks to a discussion between Gardner Campbell and Alan Levine on #ds106radio. What’s more, the #occupyopened idea was Chris Lott’s brainchild, the tent was thanks to Marc Hugentobler‘s awesomeness, many of the performative details were filled in by Brian Lamb, and the visual aesthetic thanks to Michael Branson Smith. As usual, if it was at all a success it has everything to do with all the people who were so generous with their ideas, time, and feedback.

The idea of the presentation, in short, was to re-situate the power of open education back to connections, people, and relationships rather than resources. I used ds106 as the model for this argument while using Gardner’s privileging of open educational experiences over open educational resources (OER) as a general refrain. It was fun to do, and while I was nervous about the tent and had some technical difficulty up front (thanks David for bailing me out) it seemed far better received than I expected—which is a relief to me. Anyway, if you have any interest, you can be the judge of that thanks to the fact there is already an archived video available on YouTube.

And I am also including my slides here—which have links to many of the sites discussed—as an added “experience.” 🙂

Finally, special thanks to Giulia Forsythe for animated the talk with her awesome art, I am honored and humbled. 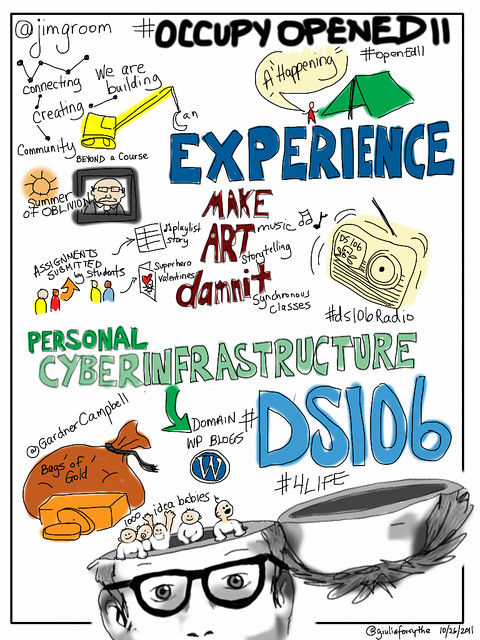