OER16 happened more than a month ago now and as time and fate would have it I’m just getting around to blogging it. It happened in the gorgeous city of Edinburgh, and let there be no question the Scottish are their own people. They even have their own version of Star Wars as the above Reddit thread can testify. My personal favorite comment is this image! 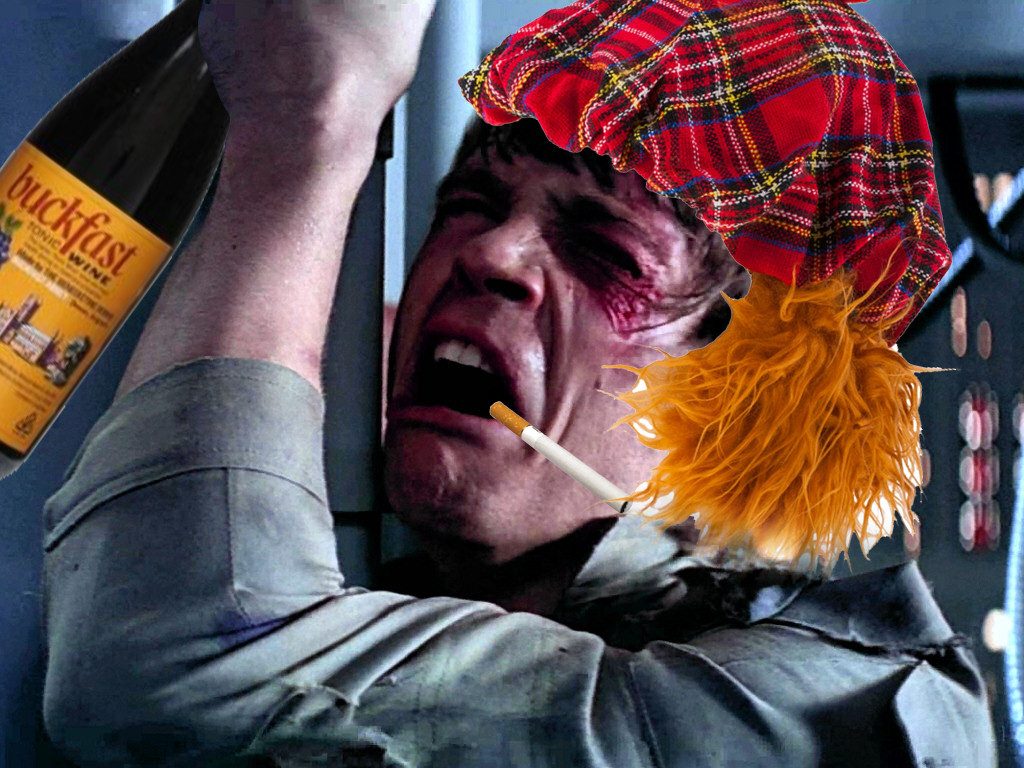 ds106 is strong with National Library of Scotland, in fact it’s the National Librarian John Scally’s keynote that tipped me off to these Scottish movie posters. Pure gold. In fact, the force was strong with so many attendees at the conference, and I think Catherine Cronin‘s keynote was a major highlight. Her ability to brilliantly return us to some of the pressing questions which brought us to open in the first place was masterful. If you want an intelligent, circumspect, and well written glimpse of the conference, I recommend you go read Catherine’s post on the conference and leave the bava in peace to wallow in its solipsistic, downward spiral. 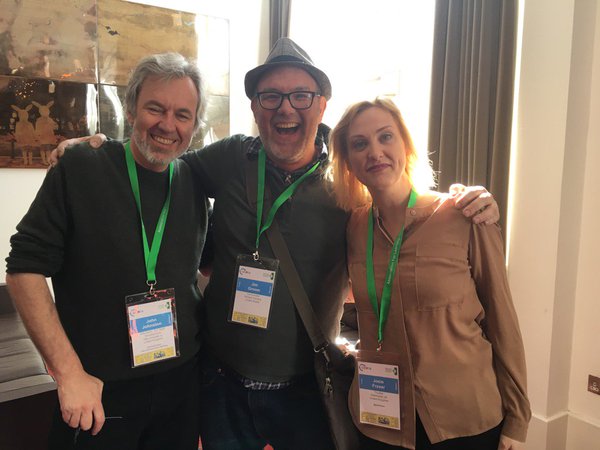 John Johnston and Josie Fraser are much bigger in real life!

One of the things that was special for me about OER16 was finally getting the opportunity to meet several awesome folks who I’ve followed and admired for years: people like Tony Hirst, Jodie Fraser, Frances Bell, and ds106 legend John Johnston (who, by the way, made up one half of the awesome conference AV team—the other half being the inimitable Martin Hawksey).

OER16 was also my formal introduction to the UK edtech community, and as I mentioned to quite a few folks, I really appreciated the role the Association for Learning Technologies (more commonly known as ALT) played in stewarding the conference alongside the amazing conference co-chairs Lorna Campbell and Melissa Highton. Being outside the UK ed-tech scene, I always had this idea of ALT as some huge, EDUCAUSE-like organization with scores of people running the show. Little did I know that was anything but the case. In fact, they are quite the opposite. ALT is a small organization that seems to have survived the almost decade long reign of austerity in UK’s higher ed funding. From what I understand the lack of funding orphaned UK’s OER conference until it found an organizational home with ALT. And I must say another highlight of the event for me was meeting ALT’s chief executive Maren Deepwell, we connected immediately and I really dig her style. 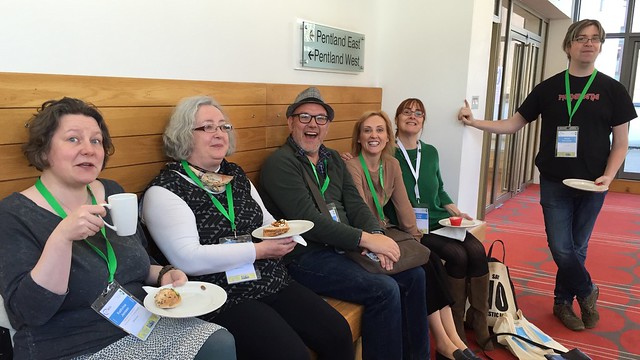 And then there were the old gold open ed folks like Brian Lamb (my gateway drug to the whole open thing), Grant Potter, Martin Weller, Viv Rolfe, David Kernohan, and many more I am forgetting I’m sure. But this brings me to probably the most important point I wanted to make about OER16. It was for me brought together a bunch of folks who have been, for the most part, marginalized by the ed-tech gold rush for MOOCs, big data, analytics, etc—a push for the last four years that dominated the field’s time, energy and precious few resources. And as the interest wanes and the funding drys up, it actually might be a good time to get back together and re-focus our interests. The highlight for me of the time was talking with Grant Potter, John Johsnton, and Tony Hirst about making SPLOTs using Docker. In particular, I keep thinking about trying to make a supercut SPLOT along the lines of the magic John Johsnton has already done—something that I would love to make a summer project. But that was a good indicator of the conference tone for me: a return to low-key, small, focused, and fun projects. The idea of scale, sustainability, critical mass, etc. was not the focus, it felt like a return to some of the simple, cheap, marginal experiments that made the field fun to me ten years ago.

I think what brought this home was the brilliant panel “Web Today, Gone Tomorrow: How can we ensure continuing access to OERs?” about the issues surrounding centralized repositories for OER versus distributed, smaller models premised on design of the web. Pat Lockley made a persuasive and engaging argument in his video “The Plight of OER” that most of the resources we consider open are not provided by the institutional OER repositories (many of which are shutting down due to lacking of funding), but rather contributed by a few individuals. And Viv Rolfe pointed out that many of the open resources that have been funded by public money are no longer available, there is a crisis of open when it comes to anything resembling a long-term archive. And I would add much of that has to do with the way in which it is tied to large, centralized, and expensive repository solutions rather than remembering the web is made up of small pieces loosely joined. As Brian Lamb mentioned during the panel, “When did open becomes an end rather than a means?”

As for my keynote, well to quote Brian Lamb again, “I played the hits.” I couldn’t help it, I felt like ds106 is what folks want to hear about, and I can point to few better examples of open culture—which was the theme of the conference after all. I think ds106 was new to many folks there, but I still felt a bit guilty at the indulgence. I had originally planned a more protracted critique of how we imagine OER in the US (namely textbooks) and moving into trying to make sense of some of the various technologies that might power more personalized infrastructure like domains, SPLOTs, and alternative applications like Sandstorm, Docker, etc.,  but I only really touched on the idea. Lorna Campbell’s summary of the keynotes comes highly recommended, and I think she’s far more generous in her description than the reality of this talk, although she does frame nicely the talk I wanted to give 🙂

Jim urged us to turn our attention from open, shareable educational resources, to shared technical infrastructure. Asking what if we focused more on small-scale personal, re-usable software rather than monolithic, institutional solutions? What if we worked towards a collaborative infrastructure for OER that was always framed and scaled at the level of the individual, not unlike the web? With the shift in web infrastructure to the cloud, the advent of APIs and containers, and a burgeoning network of distributed and collaborative ed tech, we may be entering a moment where the open culture of networks is key to a sustainable future for OER.

It’s almost a year and a half later and I still haven’t been able to effectively frame my talk on the cloud, containers, and APIs. Although hope springs eternal, and after my time with Brian Lamb at Coventry the week after OER16 I have a better sense of how this might be done because Brian is doing this very work himself. As for the talk, I think it was fun, but I do think I was relying too much on ds106 and stuff I had already presented and that hurt it a bit. My talk at Coventry the following week covered similar terrain, but started with the UMW Console exhibit I worked on at UMW that made the talk feel a bit fresher. Also, to be totally frank, I was a bit more nervous than usual for this talk, and I’m not sure why. Maybe the ghost of Simon from American Idol set the critical Brit quotient a bit too high 🙂

Anyway, here are the slides and below is the video, brought to you by the good folks of OER16.

I also took part in a Virtually Connecting session led and blogged by Alan Levine, and a discussion with Ammie Scott for Edutalk radio I have yet to listen to. That will change shortly. As you can see, there was a reason it took me so long to write this post, there was so much to say. And I am sure I forgetting several people, things, and ideas that someone blogging the whole thing in the moment, like the great Frances Bell did, would be far more reliable. But alas, I already warned you of the deleterious effects of reading the bava.