I have been working on a side project that will be using Peertube and as a result realized after installing the latest version that this awesome open source software now includes live streaming. I’ve been playing around a bit with live streaming apps like Owncast recently, so this was pretty exciting. I tried live streaming a VHS tape I was archiving, and was blown away by the minimal buffering. The stream was solid!

I am experimenting with live streaming in PeerTube, and it has next to no buffering or lag, better than both Owncast and Ant Media, crazy https://t.co/weffJIOK6v

In fact, I tried another version of the same VHS archive with some audio filters on the incoming signal and got a solid archive for posterity:

A nice part of this setup is you can choose between streaming to a unique URL that archives the video at the same namespace for posterity or you can have a consistent URL (what they call permanent live) dedicated to streaming from a single URL for an ongoing event that you can stream to multiple times from different sources. So the fact it has the option between one and done archiving and permanent live stream boiled-in is quite nice. 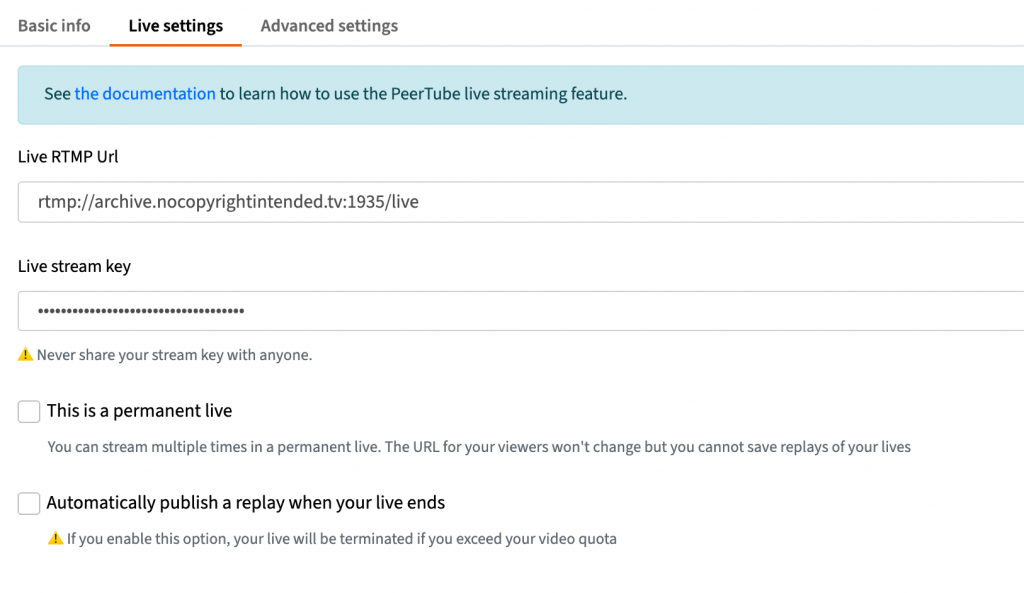 As of now there is no live chat as part of a stream in Peertube, which is a deal breaker for many who want a Youtube or Twitch alternative. But have no fear because this is open source software and someone is developing a livechat plugin for Peertube. I will be playing with that later this week, so I’ll definitely share what I learn. Below is a quick overview I recorded of Peertube’s live stream if you are interested in seeing more.

When I realized this functionality was available I knew I had to upgrade bava.tv to the latest version of Peertube. I was apprehensive because I haven’t had much luck upgrading Docker containers, but luckily the upgrade instructions were clear and worked beautifully. One of the things I realized is that the latest version of Peertube is using Nginx for the  reverse-proxy as opposed to Traefik (which my install was using). This led to an issue opening up port 1935 for the stream, but luckily the great Chris Blankenship bailed me out after I asked for help in Reclaim’s community forums. So, I am running bava.tv on Peertube 3.0 with traefik as the reverse-proxy and everything is working well, which is awesome!