In mid-May I took a trip back to Fredericksburg, which included a quick jaunt to Long Island to see family and collect a gorgeous Pole Position in New Jersey and a Pleiades cocktail my brother was storing for me. This was my first trip back in which Reclaim Arcade was in full swing. I guess the theme of this trip was continuing to map the transition from dream to fun project to viable business. We’ve been collecting games for almost 3 years now, and I consider that the dream phase. With every new acquisition the dream of what’s possible becomes realer and realer—this is a fun process given you don’t yet have to worry about managing things: you just need the time and cash to find and purchase games. 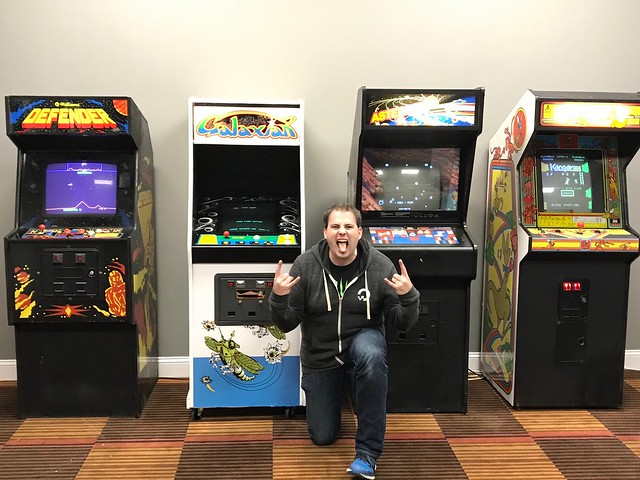 After that comes the fun project part. And while it is not always fun and games building out the arcade (especially when you throw in food and beverage), I think it’s fair to say Tim and I did have some fun this fall and early winter actually getting the space up and running. I wrote a bit about the trip back in October/November talking about how the space was nothing short of art, and after that Tim installed a bitching video wall. Come January we actually got this fun project successfully launched and opened at the height of the pandemic in the US against quite a few odds. Tim and I reflected on the process of opening in the moment in a Reclaim Today episode, which captures the excitement we were both feeling.

I would characterize this most recent trip back to the arcade as another shift in which we focused on ensuring Reclaim Arcade remains a viable business. This is something Tim and I are familiar with after running Reclaim Hosting for 8 years, but with that said, the arcade is an entirely different beast. While we successfully opened during a pandemic with a scaled down, targeted model, we knew that model would need to change once the restrictions were eased and things started opening back up. During the pandemic we were able to offer the entire space to private parties or public access with significantly reduced occupancy within a 2 hour block. As the restrictions began to ease in April and May Tim and I started brainstorming how to transition to a new model. In fact, it’s almost like re-opening the business all over again, which can be a bit taxing physically and psychically. 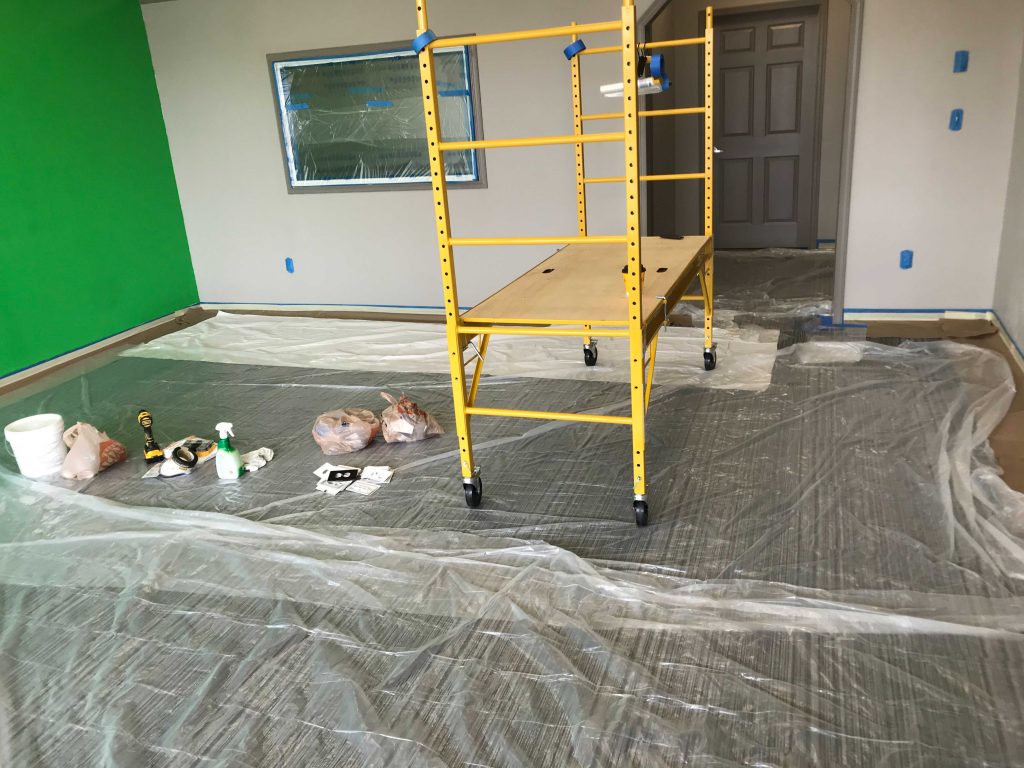 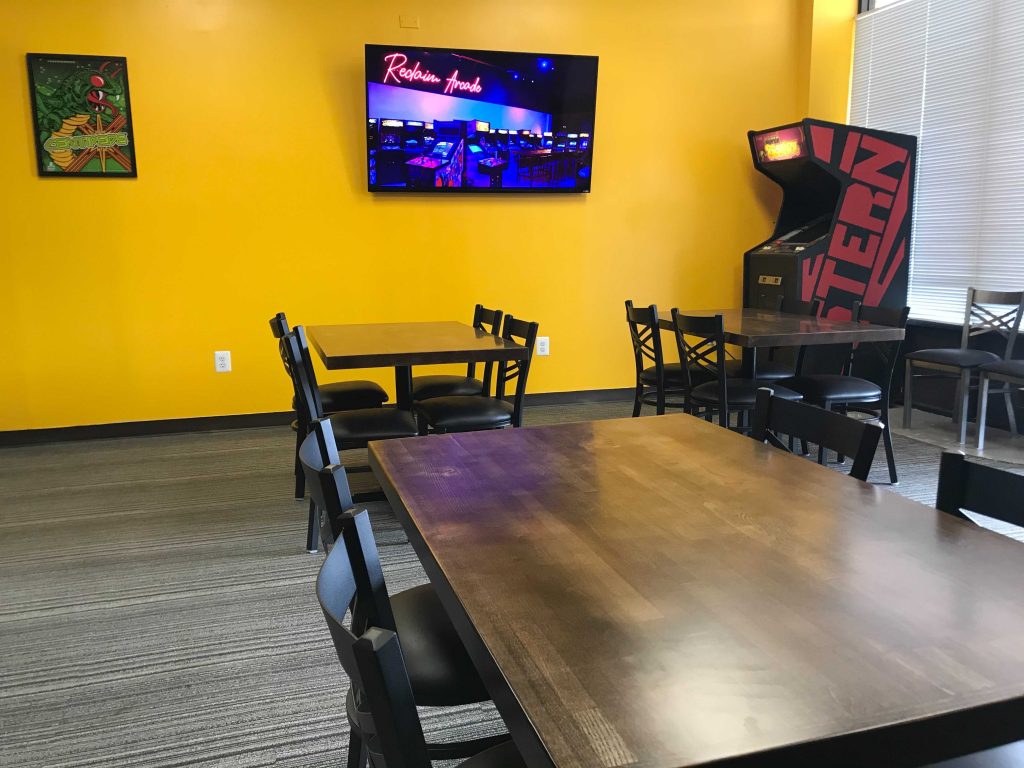 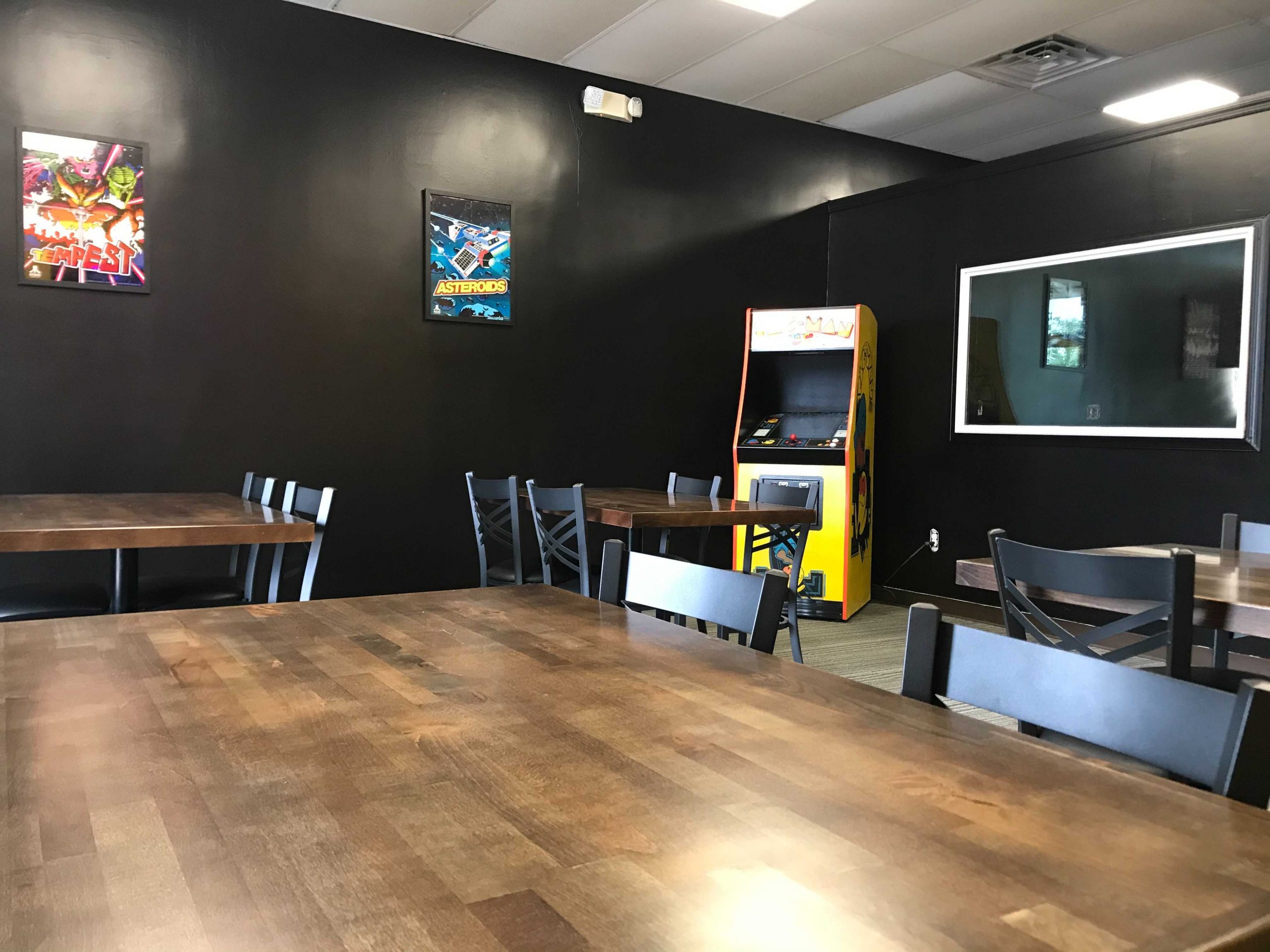 Parties really floated us the first several months we were open, so we needed to keep those going which was part of the inspiration for my going back to help get a party room online as soon as possible. But Tim hates waiting, so he basically did most of it before I even landed. He did save the cove base for me, which reminds me of all the side jobs I did with my brother while trying to afford to live in NYC while doing a Ph.D. 🙂 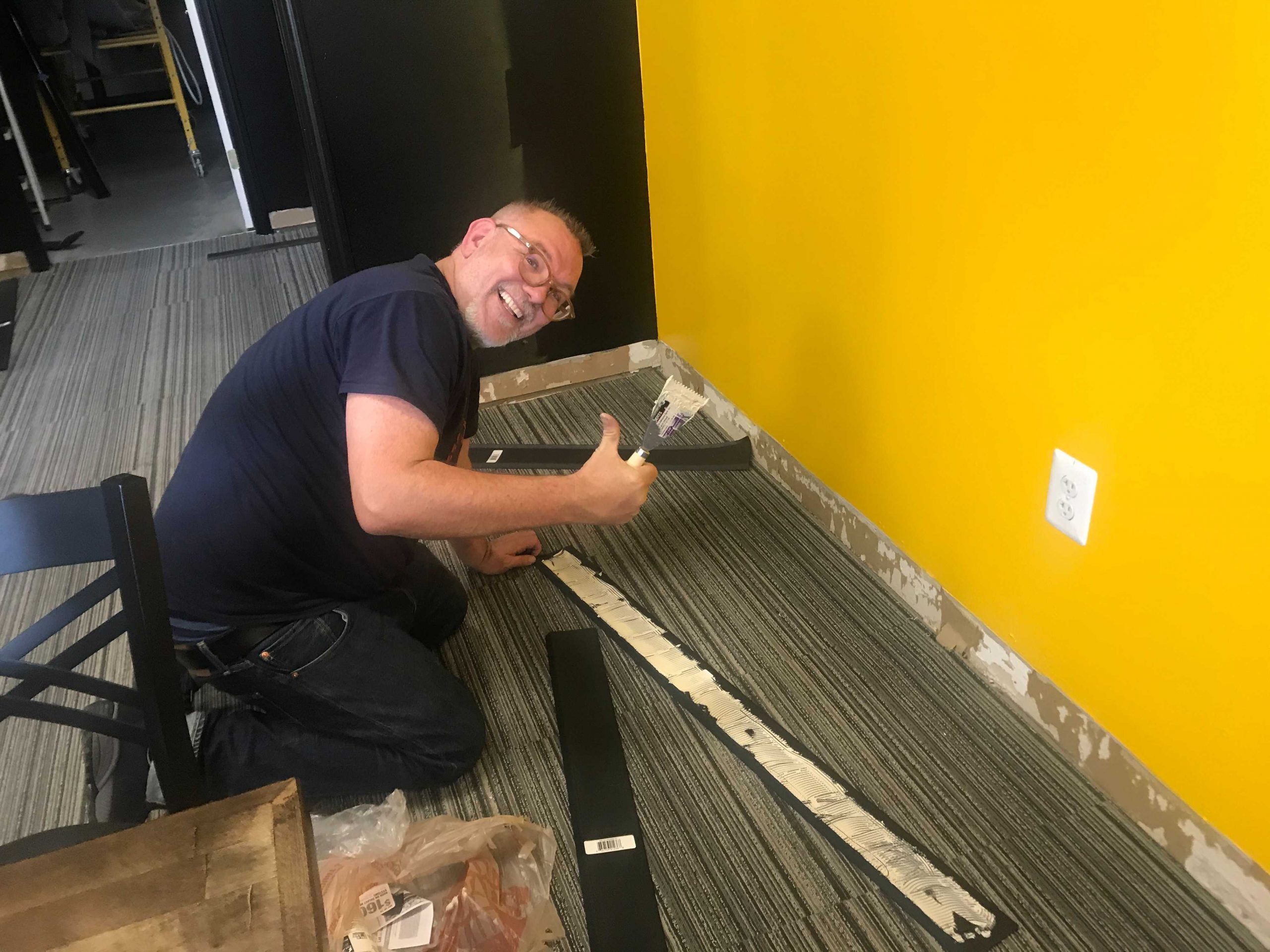 Tim also painted the Reclaim Arcade logo on one of the walls that is not pictured here, and we got 4 sets of tables and chairs, some LED lighting and moved a few games in the party room hall, and that was that. In just a couple of weeks the party room was ready to be booked, if you will it it is no dream! 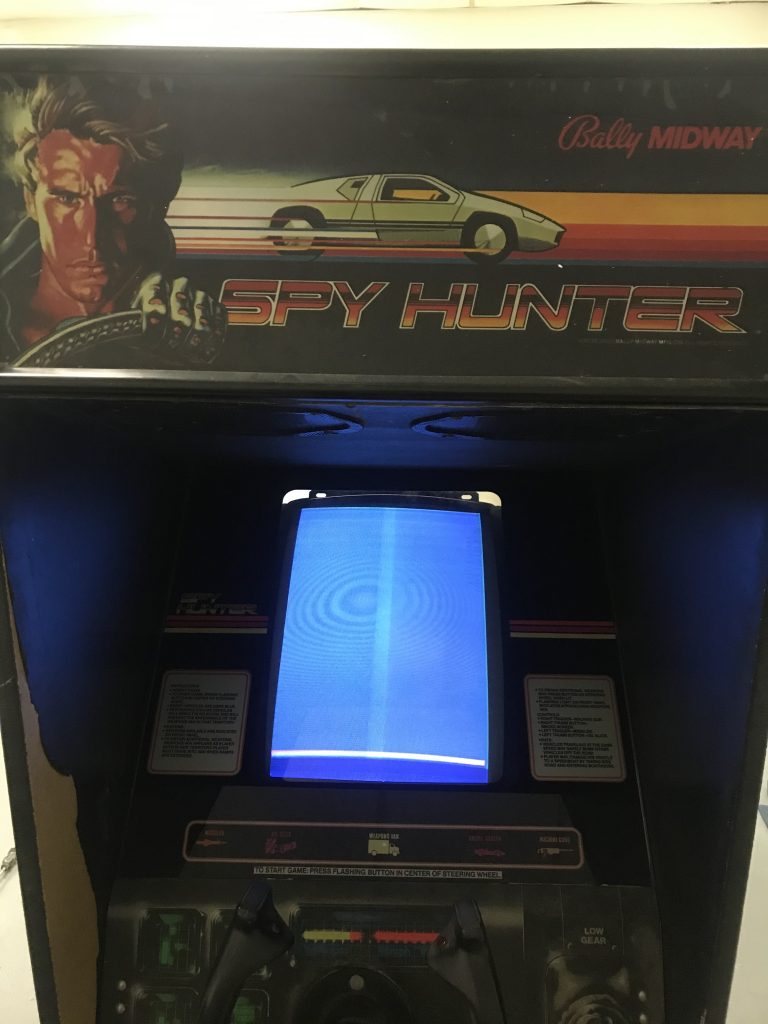 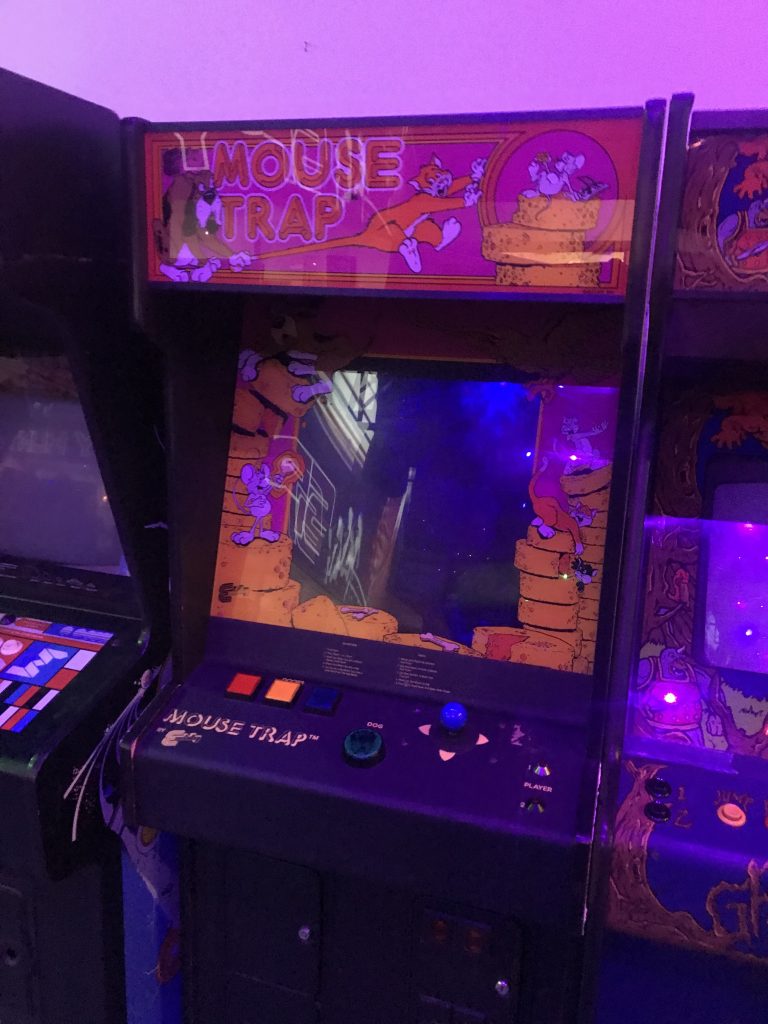 Mousetrap back online after an Arcade Buffett fix

The other projects I started as soon as I got back on the ground was the long game of machine maintenance. Tim does this all the time, so when I’m back I try and do double time to ensure the video games are locked-in so Tim has less to do when I’m not there. This usually entails monitor work, PCB board repair, and various other bits like high score save kits, testing boards, cleaning games, etc. As soon as I got off the plane I picked up a Spy Hunter project machine in Northern Virginia that may come online in the next month or two. At the same time the Arcade Buffett (arcade repair extraordinaire) was at Reclaim Arcade working on a few games that need some TLC. The first night back was a doozy given I was 6 hours ahead on European time and did not get to bed until 4:30 Am Eastern US, but I like to get as much done early on during these trips because I begin to fade towards the end.

Got this personal fav back on the @reclaimarcade floor for the weekend. Phoenix has special place in my overly nostalgic hear. pic.twitter.com/u3lLVM5903

Arcade Buffett worked on the monitors for Mortal Kombat, Mouse Trap, Star Wars (although there is an ongoing issue there cause the PCB repair also resulted in no love), Killer Instinct, swapped the monitor on Phoenix, rejuvenated the Gyruss cocktail, as well dismantling the bavacade Galaxian and Defender monitors for chassis repair. He also took a gander at the Venture project, which has a dead power supply and needs some extra love. In other words, no shortage of work at Reclaim Arcade. He took 4 K4600 chassis to repair (one for my Scramble back in Italy, one for Venture, one for the Defender, and one for Galaxian) as well as a G07 that was having issues. It was a long night, but I was already feeling accomplished less than 24 hours into the trip. 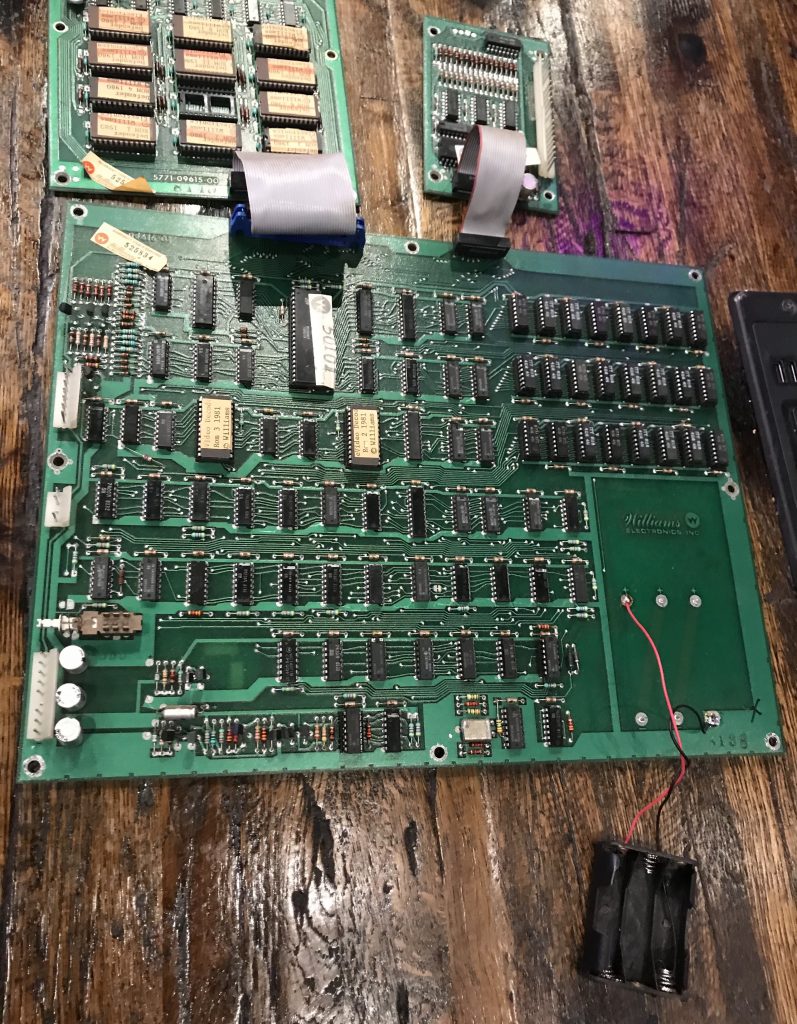 This is a Defender PCB that has multiple boards, which is what I mean when I say PCBs

The next morning had me taking close to 15 PCBs down to Mike of East Coast Arcade Repairs in Petersburg to get a bunch of boards working. I brought the following:

There may be one or two I am forgetting, but this was most of them. Three were already working so no work needed, but the rest needed to be repaired, and that ensures most of our games have PCB boards we can quickly swap out—a practice that often keeps a game online. The Star Wars repair did not fix the problem, so that is still a mystery. Also, the HSS on the Super Cobra may have been a mistake, so that PCB still needs to be looked at. 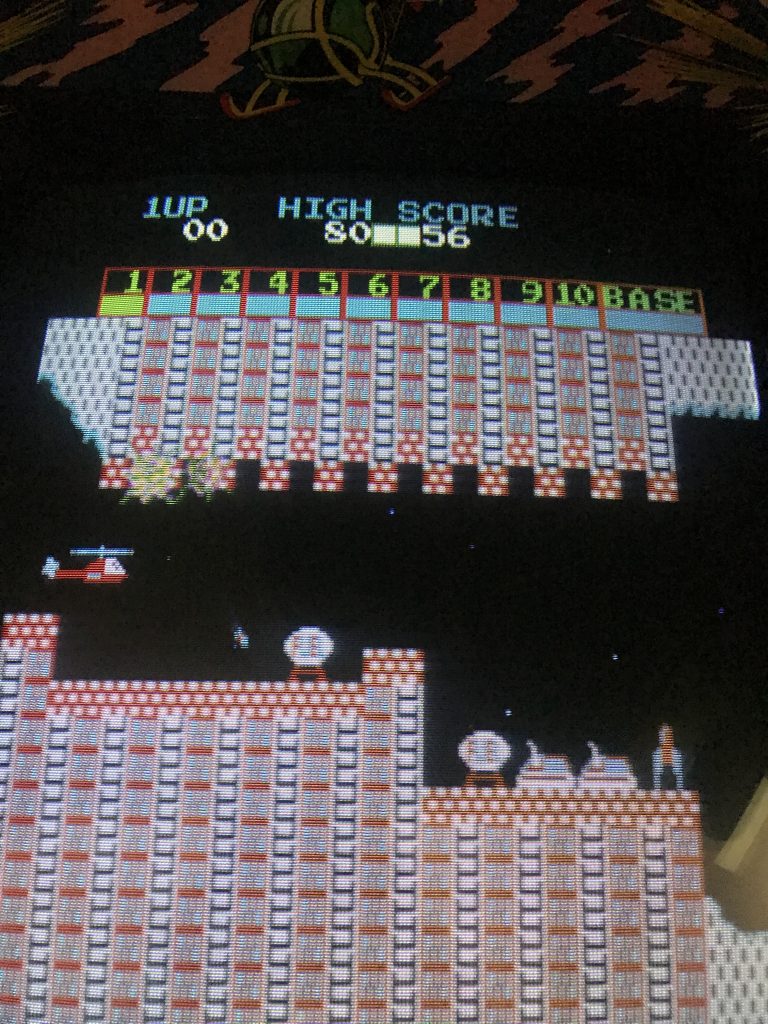 The Defender PCB is jumpy after getting it back, so will test it against the second PCB set we are getting repaired. The machine this one came out of is Reclaim Arcade’s Defender, and I put the bavacade Defender out on the floor running a JROK. I also took the board set out of the bavacade Defender and sent that in for repair, so we will see if that has the same issues.

The second haul of PCBs later in the trip was smaller:

A lot of work to be done, and we got lucky enough for Mike to come to Reclaim Arcade and check it out (he was a particular fan of Reclaim Video), and he took a look at the Venture and Spy Hunter machines as well. Confirming the Arcade Buffett, a rebuild of the Venture power supply may be possible, and I think Spy Hunter may be closer than we think to operational—but not sure if there is a power supply issue there as well as the PCB, but that brings us up to date on the Reclaim Arcade repairs, but that’s a never ending story. 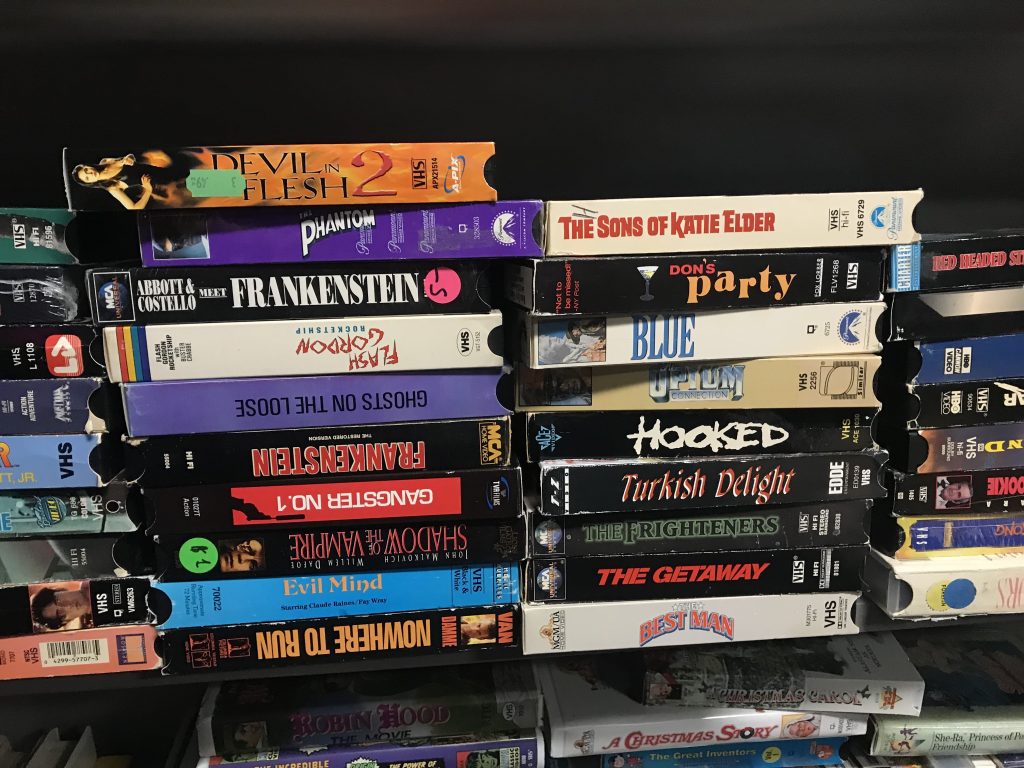 VHS Stack as we get them in the system

With both the party room and the games well in-hand by the end of week one, I could turn to some of the other projects I needed to take care of, including organizing the laserdisc and VHS collections, moving all my personal stuff (books, DVDs, papers, etc.) into storage, all in service of getting the space ready for the next phase of work at Reclaim Arcade which includes a kitchen! 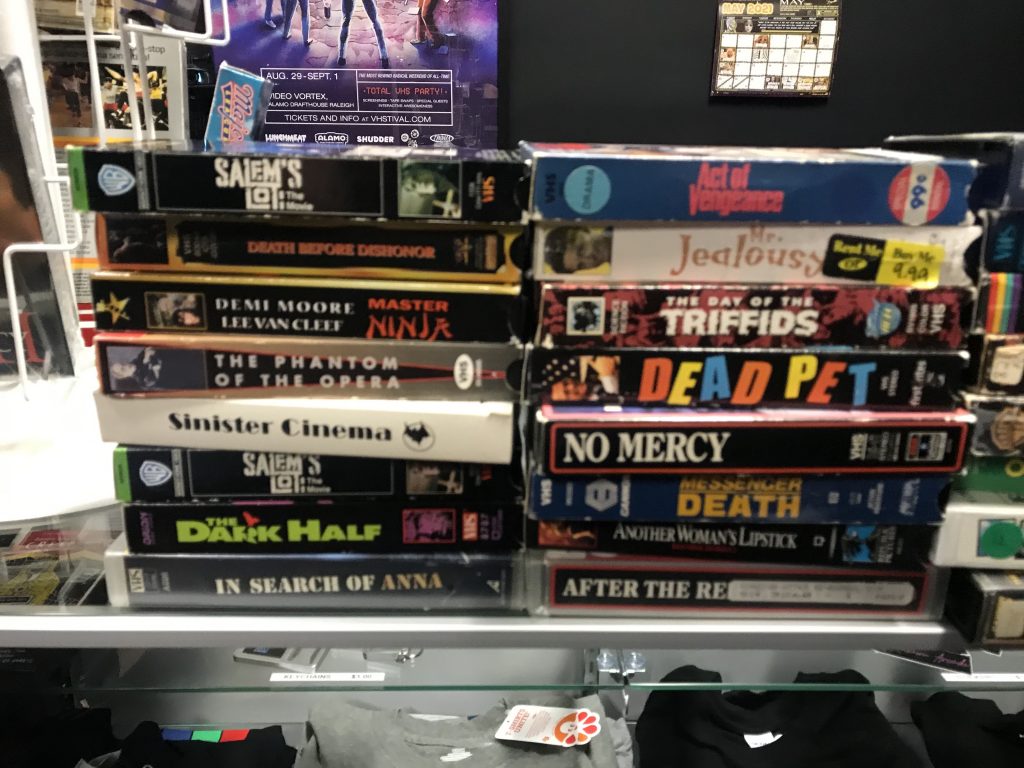 VHS Stack as we get them in the system

Getting the hundreds of VHS tapes I have bought and folks have donated into our database has been long overdue, so I worked with Sophia to get that under control and she made short work of it. I had boxes and tubs of VHS that were just waiting to be inventoried, so I put a kinda of moratorium on acquiring new tapes, but that is now lifted as my recent adventures on Ebay attest to 🙂

I should talk a bit about my recent acquisitions in a separate post, but I am starting to really fill in the gaps of the the collection, and that feels good. Reclaim Video continues to hold a special place in my heart, and I have seen more than a few folks take joy in it, not to mention the amazing moment wherein one of the extras from Nuke ‘Em High was at the arcade and asked Tony and I if we had the movie on VHS…..of course we do! Two copies in fact! He was even kind enough to reprise his role for us on the fly:

Tonight at ?@ReclaimArcade? one of our guests asked if we had Class of Nuke ‘Em High in @reclaimvideo, which we do. Turns out he was an extra in the film and was kind enough to reprise his role of a student watching a Bone-nosed Cretin steal pasta #sogood pic.twitter.com/cyWYOjwVCA

Another highlight of the trip was seeing the living room get used in some of the ways we imagined. For example, a group of teenagers who had attended a birthday party stayed around and watched Gremlins. 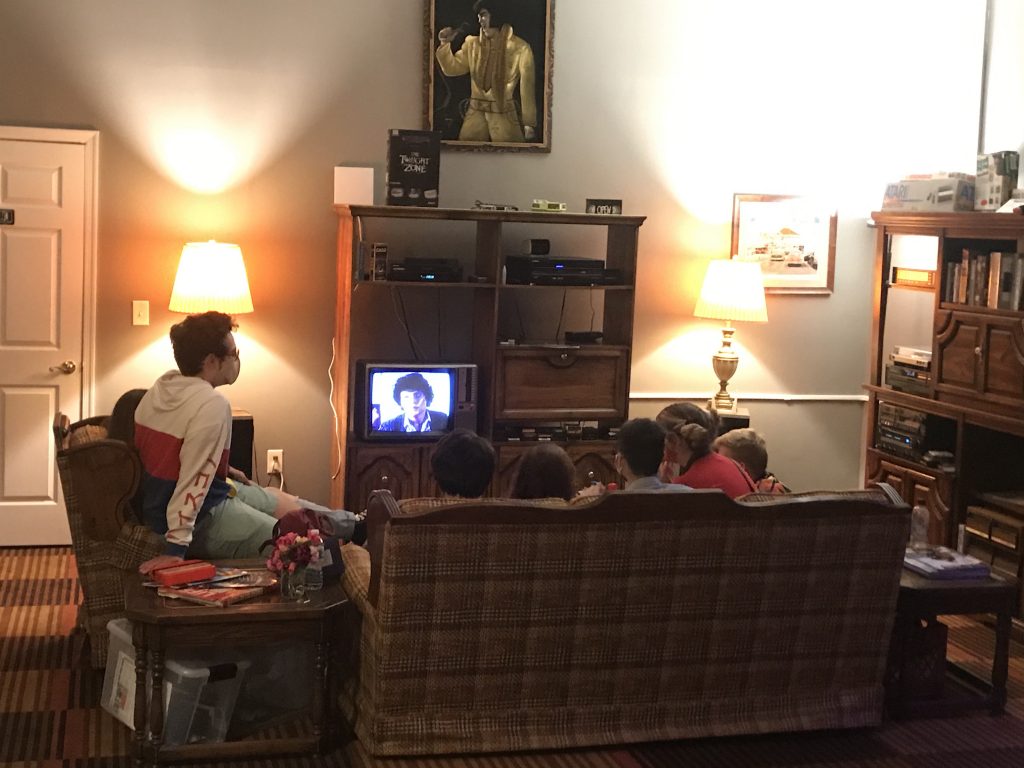 That is everything to me! And Tim noted that with the new model of folks not being limited to two hour blocks we will see more of this, and I really do love the idea of the space being full and lived in! 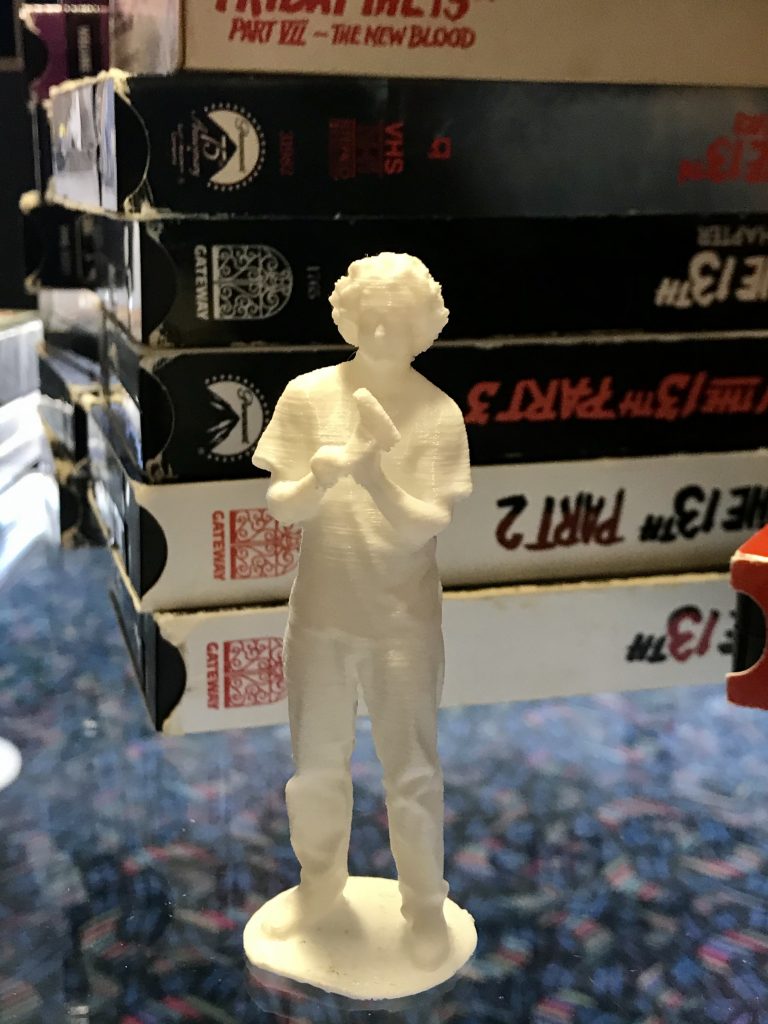 But the greatest joy for me during this trip back was seeing folks in the space and working alongside Shane, Sophia, and Tony. We got really lucky with these three, and they are an absolute blast to be around. Tony reminded us that The Empire Strikes Back turned 41 years old, and even had it playing on Reclaim Video’s VHS/TV setup, that is #4life!

41 years ago today the greatest of all Star Wars movies ever was released. Now playing in @reclaimvideo pic.twitter.com/rnn4dwCJxP

There is a lot that goes into making Reclaim Arcade operational and even successful, and Sophia, Tony, and Shane are a huge part of that right now. I’m filled with awe seeing how responsible, cool, and into the Reclaim Arcade vision these three are, and it fills me with hope that it will be more than business as usual everyday at Reclaim Arcade, it will be an experience to remember! The chaos of memories can be the most generative kind of entertainment, and the possibility of creating new ones is the ultimate goal of all of this.

3 Responses to Return to Reclaim Arcade