Yesterday was a fairly quiet April Fool’s Day. I didn’t see much on Twitter, didn’t read any scam newspaper articles/ads, and the folks on UMW’s campus didn’t seem to be feeling it either. That’s fine with me. Good pranks are hard to pull off, and forcing something mediocre isn’t worth the energy.

So last night, after Antonella and I had put the kids to bed, we were ready for a movie. We started surfing Netflix (Max let us down twice—but I still love him) and kept coming back to the home screen where the most recent original programming from Netflix “Rotisserie Chicken” was continually front and center.

Usually I don’t click on stuff like this. I’m all business when it comes to watching movies. I want to see something good, which for me often means re-watching films I know are good. I don’t watch films about rotisserie chicken as a rule. Nonetheless, on a lark Anto adventurously said “Let’s ese what this chicken thing is.” And so ee did. And my estimation of Netflix rose a thousand fold as a result. For nearly six minutes we watched a chicken rotate in and oven. It looked exactly like the one below, it just rotated a bit slower:

I have to admit, it was mesmerizing. It was as if Andy Warhol had come back to life and made one more film 🙂 The entire film was 1:13 minutes long. We knew this not because we watched it all, but because after we figured out the prank we quickly scanned through the entire roast. Spoiler: the chicken dies. I can’t tell you how much I loved this whole thing. After finishing the abbreviated version, we went back and read the movie description: “witness a searing, chronology-defying return to one’s origins that stokes the imagination.” I wonder if the “return to one’s origins” bit might be playfully referring to Thomas Gunning’s “cinema of attractions” theory defining a particular thread in early film that…

‘solicits a highly conscious awareness of the film image engaging the viewer’s curiosity.’ Instead of having the audiences focusing on the narrative, I think the films from cinema of attractions encourage the audiences to remain aware of the act of looking, the impulse and excitement from the image. (from Vincent Li Sun’s Film Theory blog)

Probably not, but it’s fun to imagine—that’s why we have blogs, right? Also, it by no means lessens how awesome this prank was. Fine work Netflix, while you might be a big data gobbling corporation that will eventually engineer serendipity out of film watching, you made this year’s April Fool’s Day memorable. Stay golden, chicken boy! 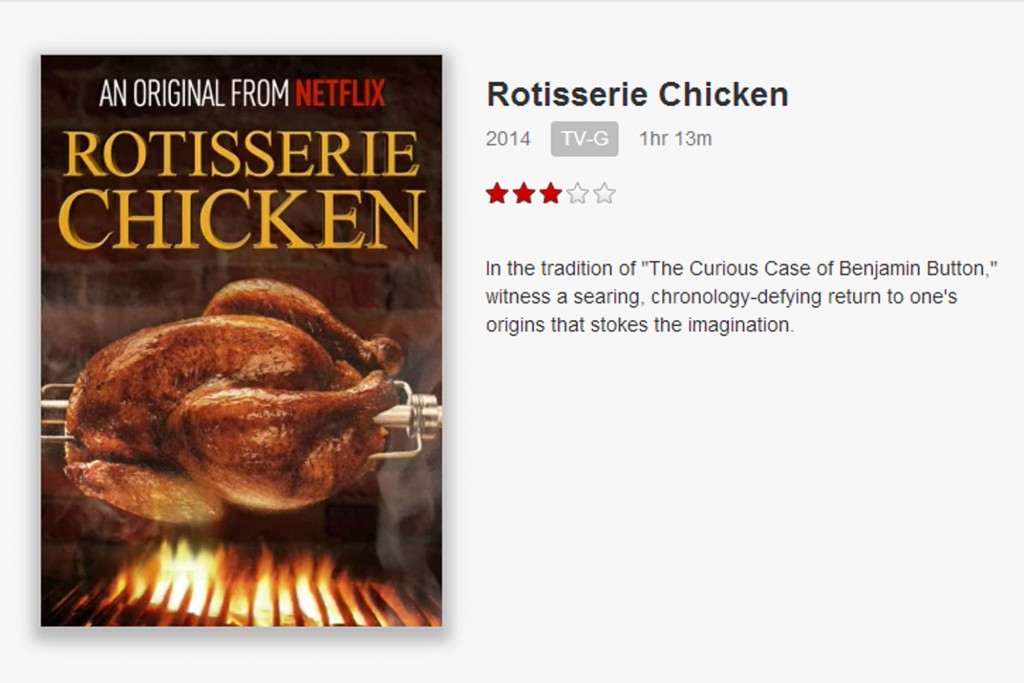