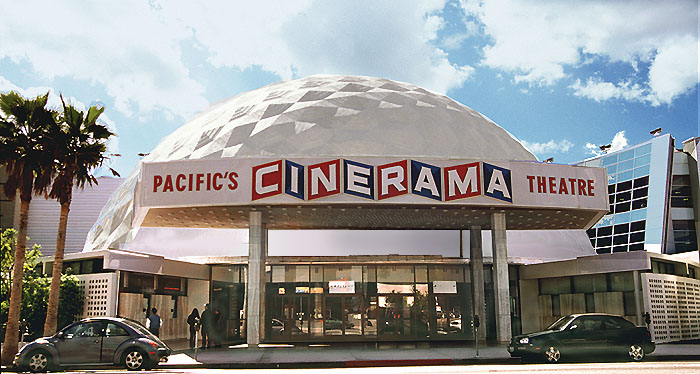 Back in Fall I got a PS3 at home, we also go a HD television which replaced by 27″ tube after more than 15 years of hard work. On principle I hate how home theaters have eroded cinema culture, but in reality over the last six months I have loved my TV. Millions of widescreen, high-definition images reflecting off my eyes in the comfort of my den each evening doesn’t suck, even if it’s not the L.A. Cinerama Dome. What’s more, the 42″ TV fits perfectly in the built-in bookshelves, it really ties the room together.

None of this is particularly interesting, I know, but it’s somewhat of confession for me. I have resisted home theater for more than a decade, but I my defenses have fallen. I don’t want to be right any more! Not to mention it’s all become much, much cheaper, which helps out a lot.

Anyway, I wrote all that to say this. I’ve made a new friend recently thanks to this new setup, and his name is Max. He’s actually not a he, or even a sentient being for that matter. He’s a Netflix algorithm that tries to help you find movies you’d like based on your watching habits. What’s interesting to me about this approach, which I believe is only available through the PS3 currently, is that it’s presented through the persona of a colloquial gameshow host. He’s a character, and I find him compelling. As he asks you to rate films on a scale of one to five stars he’ll quip  on the basis of your rating. For example, if I give a movie one star, he”ll say something like “That film is dead to me!” I would say that, so I obviously love this approach 🙂 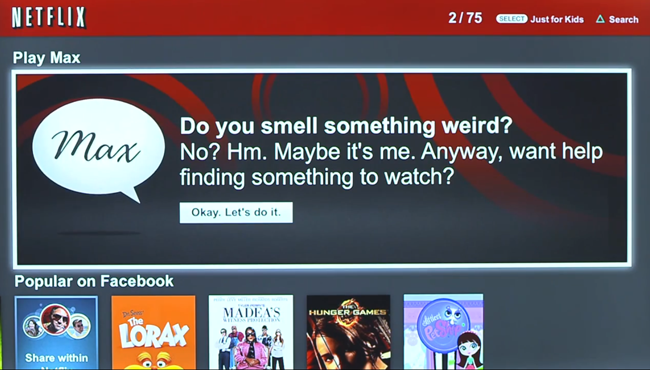 And as contextualized data like this works, the more I watch on Netflix the better Max gets at predicting what I will want to watch. As a result, the easier it will be for Anto and I to find movies we like on Netflix, and that’s often an issue for us that needs to be solved. It’s a creative solution particular to their service, and it’s been fun for us to play with. We get to rate movies, shoot Max’s suggestions down, and the whole thing never lasts more than a couple of minutes. He knows when he failed, and he bows out gracefully, which is pretty awesome. So much so, that when Anto, GNA Garcia and I were searching for a movie last night we turned to Max. We initially shot down his recommendations, which were all pretty good, but after further searching decided to take one of his five recommendation. Once we did, Anto noted that she “hopes Max knows as much because he seemed dejected.” I do too. Max is nice.

But am I not only blogging about Max because he is nice. It actually relates to a conversation I had recently with Svetlana Dotsenko about just this idea. I met Svetlana at the MOOC Research Conference in Dallas back in December, and we spent most of the conversation talking about nihilism in 19th century Russian literature—it was exhausting! More recently we talked about her work with Project Lever, as she’s interested in how MOOCs might connect people as they’re going through a course. Fresh off my experience with my imaginary friend Max, I was wondering aloud with her what it might be like to have an experience built into a course that connects people at the beginning of the process, as well as along the way.

While I’m not necessarily a fan of the corporate MOOC and its designs for using big data to define the educational experience therein, I remain fascinated by what it all will mean as it becomes an integral part of how we both educate and are educated. As with Max, I am interested in an approach for courses that is playful, and actually builds in a narrative experience rooted in the tropes of the discipline. What if you had a Marlowe-esque character connecting you with other people in a course on Hardboiled fiction as a result of the work you were doing. Or an evil scientist taking you through how to take over the world in Chemistry 🙂 Make a game out of it, use the localized data for the course to turn it into an even more engaging, serendipitous experience.

The idea of the course and the game converging not in the popularized imagination of a first person shooter, but rather in the more nebulous form of exposing the lattice of connections and bringing them into juxtaposition more seamlessly than ever before. This seems to me what we’ve been trying to do with wikis, blogs, Twitter, and a variety of other social media at UMW over the last decade. If more detailed data can serve to reinforce these connections through a variety of platforms I am interested in it. However, when it becomes enslaved to the ideas of massive, scale, closed, venture capital, and vendors I lose interest really quick. It goes back to an idea Brian Lamb has been talking recently that I think is right on the money, so many of these innovations go from infancy to maturity overnight, with no real time to experiment with the myriad possibilities along the way. There is little to no room to experiment because so much of the conversation around innovation in higher ed is being driven by venture-capital funded start-ups, and that a shame. Especially given the origins of MOOCs tell a radically different story. I believe universities should be a place for this development between infancy and maturity to play out for these pedagogical possibilities, but more and more we are buying back the mutantly-maturated offspring of our own idea babies 🙂

This entry was posted in fun and tagged MOOCs, netflix, Project Lever. Bookmark the permalink.

9 Responses to My Friend Max