Let that just hang there for a moment.

Being in NYC this past Wednesday and Thursday couldn;t have been better. The city was crackling with a powerful sense of disaffection in the face of egregious corporate welfare, the humanitarian limits of capitalism, and the crisis of a democratic consciousness made this trip feel as vital as they come. I was dying to join the scene down at #occupywallstreet, and luckily on the Wednesday before the presentation Mikhail Gershovich and I got the opportunity to check out that rather concentrated and contained beacon of possibility that is fueling imaginations all over the globe (a stone’s throw from 9/11 and in a private park no less). And it must be acknowledged it’s just one in a line of many movements of its kind over the past 3 or 4 years (it starts for me with the #iranelection and then again with the #arabspring, the protests in Barcelona, the rioting in London and Vancouver—and much more I’m sure). All distinct, granted, but all based in what seems to me an international frustration with the sterile global vision of wealth, security, and power that the majority of us feel not only outside of, but victim to. We did a number of radio interviews, videos, and pictures—nothing all the momentous but just more media for the internet fire 🙂 I’ll try and wrangle up any #ds106radio archives out there of interviews we did at #occupywallstreet and post them shortly. 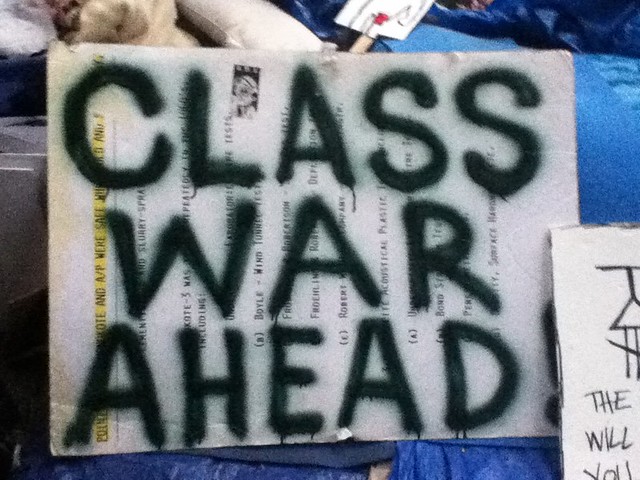 Given my setup of the cultural/political backdrop for the trip in the previous paragraph, what could be better than being in NYC with the commie contingent from the UK. Not only did I finally meet and have the privilege to present with Joss Winn and Mike Neary, but as an accident of history I also got to meet Richard Hall, Graham Atwell, and Doug Belshaw who were all in town for the #mobilityshifts conference. It was an awesome 36 hour tour-de-force for meeting a number of folks who I follow closely online and feel a very deep affinity with (and I haven’t even mentioned Michael Branson Smith—but more on him anon). The presentation on Thursday was part of the Bernard L. Schwartz Communication Institute’s Seminar on Innovative Technology series and Joss and Mike discussed there project Student as Producer which re-imagines students role in the design, development, and critique of the curriculum. The process of teaching learning is decoupled from traditional power relationships so students become an integral part of the governance of an institution rather than solely its customer. What’s more, the crisis in higher education in the UK—a crisis we in the US slept-walked through in the US years ago when tuition outran any logical pace of inflation—buttresses the importance of re-thinking a sustainable model that re-imagines the social relationships around the production and distribution of knowledge. What’s so amazing about Joss and Mike (and Richard Hall as well) is that they provide a framework of rethinking curricular and human relationships within and throughout a university—but by no means limited or entirely dependent upon it. 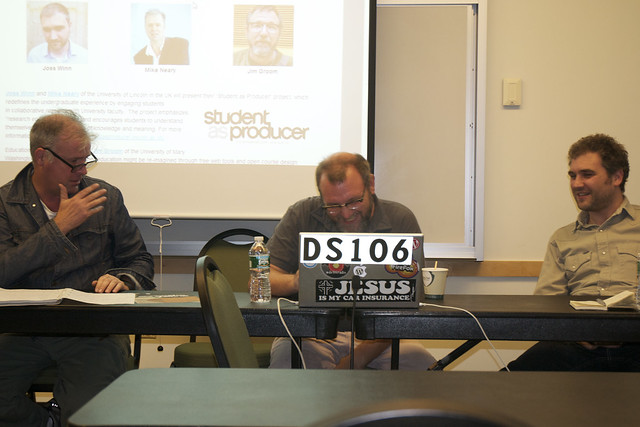 I presented after Joss and Mike, and these days I can’t help but talk about #ds106 in presentations. No one really asks me too, but I do believe it could complement the notions of avante-garde pedagogies in relationship to feeding an approach to Student as Producer in the classroom. I had a heroine joke that died a terrible death, but other than that I think some of ds106 is starting to make more sense to thanks to Student as Producer as a theoretical framework. But, in the end, I have to say I really want other people to present on their experiences with ds106 because mine are almost predictable, I want everyone to frame it and I would love to see many, many more people present on it and talk about what, if anything, it might mean. Anyway, here is my attempt with some major theoretical lifting of Mike Neary and Joss Winn.

Update: I forgot the slides which have the visuals and more importantly the links, which I think I should disaggregate out into this post—I’ll try and work on that.

Special thanks to Mikhail Gershovich, Luke Waltzer, Tom Harbo, and Suzanne Epstein for an awesome event, and to Matt Gold, Boone Gorges, Jody Rosen, Maura Smale, and more for coming out—I love CUNY, and it was a blast. And I haven’t forgotten Michael Branson Smith, but that is for another post coming shortly. (I couldn’t find a link for everyone, so send me an update or leave a comment if I missed it.)

8 Responses to Student as Creator