Two days ago Alex U. at the University of Montreal sent me an email asking if I had time to answer a few questions about EDUPUNK as a learning model for a presentation due Sunday.* I immediately offered to video chat with the class given I’ve been wanting to explore some of my live video capabilities with the ds106.tv new rig. Turns out that wouldn’t be possible for logistical reasons, so Alex asked if I might be able to put together a quick video. I jumped at the chance given I’ll be talking to the folks at GO-GN on Wednesday about digital identity live via video, and I’m always looking for real world opportunity to test out my live video presentation these days.

Above is the video I created for Alex to share with the class which came out better than I thought it would, quite frankly. Below is a quick explanation of my process so I don’t forget how I did it. Narrate your process, people!

It’s probably no surprise to anyone reading this blog that I have been knee-deep in video and radio broadcasting since lockdown here in Italy. It’s been a blast, and I finally feel like I have things locked-in enough to comfortably stream a presentation live using OBS with a mutli-scene setup. So, here is what I did for the above video. I already had two basic shots I use for most of my stream videos that have me first appear on the TV in the Console Living Room: 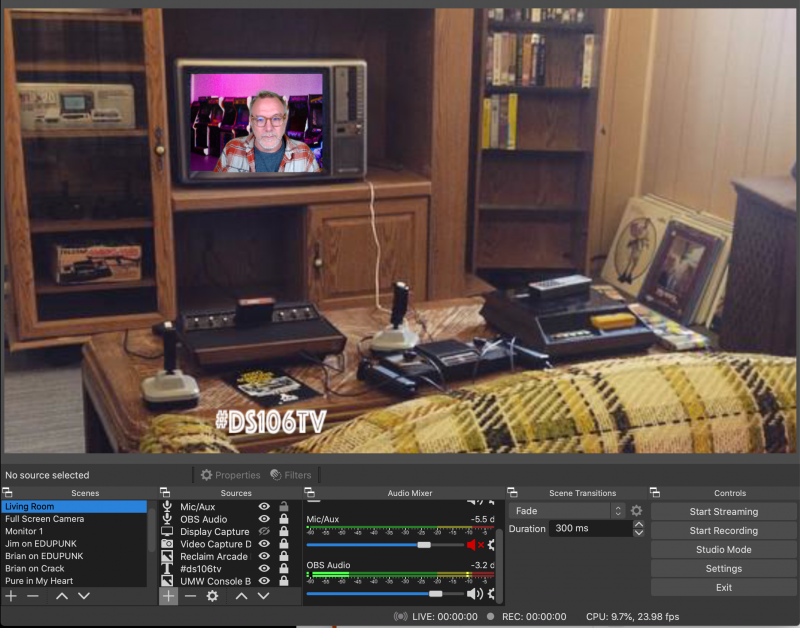 And then a fullscreen shot in Reclaim Arcade: 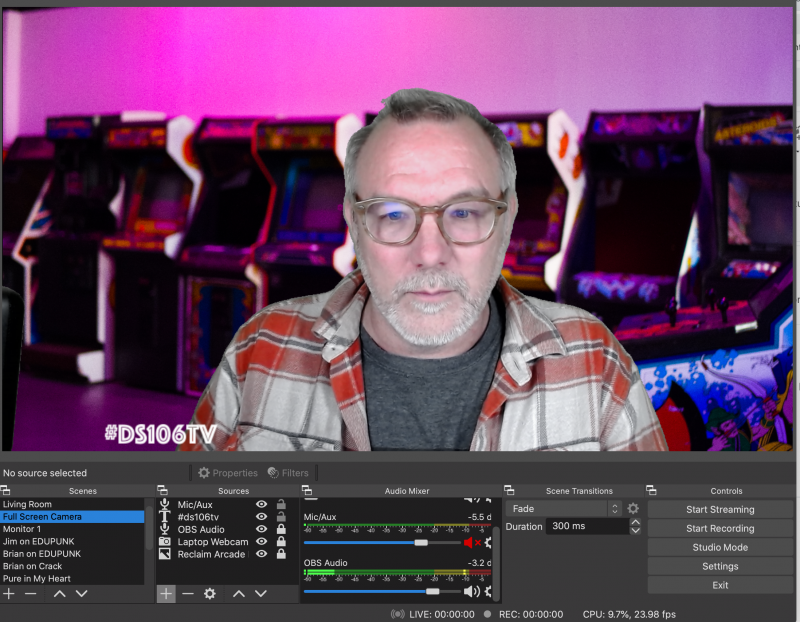 A point worth noting here is that I now have a green screen that allows me to add the arcade image background seamlessly. But, even better, I was able to add a transparent background, thanks to the green screen, to my presentation of images and video so it looks like I am layered on the content. There is a connection when doing this that seems so much more unified than being within a picture-in-picture frame. 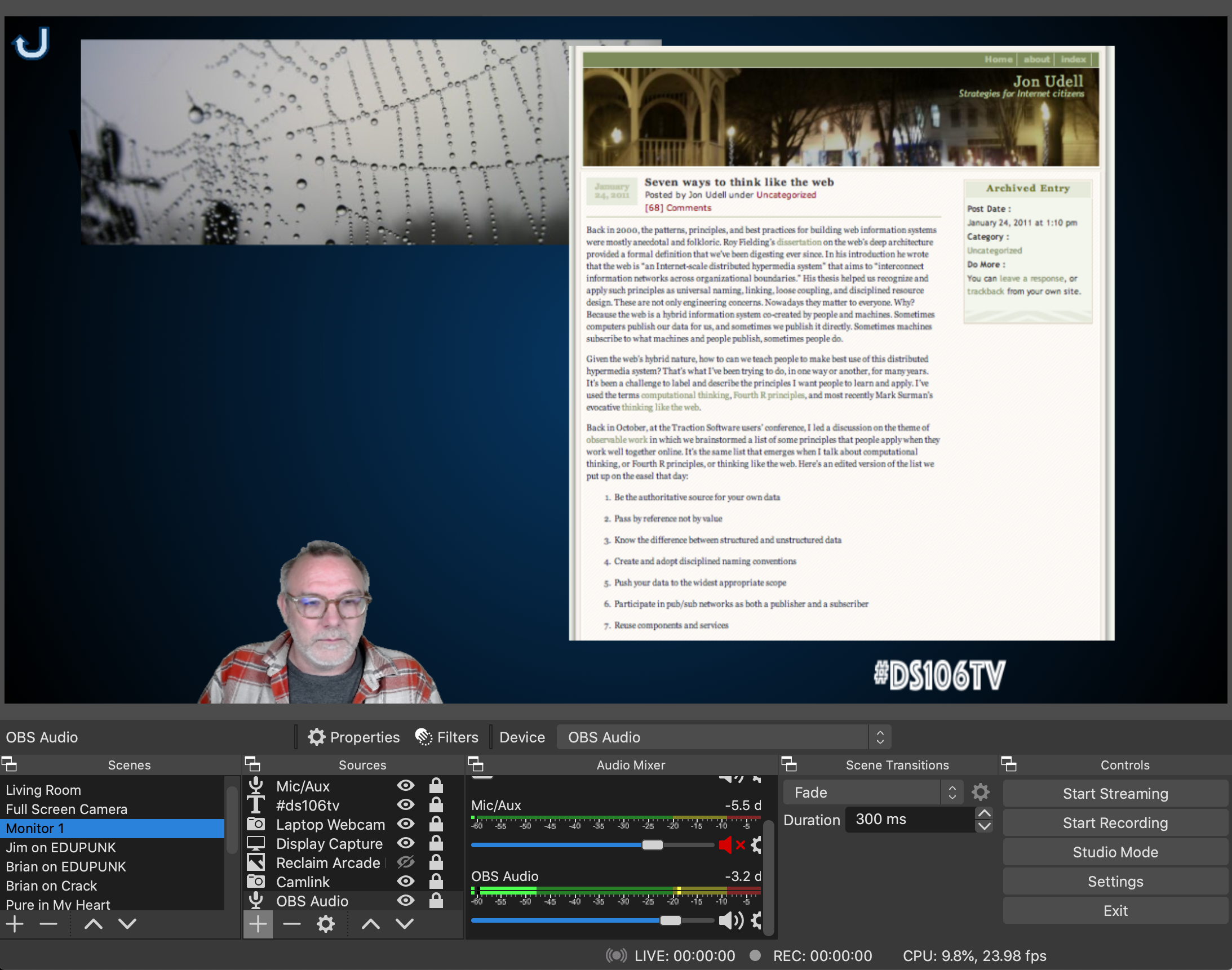 As you can see above, the slides are behind me and I can talk to my points as if I am there. I did this by capturing one of my two monitors with a full screen browser that has Google Slides open in presentation mode so that I can advance through images while talking quite easily (Tim mentioned a setup he heard about where someone used the iPad to swipe through slides which would probably even be easier). I’m pulling in the audio from both by mic and Google Chrome using a virtual audio input from Loopback called OBS Audio (the Mic/Aux input in OBS is muted). 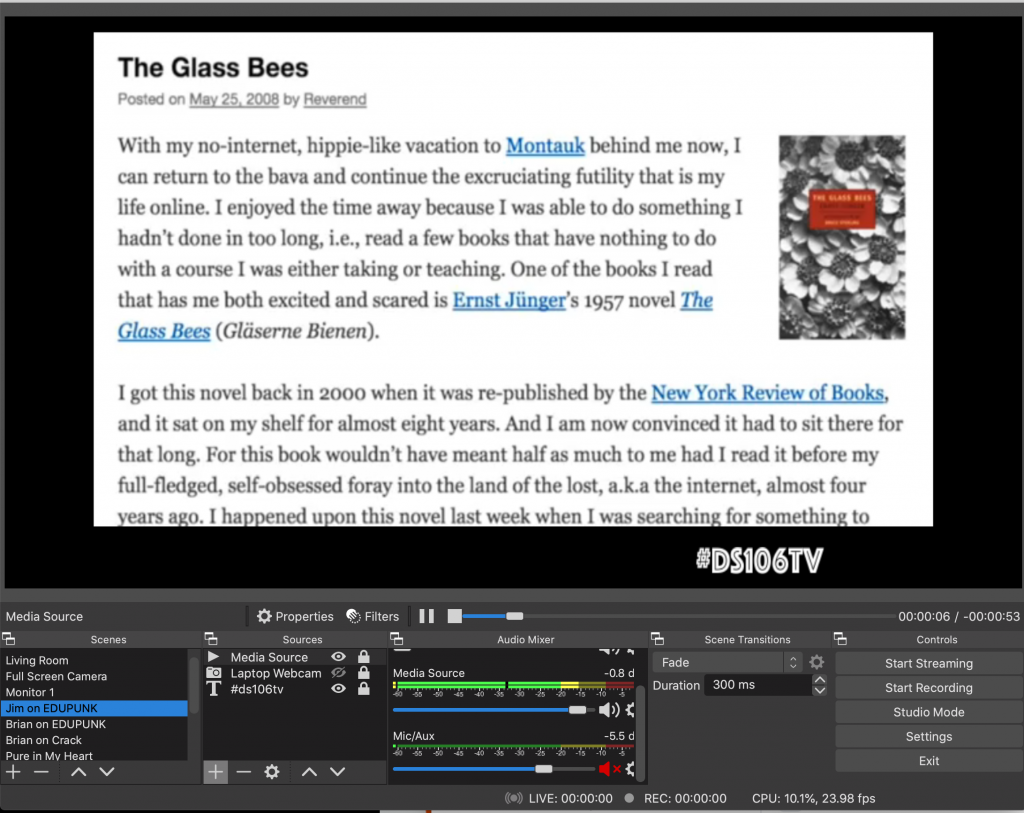 So, that is all fine and good: I created an establishing shot, close-up, and then a slide presentation view. The next step was integrating video seamlessly into the presentation, and to do this I grabbed a few fun clips from Alan Levine’s awesome EDUPUNK mockumentary to make a couple of points throughout the talk:

Grabbing the video with my Youtube downloader site was simple, now I wanted a few shots of Brian Lamb and I talking about EDUPUNK, particularly Brian 🙂 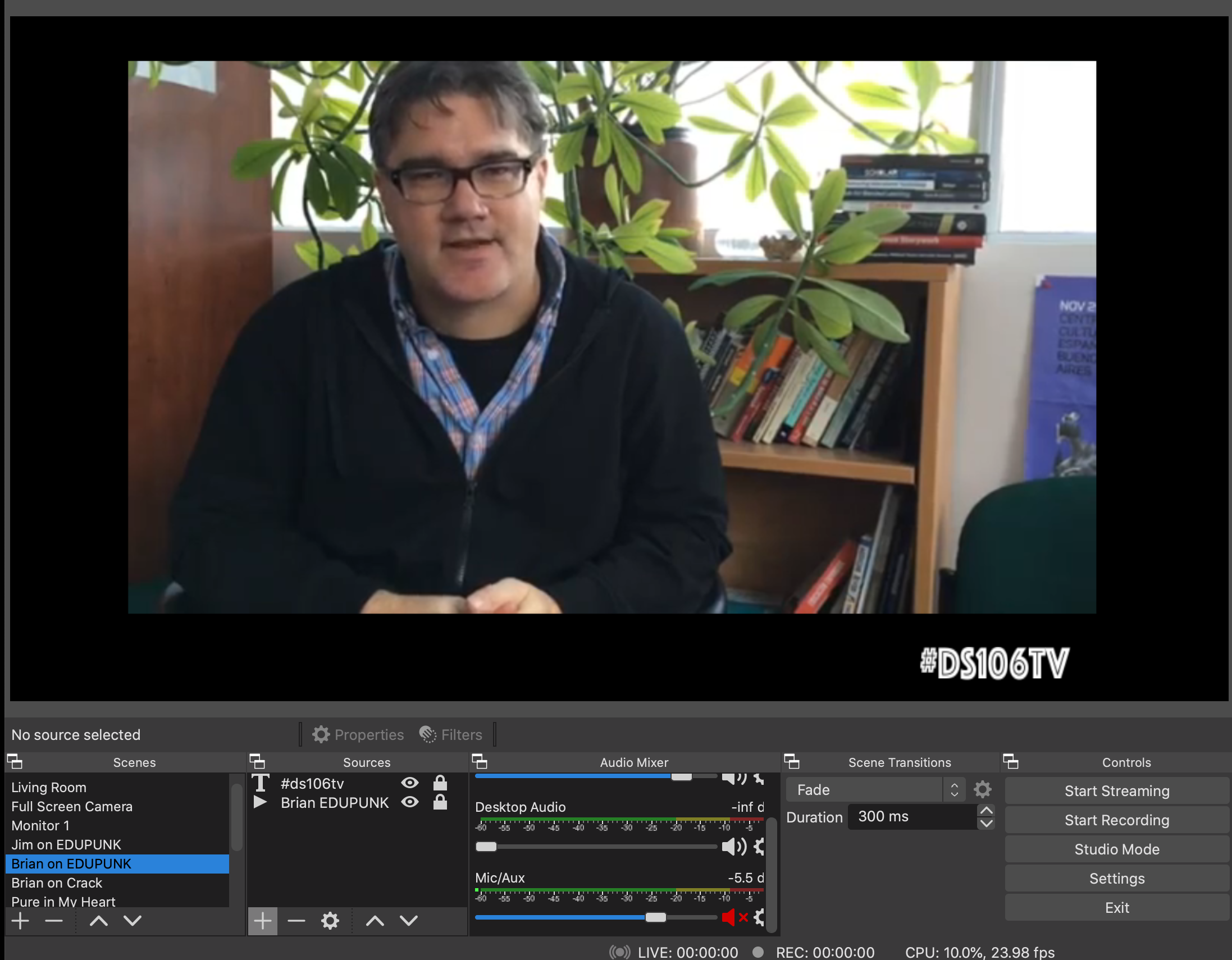 I originally tried creating a playlist in VLC and pulling in that application as a shot but the videos’ audio were out of sync, and it was awkward to control. Instead I created each video I would be using as a separate scene and loaded the shot as a Media Source directly from my computer, and that worked seamlessly. The only thing I had to do is make sure audio monitoring was on in Advanced Audio Settings for each video given I could not hear it while it played back: 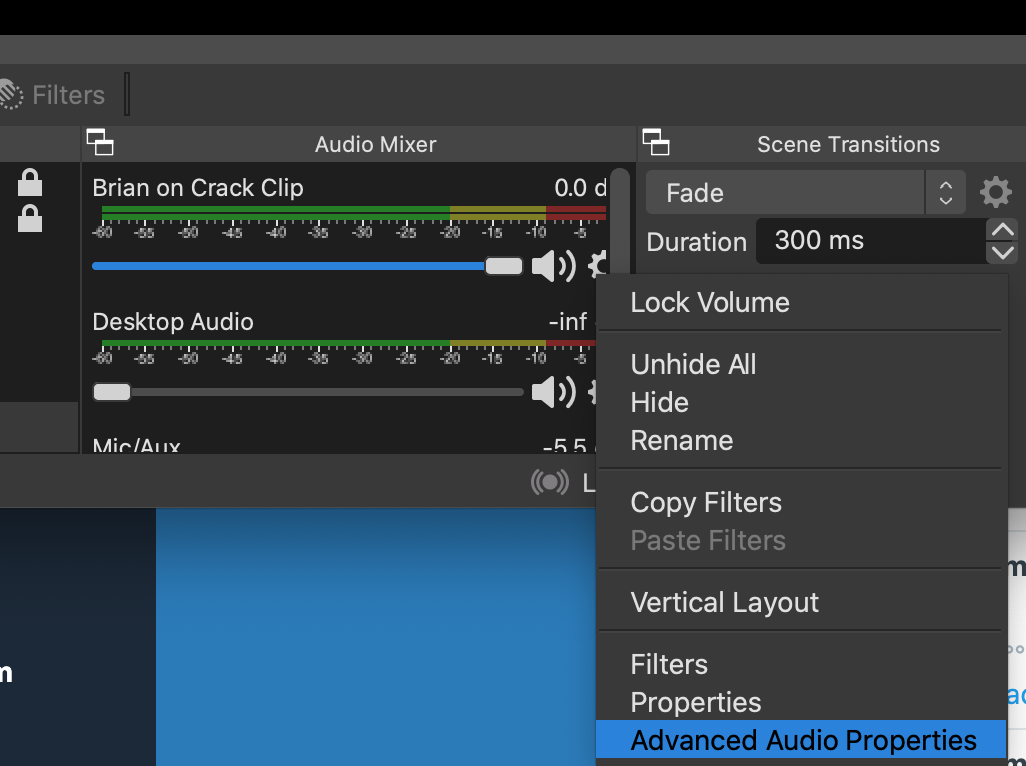 And the final piece that made this go as smooth as it could have gone for me, was mapping each scene to a button on my new Elgato Stream Deck that allowed me to seamlessly change scenes back and forth from video to presentation mode without any issues: 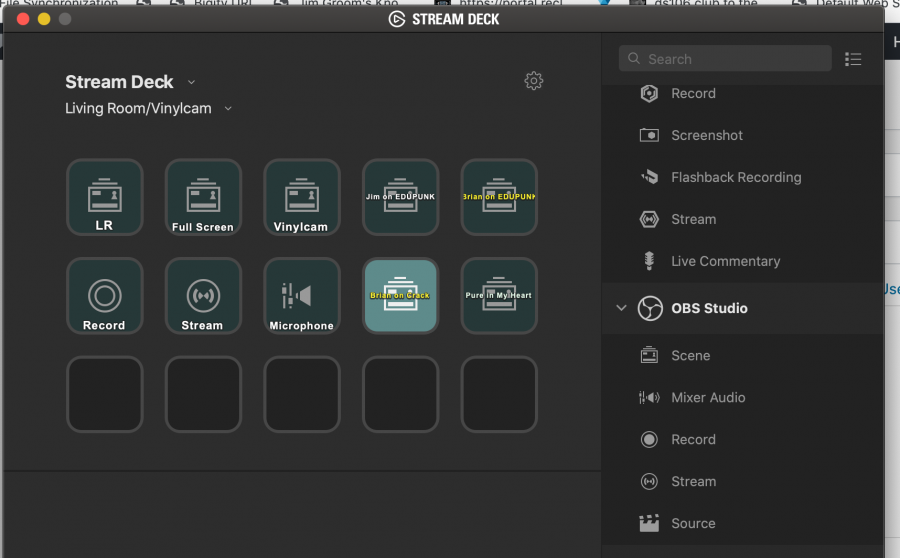 This is the software that allows me to drag and drop an OBS scene on Stream Deck, which is actually a hardware device that sits on my desk with 15 buttons that I can manually switch between shots, allowing me to essentially be a one-man video streaming presentation band. 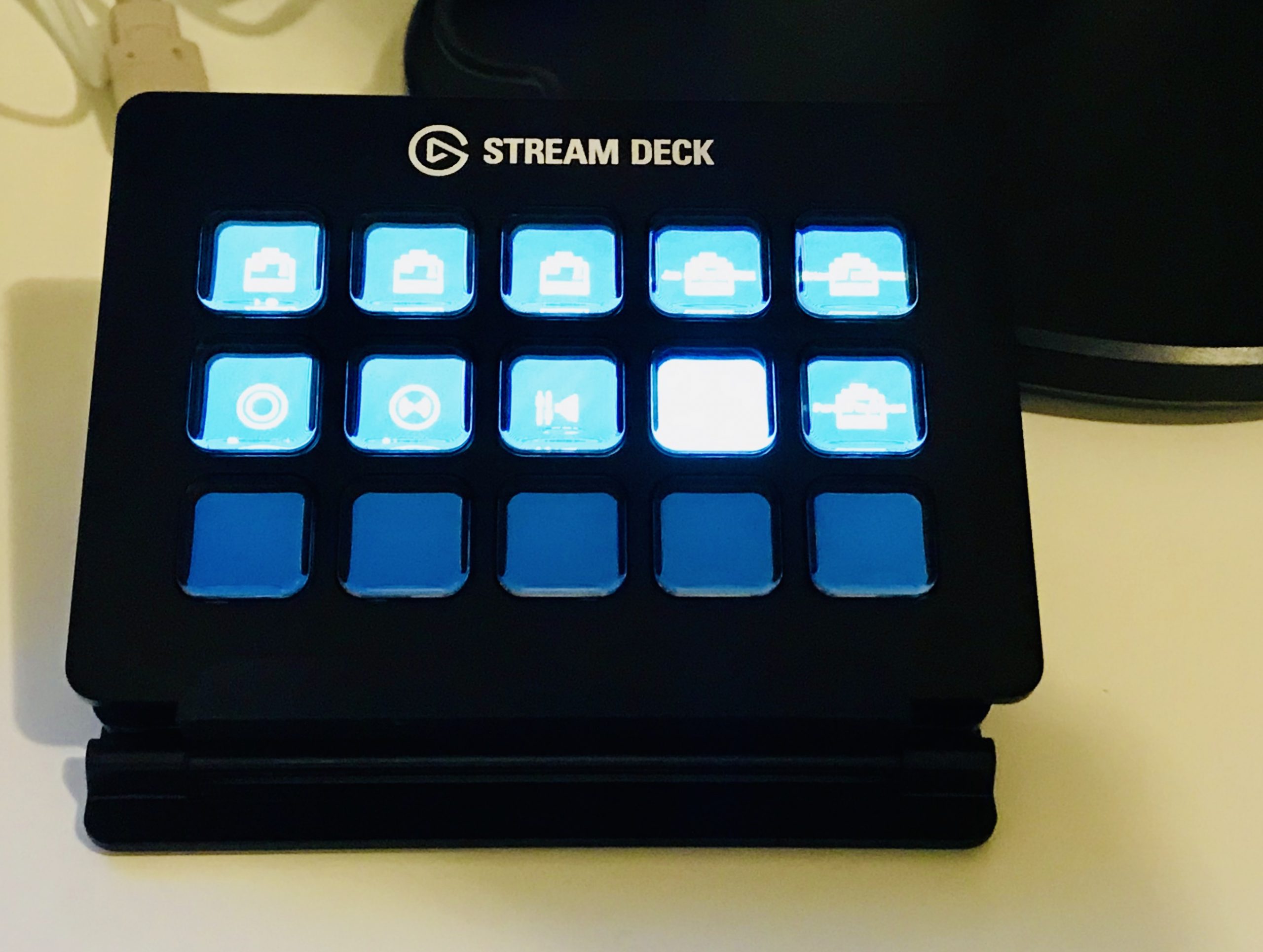 It’s a beautiful thing, and I am quite happy with the final results, warts and all. I guess I should have talked about EDUPUNK, but I kinda feel like experimenting with how to present dynamically via a remote video stream quickly and relatively cheaply using open source software like OBS makes the point in this COVID-19 moment more than anything I can say. The spirit is alive and well on the web, despair is just one option 🙂

*It’s rare anyone reaches out about EDUPUNK given it’s over 12 years ago now (crazy), so I jumped at the opportunity to talk about it.

4 Responses to 5 Questions about EDUPUNK