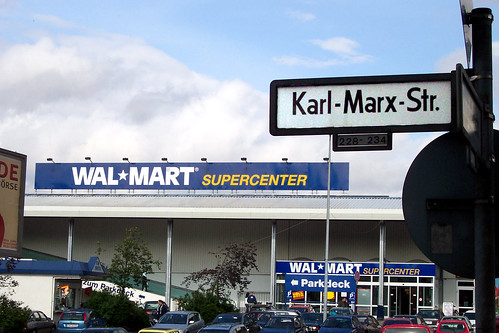 While talking with my neighbor Kent Ippolito a few weeks ago, the conversation somehow found its way to a fascinating fact I had never heard before, namely that Wal-Mart has for decades had a policy that allows RVers of all types to stay in their parking lot for free. And while the policy is contingent on the particular locality and city ordinances, on the whole Wal-Mart’s parking lots around the nation provide a clean, well-lighted place to spend the night. While I tripped on this idea (and I still am), Kent threw in the idea that it made total sense, “It’s the Company Store model, give your customers a free place to live and lock them in to getting everything they need from you.” And while the Trucking system model is a bit different as played out in the 18th and 19th centuries with the rise of industrialization, it’s funny how that same model can be imagined on top of our current box store/super center logic which becomes devastating in some fundamental ways to the health of our economy, small businesses, and any trace of variety and/or quality. It’s all the same: a clean, well-lighted place.

I love the whole image, I keep on thinking about a Road Warrior-inspired film adaption that has the surviving, post-apocalyptic depression-era population living in and around Wal-Mart parking lots around the country, circling and threatening the occupants of the store to give them the goods (preferably via bull horn with a crazy Jason hockey mask on). It would be the most-intelligent re-make of the Road Warrior ever, and the Mel Gibson character could find some way to get all the groceries out safely—a triumph for American ingenuity and capital. You know you love it!

So, after all this imagining I finally sat down to see what I could find out about this widespread phenomenon, and surprisingly there is some stuff out there, but not much. The gems I did find were, predictably, from YouTube.

“This is Nowhere” is a two minute video that frames the nowhere horror of retired people camping at Wally World. Highly recommended at a manageable two minutes.

“Wal-Mart RV camping Site” features a father filming his son goofing on the idea that they’re pretending to be rednecks by RVing in a Wal-Mart parking lot. This is a nice view of the landscape and this strange sense of the fascination with the idea–which I deeply share.

“Brianna” is a 24 year-old homeless woman who is living in her motorhome in a Wal-Mart parking lot. She’s smart, articulate, and down on her luck, moreoever she frames her predicament and the reality of living at Wal-Mart quite smartly.

“Overnight Wal-Mart, Deming, New Mexico” is a fascinating video that documents a Wal-Mart parking lot early in the morning. The videographer notes that he was assisted by security at this Wal-Mart when pulling in the previous night, and I must admit it’s fun to listen to him talk to about the various RVs—he’s even named his own “Oliver”—suggesting there’s a rich subculture there I am just scratching the surface on here.

This Less Pain Forever video is a serendipitous bonus. This two-man band travels around the US and Canada in a black motorhome performing in any and all Wal-Mart parking lots they can.

And the final video is worth it for the goofiest, most out-dated commercial introduction I’ve seen in a long time done by a guy who calls himself “Coolaphonic Dude”. The video is from RV bloggers who are honeymooning on the road around the US and Canada, and discuss the phenomenon of Wal-Mart camping.

So, after all that I finally want to come to my point, which is a reply to the pale pragmatism and flat sensibility that fuels articles like Mike Notess’s piece in eLearn Magazine’s opinions section titled “Not Dead Yet: Why the Institutional LMS is Worth Saving”. What we have there is basically a capitulation of possibly the single most important development of the last 500 years for teaching and learning (i.e., the internet) fatalistically re-framed and simplified by the unavoidably practical benefits of the LMS. In other words, the fact that universities have become hooked on LMSs, the same way the US got hooked on Wal-Mart, is nothing less than catastrophic when we think about how woefully behind K-12 and higher education institutions are when it comes to integrating the internet into the art of teaching. Institutional LMSs engender policies of pragmatism and efficiency, and people at institutions arguing erroneously for the for the “LMS path of least resistance” are doing far more harm than good to the culture of education right now, and the idea of pitting “EDUPUNKs” against the pseudo-corporate logic of double-talk that notes I’m not against innovation, I just want to help the LMS get better for its remaining few years seems misdirected. What? How is that at all useful? What are universities hospice for LMSs now? They’re either dying or dead already, jump off that burning ship now!

We have simply invented the means of their relevance through a continued insistence on alienating what we do in the classroom from what is happening a mouse click away. To truly bring educational institutions to the next stage of distributed and networked learning (which is the future!), we have to start by killing LMSs and investing that money and more into people how can work with faculty, staff, and students to re-imagine the art of teaching, learning, and sharing in relationship to that little thing most LMSs seem to disregard all together: the internet! We have been learning in the clean, well-lighted space of Wal-Mart’s parking lots for far too long, let’s go to a camp site, if not the wilderness, and rough it for a bit so that we can actually enjoy the very reason why we started on this trip in the first place, the democratic vistas of possibility!

We don’t invest in companies to transform higher Ed, for that we need to invest in people. And a pragmatic attachment to the LMS will only further the predominance and consolidation of forcing people into corporate monoliths like Google—a reality which does scare me as much as it fascinates me—but most certainly makes me value the possibilities educational institutions have for re-imagining that future of education—one they may not have for that much longer if they continue to divorce their work from the source of that transformation.

7 Responses to The Company Store