The Digital Legacy of the 1980s: Super Mario Bros. 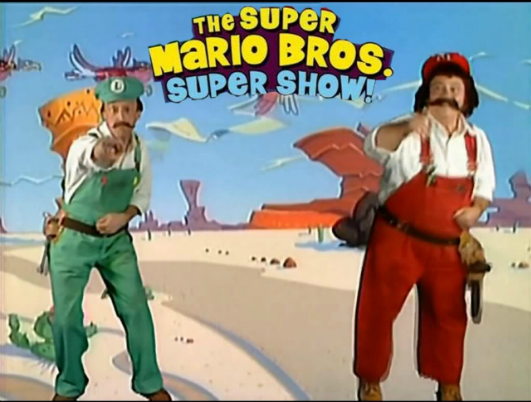 My kids and I explore movies and series on Netflix to watch on a somewhat regular basis. And while I’ve been underwhelmed by their live streaming library as of late like everyone else,  we recently stumbled upon The Super Mario Bros. Super Show! It’s a television series based upon Nintendo’s Super Mario Bros. (1985)—a game so popular that for more than two decades it remained the best-selling video game of all time—that splits it’s time between live action sitcom and animated episodes. The 1980s WWF wrestling legend Captain Lou Albano plays Mario and Canadian actor Danny Wells plays his younger brother Luigi.  What’s been trippy about watching these episodes are the special guests like Sqt. Slaughter, Lyle Alzado, and Cyndi Lauper—it doesn’t get much more 80s than that list.

Below is the episode guest starring Cyndi Lauper, who comes to Mario and Luigi in search of Lou Albano (love the play there).  I highly recommend the first two minutes of this classic bit of 1980s TV culture, so bad it’s good.

After watching this episode it hit me like a diamond through the forehead: that more than any other bit of popular culture from the 1980s the Mario Bros. franchise remains the most predominant piece of popular culture from that beautifully indulgent decade. How crazy is that? I would argue more than Michael Jackson or Madonna, more than Pacman or Donkey Kong (though that’s where Mario got his start 🙂 ), the Mario Bros. franchise remains the most potent popular culture strand to survive from the 80s—just look around you. The video games still sell like mad, kids from multiple generations identify with Mario, Luigi, Bowser, etc., the shirts sell at box stores like Target and Wal-Mart. And what’s craziest is that there is no sense of nostalgia surrounding it at all. Mario is not trapped in the body of Lou Albano anymore, rest his soul, but rather kicking ass across the Galaxy.

All this despite the cheesy TV series was produced (which my kids and I love by the way), the bad 90s movie was made, the innumerable throw away dolls were sown, and on and on and on. Mario as a cultural icon remains a fascinating thing for me, in fact one of my favorite video games of all time, Freedom Fighters (2003), is inspired by Mario Bros., but takes that cartoon fantasy world and transforms it into a kind of Italian Neo-Realist narrative that had me longing for the simple days of a cold war narrative in a post-9/11 Iraq War world (this too was a Mikhail Gershovich influence—he is very good!).

And while some will point to Star Wars (1977) as the paramount pop cultural phenomenon of the last 40 years I would have to agree, but also argue two things: 1) the Star Wars legacy jumped the shark in the late 1990s with the prequels and while it remains a monumental work of popular culture it’s momentum as a franchise was greatly impeded by Lucas’s inability to stop himself, and 2) Star Wars is very much rooted in 1970s culture—and it remains the legacy of pop culture for that decade most certainly—it does not have the same tractor beam-like hold on the 1980s.

But regardless, what is most interesting about this comparison to me is the iconic pop cultural artifact from the 1970s is a film while from the 1980s it’s a video game—it’s digital.

1 Response to The Digital Legacy of the 1980s: Super Mario Bros.