Taking a page from Guilia Forsythe’s blog, I figured I’d use the ds106 99 to start archiving a number of radio shows I did over the last couple of months. I literally have gigs and gigs of broadcasts in my Nicecast archive, so what better way to eat up a few blog posts than by posting archives of various shows I did here over the course of the semester. 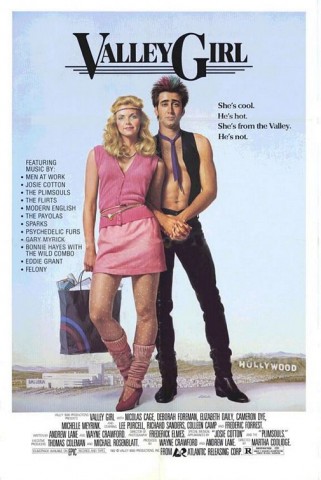 Back in February, the 20th to be exact, I was playing around with yet another radio show on ds106radio, this one dedicated to film soundtracks. I actually have a plan to bring this one back from the dead, but until then I’ll just get the archives up. My first show was about the John Hughes film Some Kind of Wonderful (1987), and I’ll try and post that one as well soon. But the show about the Valley Girl (1983) soundtrack was where I thought the idea was starting to get a groove. And while by no means perfect, I can’t hate the 80s too much, it’s my formative decade. And few soundtracks/films are more representative of this decade than the 1983 classic Valley Girl—and what should’ve been simply a cheesy Hollywood film attempt to cash in on the craze inspired by a misreading of this lampooning of the phenomenon by Frank Zappa actually turned out to be one of the better pop films of the decade—go figure.

Anyway, here is some vintage ds106radio featuring the Soundtrack of Valley Girl with a pretty fascinating news feature about Frank Zappa’s song that got the whole nationwide craze started, as well as his thoughts on the the whole thing. Good stuff.

Mikhail Gershovich suggested I name my 80s-themed shows Radio Free Ferris, and I think that might have legs. One other thing, I keep saying Valley Girl is 17 years old which is simply a sign I don’t want to come to grips it is almost 30 years old—forgive me.