I’ve been getting pretty excited about the Console Living Room exhibit we’ll be doing in UMW’s Information and Technology Convergence Center starting the third week in March. Earlier this week I went down to Petersburg to pick up a 25″ Quasar TV from the early 1980s—my best guess is 1981. 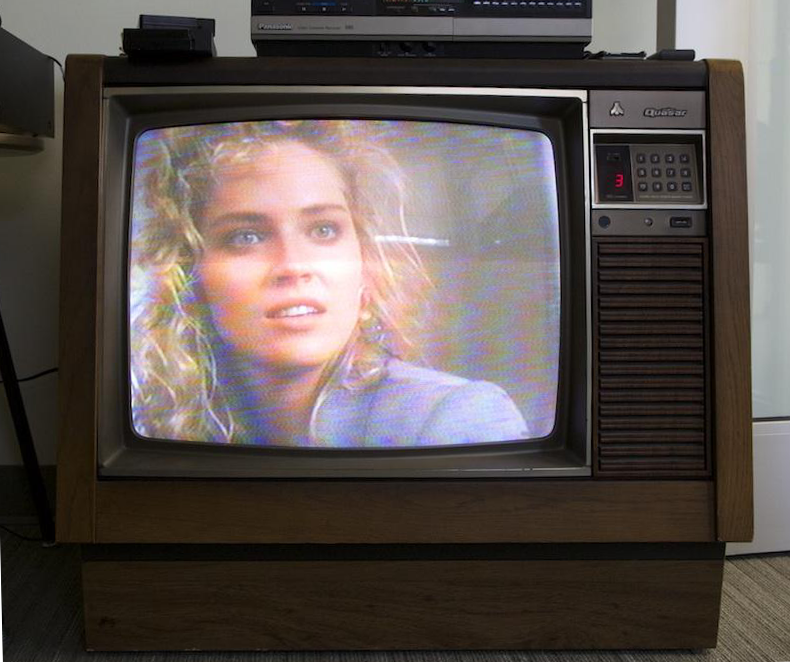 The color is still quite good, and I was struck by how different the picture quality of tube TVs is. When high resolution TVs came around there was no looking back, the sharpness and resolution was light years ahead. But looking at the Quasar there is different aesthetic, a softness and blurring of colors—almost impressionistic quality. It’s far more dreamlike than I ever remembered, but this might be the nostalgia talking.

Speaking of nostalgia, the centerpiece of the exhibit (at least for me), will be the 1985 Panasonic Omnivision VCR that was delivered to my house on Monday night. It’s the same exact model VCR that my family owned throughout my high school years. This was a period of my life (1985-1989) that I watched a ton of movies on VCR, and this machine has some serious time capsule qualities to it for me. 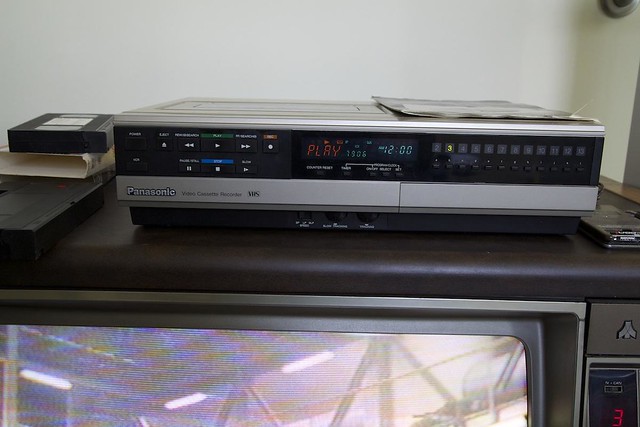 I also associate this machine with video store culture before the corporate hegemony of Blockbuster made them uninteresting and all but irrelevant. The mom and pop video store was an integral part of the social reality of my teen years. I would spend time there with family and friends picking out movies. It was part of our routine as teenagers, and I grew to love them. I would browse the box covers for hours, and that scanning was an education in and of itself. I was exposed to art, titles, and ideas I hadn’t dreamt of before, and there was always the illicit, sleazy room at the back of the store that was the stuff of lewd “adult” legend. 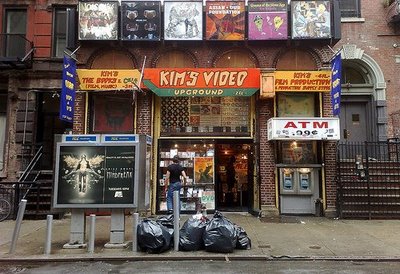 And lest we forget, for almost two decades the VHS was the reigning format champion of the converging home theater. And 1985 marked a moment wherein the VCR started to become more affordable, according to this article in the Wall Street Journal (reprinted in the Chicago Tribune) on September 22, 1985.

When the machines were introduced in 1975, the average VCR cost between $1,000 and $1,400. But prices have fallen significantly–15 percent in the past six months alone–and now a wide selection sells for $200 to $400. “We occasionally advertise a bare-bones model at $169,”  says Richard Lewis, president of Newmark & Lewis Inc., a 26-store consumer-electronics retailer in greater New York City. Robert Amhoff, a J&R customer who paid $750 last Christmas for a top-of-the-line NEC brand VCR, is now pricing the same model for a friend. “It`s down to $569,”  Amhoff says. “It`s incredible.”

The price of VCRs 35 years ago was pretty steep. Check out this 1981 Montgomery Ward ad for a VCR priced at near on $1000 (owe someone in my Twitter feed credit for this gem, but alas Twitter’s search sucks and now so do I): 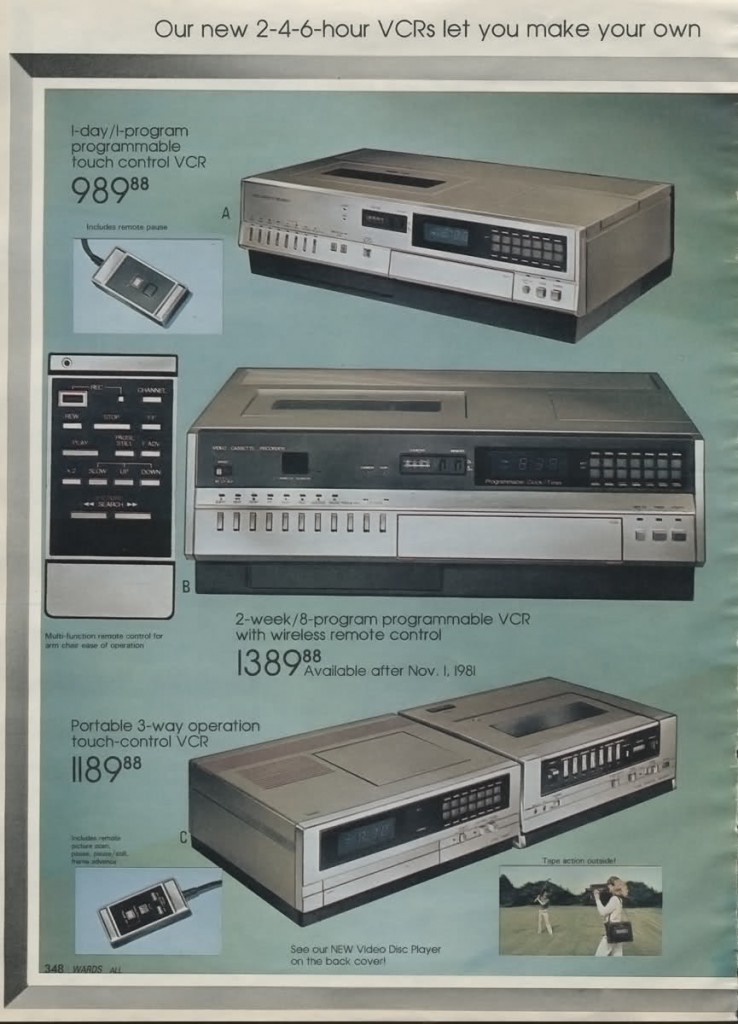 Once I got the VCR setup on the Quasar TV, I had a weird moment of confusion, I wasn’t sure how to do it. I finally hooked it all up and the sound was working but the picture was shot. Luckily, Andy Rush kept a video head cleaner tape around after all these years and it did the trick. It also led to a conversation with Andy about how he used to use the VCR for instructional technology back in the day for recording shows for classes—but that’s a paleoconnectivist post in the making. 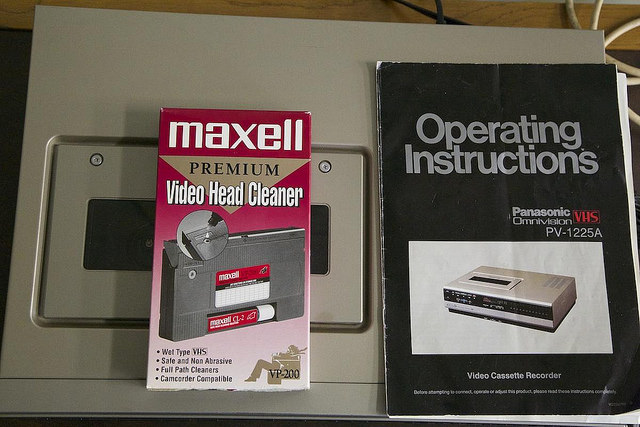 I did finally get everything up and running and the first VHS tape I played (from my library of hundreds) was Total Recall. I figured it was appropriate 🙂 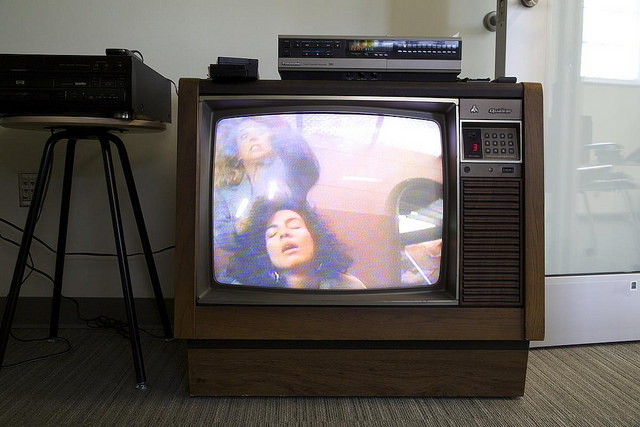 This entry was posted in Uncategorized and tagged 1980s, omnivision, umwconsole, VCR. Bookmark the permalink.