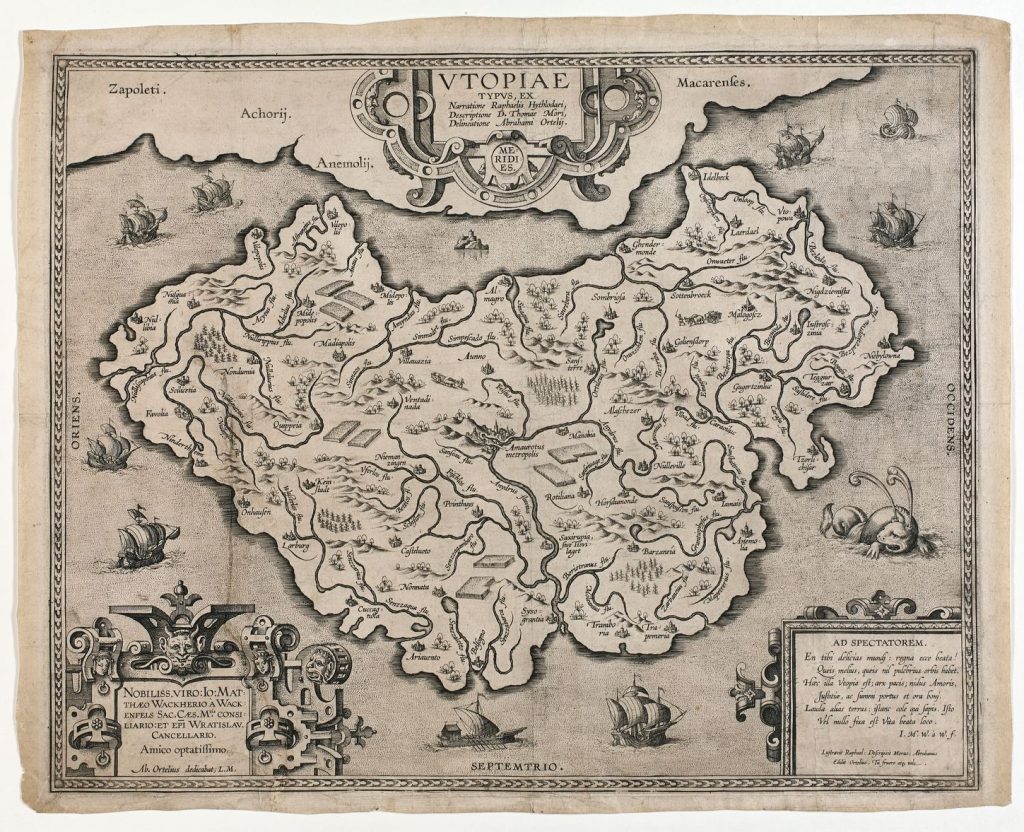 It wasn’t a given by any means, but Lauren Heywood and I were able to pull off a second episode of Utopian Tendencies on ds106radio. It’s still early but I am enjoying listening to it take shape. The process is pretty simple, Lauren send me some ideas that usually include an essay or two. This week she sent along a link to the Wikipedia article about Sir Thomas More‘s book Utopia (1517), which led to some reminiscing on my part of an English Literature survey course I took in undergrad.* There’s so much there, but something that stuck out for me between More’s Utopia and the other piece we read in preparation for this discussion, Ingrid Burrington’s essay “Effortless Slippage,” was the idea of enclosure of land in England (something Utopia can be read as a criticism of) that paralleled brilliantly Burrington’s discussion of the enclosure of the public/national spaces of the web into private, extra-national, commercial web platforms.

In fact, the role of mapping is crucial, and from there the discussion discussed everything from Friedrich Engels’s The Condition of the Working Class in England in 1844

As it relates to Burrington’s ideas of platform disinformation bubbles and media literacy:

The tendency of users to remain in filter bubbles and propagation of myopic communities via platforms and recommendation engines has been well-documented, as has the tendency of these narrow environments to enable mass harassment, misinformation, and propaganda campaigns. In response, companies offer resources on media literacy and piecemeal hiring of content moderators or fact-checkers. But placing the onus on individuals to season their news feeds with opposing viewpoints (rather than, say, designing a platform optimized for bringing multiple viewpoints to users) or assuming the issue is the ability to critically discern sources (rather than recognizing that many users are entirely media-literate but happen to hold racist or fascist beliefs) suggests platforms consider power something that the invisible hand of the market has clumsily pushed them into against their will, and not something abused in the absence of a meaningful praxis. Furthermore, it assumes that greater legibility of a user and their nuanced perspectives is a desirable outcome. Users have agency to reshape the territory of their digital bubble, but they remain mapped subjects.

Burrington challenges the idea that media-literacy alone is enough to deal with the information platform dystopia we are currently experiencing, and it made for a nice point of discussion. We also talked about Neil Smith’s idea of the Revanchist City in relationship to the pioneering spirit of John Perry Barlow‘s 1996 techno-utopian manifesto “Declaration of the Independence of Cyberspace,” which I have not yet read. I also was struck by the start of Burrington’s essay that discusses the initial impulse of top-level domains (TLDs) as state and nation-specific, such as .ny.us. And the colonial impulse towards the commercialization of TLDs which reminded me of this awesome site by Citizen-Ex that discusses the troubling recent history behind the .io domain extension, amongst other stories.

Our discussion of mapping networks made me think about Nicole Starosielski’s The Undersea Network, which is a book I still want to read. That said, I did listen to an interview with the author and blogged about it for the CUNY Academic Commons. As you can tell from these “notes,” the conversation was fairly unwieldy (which I love!), and Lauren’s choices to spark the discussion were spot-on and led to a wide-ranging discussion that inspired all sorts of ideas that I am still mulling over. Mission accomplished!

*In fact, returning to college was a theme for me in this show, I kept thinking about the time when I read literature, interesting essays, was pursuing a Ph.D.,and even taught literature 🙂 I spent many a year doing all these things, and the last 7 years or so has been head down helping to build Reclaim, and this episode was a welcome return to some of the things I really love: reading literature, thoughtful criticism, and gabbing about them. Who knew?