So the experiments continue at Reclaim Video with making this a fully functional, web-based VHS store. It is non-sensical, but that is kind of the point. We heard that streaming might be all the rage i the future, so we wanted to get out ahead of the curve given our long-term existence may depend on it. As Tim already noted in his recent blog post our streaming love affair with Youtube for Reclaim Video did not last long because you can’t have a real cultural relationship with an ID Content bot. So, as Tim is wont to do, he setup a Stream of Our Own using Ant Media Server and now we can experiment in peace*:

….as luck would have it the great Tom Woodward blogged about a new (to me anyway) software called Ant Media Server. Completely open source (it’s a fork of Red5) and it was a very straightforward setup on an Ubuntu server which I had spun up on our DigitalOcean account. Within just a few minutes I had a new RTMP stream URL that I plugged into OBS and we were back in business, now on our own system.

So, we were back in action with the stream and Thursday and Friday of this week led to more experimentation. Namely, how could we remotely program and get videos to play on the TV in Reclaim Video given we can already control most of the store remotely (lights, signage, power, etc.). So, given we have a archived video versions of VHS tapes that are being pushed to the TV via a Raspberry Pi, during Tim’s experiments he realized we can actually have the livestream pull directly from the archived VHS tapes video and audio, which avoids some of the glare and scanning you get with the nest camera pointing directly to the camera. And as Tim’s Tweet below suggests, anything on the livestream at http://reclaimvideo.com/live will be exactly what is playing on the TV in Reclaim Video.

I now have https://t.co/ikoWdPxTCk setup as a live feed with TV overlay and direct audio. It will always show a livestream of anything that is playing on the physical TV in @ReclaimVideo.

And what is even cooler is using Tunnelblick (free software for OpenVPN on macOS) I can actually login to the local network at Reclaim Video and if I am logged into Plex Media I can decide what films I want to play and they will appear on the television there. To be clear, if you go to the livestream from our Nest camera in Reclaim Video you can see whatever I have selected playing locally on the television:

We have made the stream even cleaner with a direct audio feed and stylized but direct video feed. All that being said, what you’re seeing is actually playing in the physical space at all times https://t.co/EZNpNmSKxo

So, to recap, I can essentially watch and program whatever is happening at Reclaim Video from thousands of miles away, which opens up the idea of guest curators to program and clerk Reclaim Video! 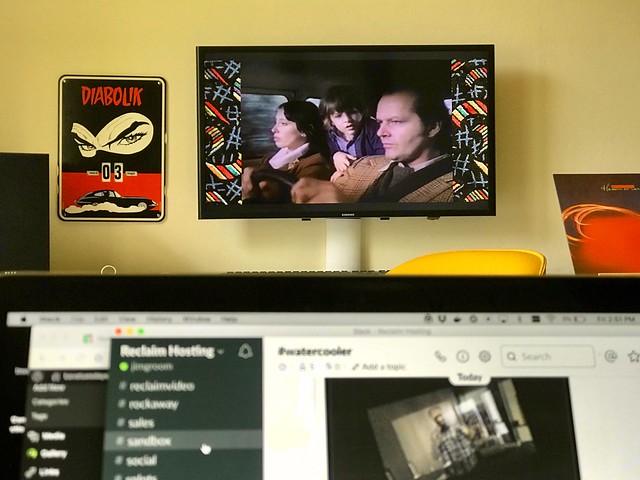 “Don’t worry, Mom, I know all about cannabilism…” Now playing at @reclaimvideo as seen from the home office.

I find myself in dangerously familiar territory on this blog threatening to wax poetic about all this, but the idea of re-thinking streaming video through the frame of an 80s VHS store in order to imagine how we might share the cultural artifacts that have come to shape us within and beyond the web-based marketplace that everywhere surrounds us is truly fascinating to me. There are various frames to the whole experiment, but for the moment I am more than thrilled with the simple fact it gives us the ability to remotely program and curate the Reclaim Video television to our heart’s content. 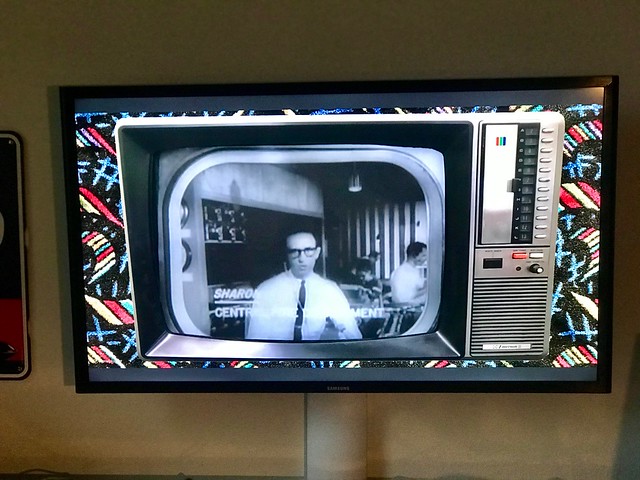 Witnessing the many frames within frames of Reclaim Video while watching The Night of the Living Dead .

*The upside of eschewing overly corporatized social media hubs like Youtube is not only relative anonymity, but opting out of their platforms creates a bit of a buffer from their algorithmic surveillance. Sites of b-cultural resistance 🙂

This entry was posted in Reclaim Video, television and tagged Ant Media, night of the living dead, ReclaimVideo, streaming, The Shining, Tunnelblick. Bookmark the permalink.