A Four-Pack of Carpenter

Update:  There’s a great article on this very retrospective by Benjamin Strong on the Moving Image Source titled “Morning in America.” He positions this retrospective as genre readings of the Reagan 80s, yes, that’s it!

As if you need any more proof that the BAM’s film programming is far and away the best out there, check out the just finished Four-Pack of Carpenter series. These folks are good…very, very good! What I would have given to have been in the BAM for eight hours consuming all of this 35 mm magnificence. It’s probably better that Matt “old gold” Gold didn’t tell me until after the fact, cause I would have just been depressed for four days straight. 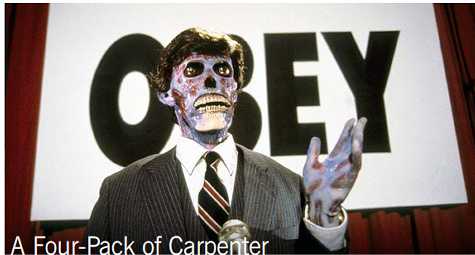 4-Pack of Carpenter at the BAM

The four films by John Carpenter they showed are Big Trouble in Little China (1986), The Thing (1981), They Live (1988), and Escape from New York (1982). Now, I just got done praising the programmers, and I stand by that, but I for one think Big Trouble in Little China and They Live are kinda weak spots in the line-up. Big Trouble in Little China is one of those beloved Carpenter films (for many a favorite) that I never really cared for or understood why so many people liked it so much. I mean let’s be honest, if you are going to have a small retrospective of Carpenter, the four films would have to be Assault on Precinct 13, Halloween, Escape from New York, and The Thing —am I right? Of course I am, Halloween, while not my favorite (that would be an even tie between The Thing and Escape from NY), has to be Carpenter’s most perfect film. It framed the aesthetic, pacing, and camera angles for a whole decade of horror films, and it features unbelievable performances by both Jamie Lee Curtis and Donald Pleasence. In fact, I watched it yet again recently and remain amazed just how well it stands up in every way, it’s the Carpenter film.

Now, I know They Live is going through a renaissance of sorts as of late and I’m all for it, fun film and a great plot concept with the consumer/message zombie/monster thing. Yet, it pales in comparison to the pure philosophical genius of The Thing, or the brilliant plot frame and post-apocalyptic setting of Escape from NY. In fact, I think Big Trouble in Little China and They Live are lesser Carpenter because they move into the intentionally corny, a facet of his film making that by the time we come to a film like Escape from LA renders it unwatchable. Carpenter’s films were always a bit comic book and hokie, it’s one of the things I love about all the movies in my 4-pack. It just seems by the time he got to Big Trouble in Little China the move from horror/sci-fi master to mediocre b-comedy was complete, and the latter didn’t really wear to well on him (with In the Mouth of Madness (1995) being the one exception).

OK, I’ll admit it. This is really just hair splitting, I understand that, I would have gladly gone to all four films with butter-drenched popcorn, Coke, and Dots in hand, greedily stuffing myself while consuming the true beauty of 35 mm Carpenter. This caddy response may be a result of my intense dejection that I wasn’t at the BAM to witness all this first hand. At the same time, we have to maintain a standard for our b-movies, or else everything just becomes artistic schlock 🙂 And as an unintentional side effect, this post has helped me figure out a perfect life for myself: I would run UMW Blogs on the side, and attend and blog every film being shown at the BAM on a regular basis for the rest of my natural life. That, my friends, would be heaven. Sometimes I miss Brooklyn, but I always miss the BAM Cinematèk (looks like the got ride of the whole Cinematèk thing, and are just going with BAM Cinema now–glad they dropped the elitist European name with accent, this is America damn it! We invented film!!!).

8 Responses to A Four-Pack of Carpenter