I took yesterday off for a nice walk in the mountains with visiting friends, which was a real treat. 2021 offered a few glimpses of life after the pandemic with various visitors from across the Atlantic which made life happier and healthier. Looking forward to more in 2022. 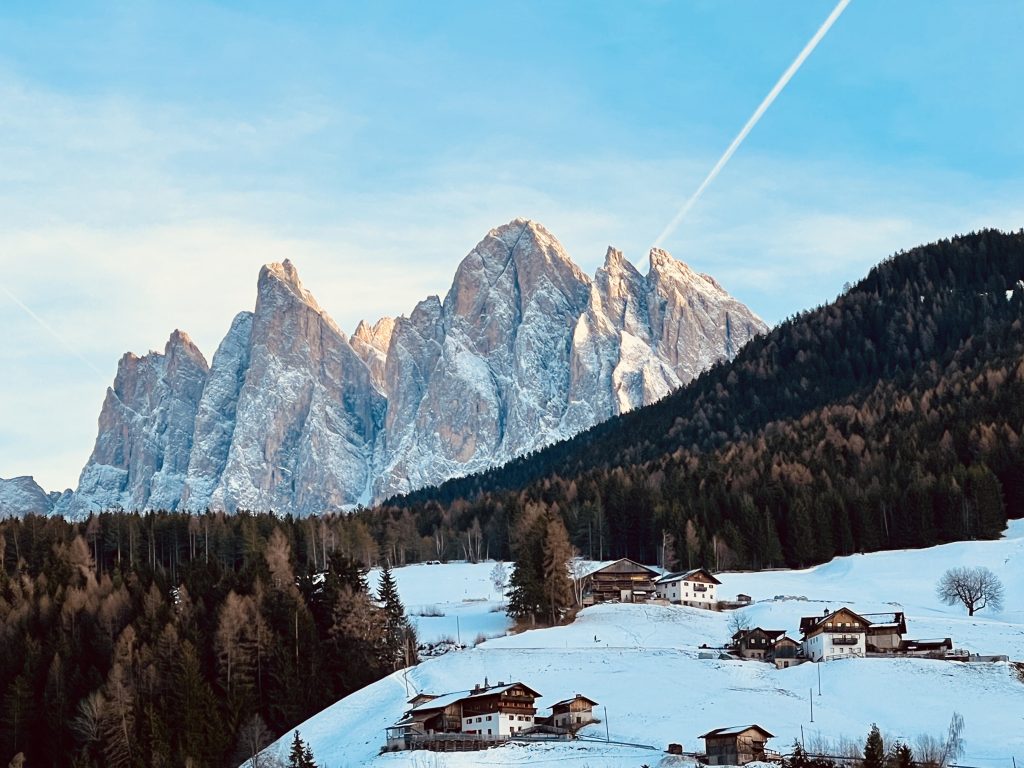 The last week was pretty much dedicated to hanging out with the family enjoying the holiday and playing with some video streaming using OBS, the ATEM Mini switcher and Owncast. In fact, the intense play helped me to turn my weekly reflection post into a 20 minute weekly relfection video (will work on making it shorter in future episodes) which was a lot of fun. Like and subscribe for more!

Taylor Jadin taking us back to netscape in 1998!

In fact, a few folks at Reclaim Hosting have been playing with the Owncast and the various streaming gadgets that come with it, Taylor Jadin had an awesome stream yesterday wherein he introduced me to the open source retro emulation project called MISTer that not only emulates a ton of old gaming consoles with remarkable accuracy, but also does a brilliant job emulating a 486 computer running Windows 95, that was amazing. He was accessing his network with a modem and it was loading at real time for a kilobytes per second connection (56-128k!), and was also proxying websites from 1998 for Netscape that absolutely blew my mind. It would be a brilliant setup for the 1990s living room computer I dreamed of creating for the Coventry Living Room to highlight the early 90s media, which would be framed by the personal PC running Windows 95 somehow wedged into that family space as an invader that would soon colonize all the existing furnishings forever 🙂 The stuff Taylor showed yesterday on his stream returned me to that dream, and I am now going to get myself a MISTer and start playing more with 90s emulation, not to mention Intellivision and ColecoVision—cause the 80s will always be pure in my heart. 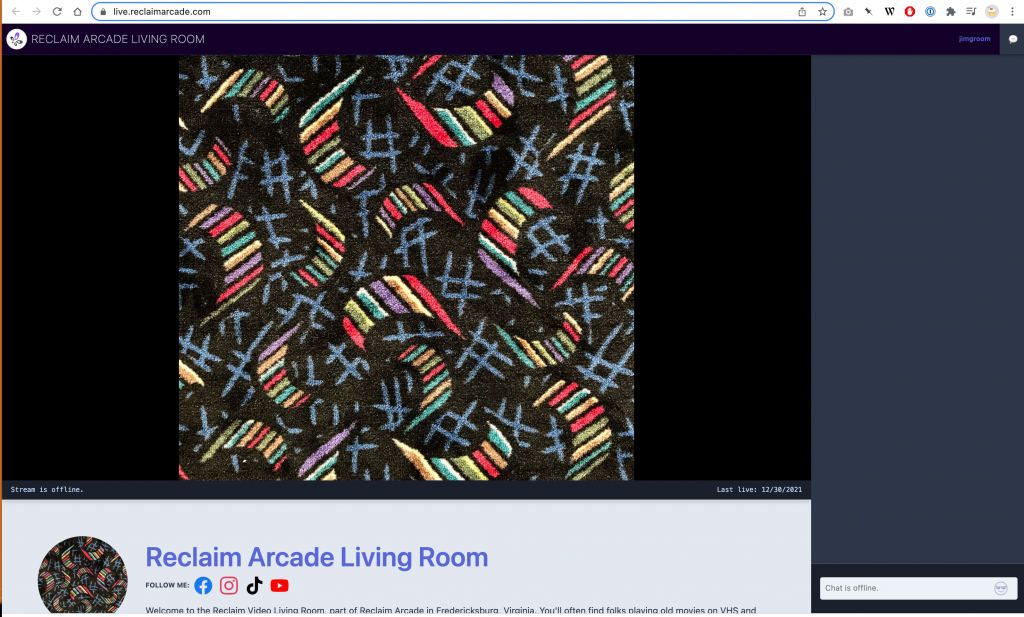 Speaking of the 80s, given some of the fun we were having with streaming in the #watercooler channel at Reclaim Hosting Tim got inspired to figure out a way to stream out whatever is playing on the living room TV at Reclaim Arcade, which is absolutely inspired! The livestream is here, and it will go online whenever the arcade is open, so check it out! You can see folks watching VHS tapes, laserdiscs, or playing the NES or Atari 2600 at any given time. The streaming page has a space for TV image, a shot of the living room to see the folks playing, a nice room mic acting as a bed underneath the film/game playing, and even space for bringing in live chat. It’s a gorgeous stream setup, and Tim figured out how to pull in the chat from Owncast as an embed within OBS, which is awesome. it has been a fun week for streaming, and it is always good to use the technology to enhance and share the passions around, well, the older technology 🙂 Also, I love the streaming cause it helps to fine-tune my video chops helping to keep one’s presentation compelling and engaging, the days of Dr. Oblivion’s monotonous lectures are over! 🙂

Anyway, what was going to be a short introduction became a blog post about streaming, but that’s fine because what will follow are the show notes to the video I produced for this week’s bavaweekly, and the above reflections are stuff that I didn’t cover in that video given world enough and time, blah, blah, blah.

The Reclaim Holiday movie this year was a brilliant selection by our Sysadmin extraordinaire Chris Blankenship: The Star Wars Holiday Special from 1978. It was a real treat despite its association with some early childhood trauma around converting the most amazing thing I had ever seen in 1977, namely Star Wars, into a two-bit variety show. It was amazing to have all eleven of us at Reclaim Hosting together enjoying the film, and I really love our tram right now, we are really well situated to make 2022 an epic year.

A few highlights from the Holiday Special: 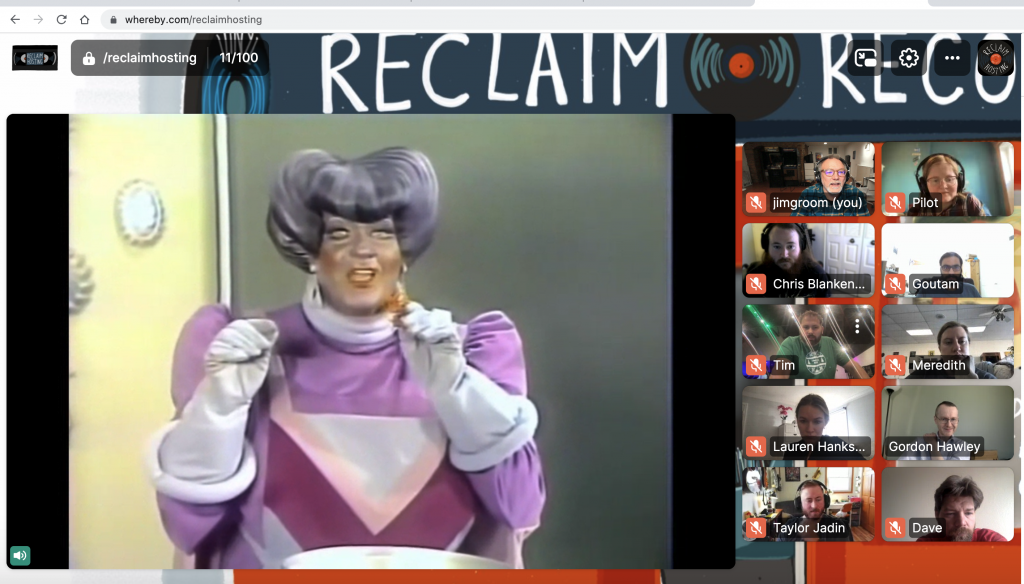 I have not seen this since 1978, so I remembered very little, just impressions of how weird the Wookies looked and the 1970s tree house aesthetic stuck with me. But seeing the comic legend Harvey Korman in a skit about an alien cooking show was amazing, and Meredith noted it was very much in the vein of Julia Child, so good! An Art Carney was also unrecognizable at first, but how cool he was in this!

Also, the Station ID that showed up in the lower third reminding us this was taped at the time, and there is no actual release of this special on any other format. We were watching a copy of a VHS copy from Dayton, Ohio during the 70s, that is epic!

Finally, the matte art for the Wookie house was pretty amazing. it is very inline with the retro 70s sci-fi art I love so much, and a definite precursor to the Ewok villages in Return of the Jedi.

The highlight was the Moebius-inspired animation sequence that officially introduces Boba Fett into the Star Wars universe. You can see it online in its entirety, and it is quite fun if you are into that kind of thing.

That was a good time, and the streaming of the special through Whereby for the whole team was quite seamless, which shows how far all that technology has come in so short a time.

Other than that I intentionally tried to unplug. The Reclaim Hosting team is on-point, and I am truly excited to be diving into building nan instructional technology “division” next year, but free-time to play is what I associate with Winter break—and it is precious to me.

As mentioned last week, the year-end accounting was a bit more over-head this year in-part because Reclaim Arcade was fully operational and quite successful in 2021. 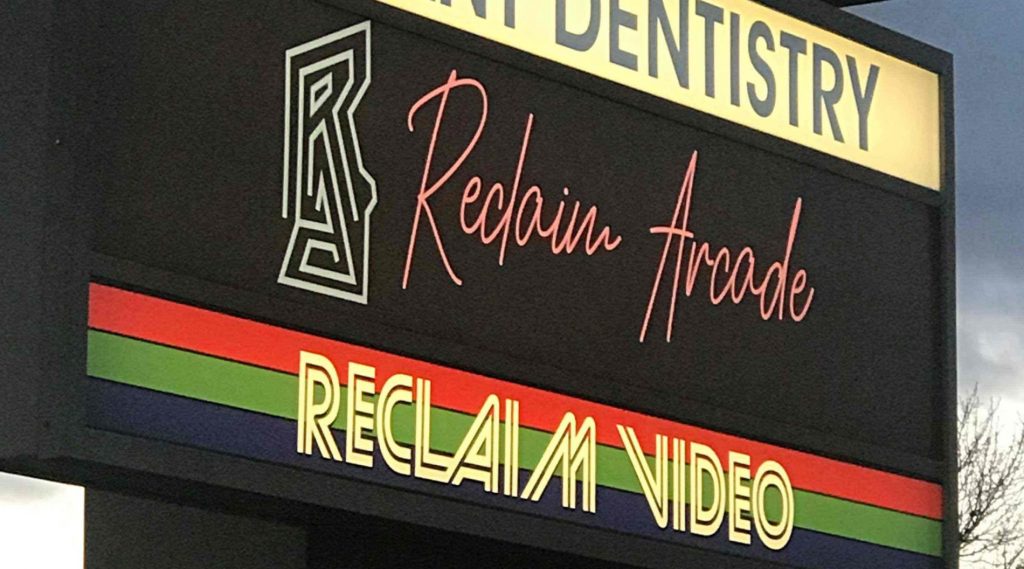 Reclaim Arcade Lighting it Up!

It will come as no surprise that Tim has been doing the heavy lifting for the arcade over the past two years, and that intensified even further this Fall as he took on the Herculean task of getting food and alcohol service up and running—which became a reality in late November. Amazing! At the same time, given the enormous time and energy required to run another full-blown company we made the decision for him to take full control of the Arcade and I remain wholly planted in Reclaim Hosting, so neither of us feels split. 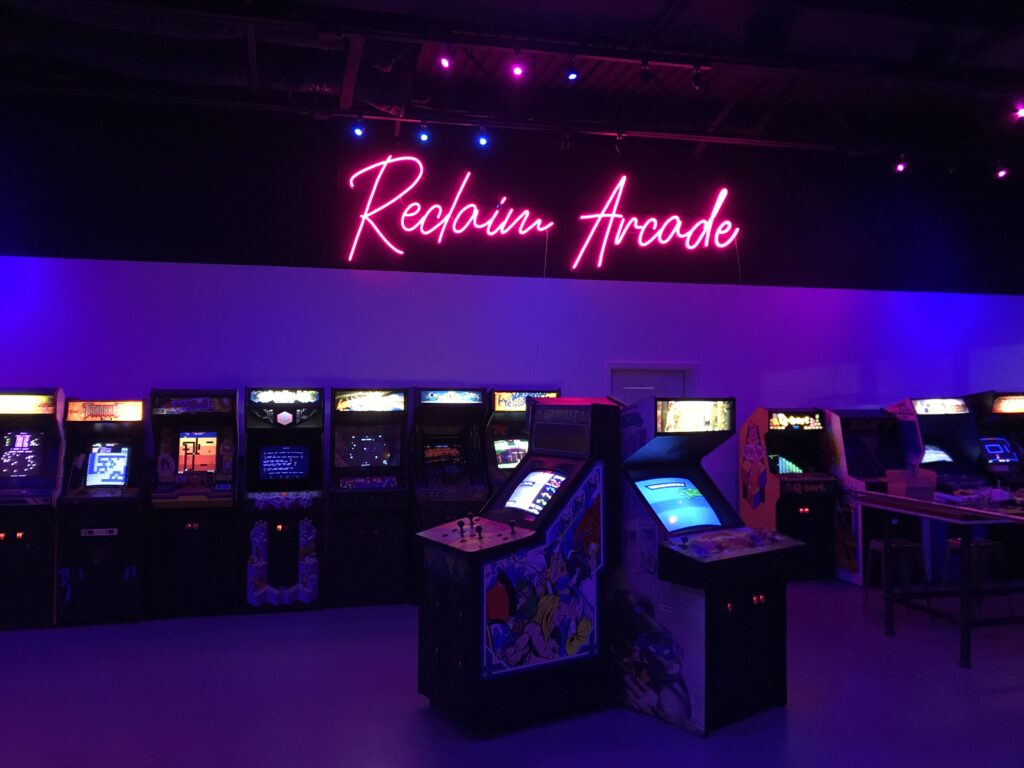 Stepping away from the arcade was not an easy decision for me, but being 4,000 miles away with no prospect of returning made it a necessity. Relinquishing my stake so Tim is not beholden to some ex-pat living the bella vita while he’s making the donuts was only right. 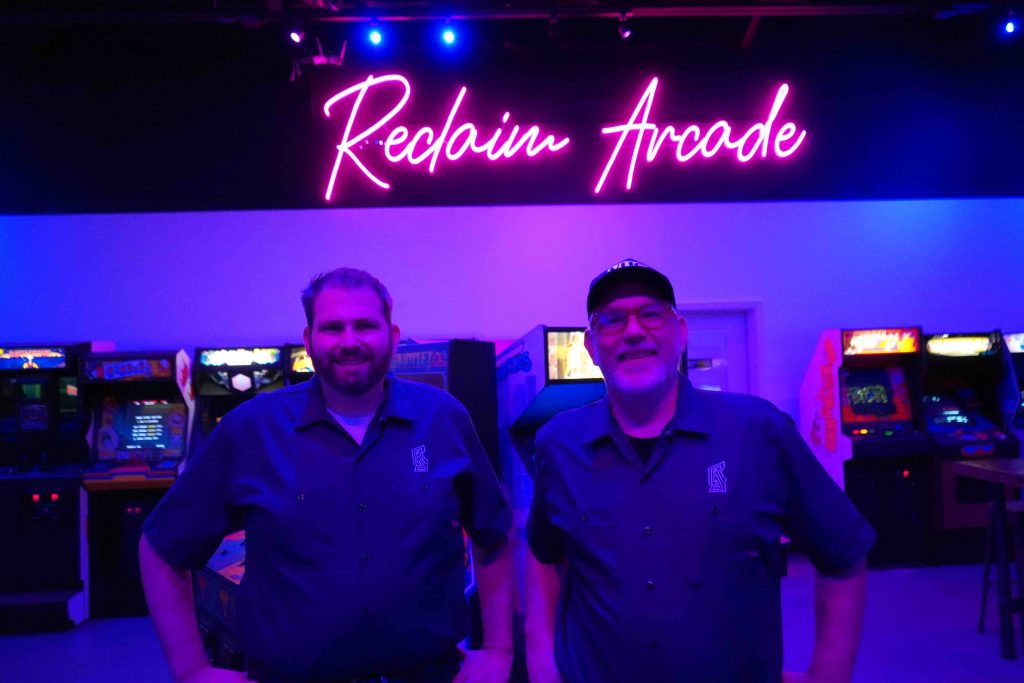 Tim and I have an unbelievable partnership that’s lasted more than a decade. It’s been the single greatest professional collaboration of my life, and he is an awesome friend to boot!  I hope everyone has the same good fortune as I have to work alongside a wunderkind like Timmmyboy—nothing but love! I also think knowing when to get out of the way will ensure the longevity of our work together, cause we’re far from done. Avanti Timmmmyboy …. avanti Reclaim Arcade!

I avoided doing any work this week on the Gyruss high score save and multi-game kit because I know it is going to be an involved project, and I wanted to spare my vacation from the dread that comes with soldering 🙂 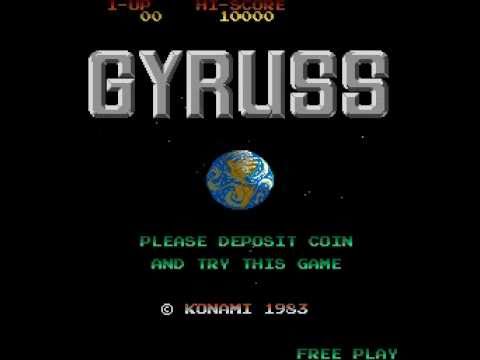 Gyruss needs to be modded still!

And I thought this post was already long 🙂 Not even sure where to begin here, but watching the bavaweekly video version will demonstrate my work on this during the week, but will capture some useful videos and resources I consulted, as well as a few tools below:

There are more, but these three gave me enough to get started with understanding how production/preview works, getting the Chroma Key going, and how I can imagine the different uses of the ATEM Mini versus OBS. 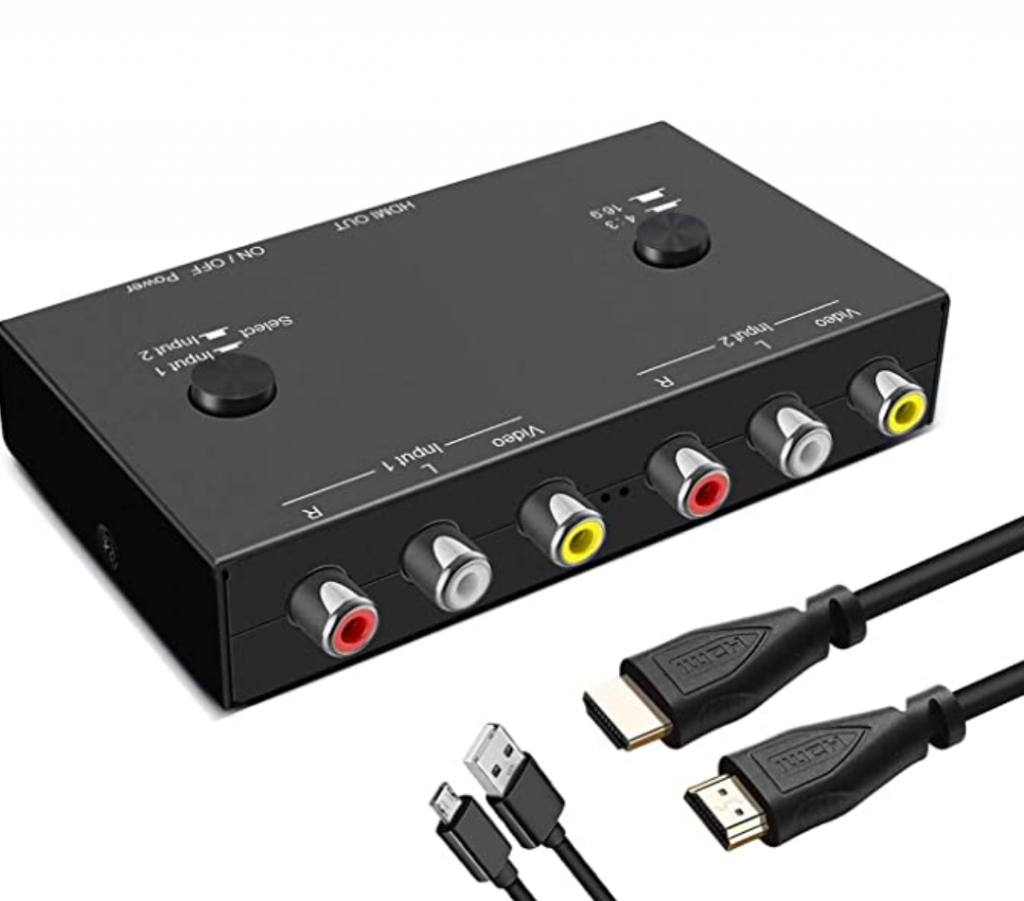 2x RCA switcher to HDMI Out 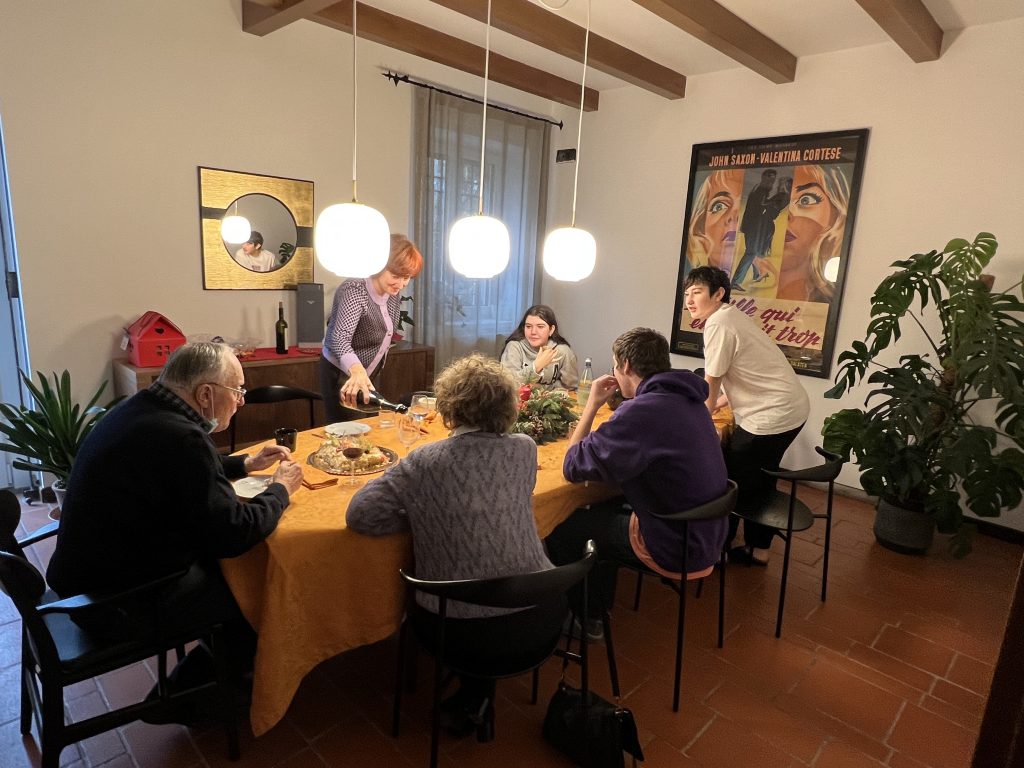