Civic TV: the One You Take to Bed with You 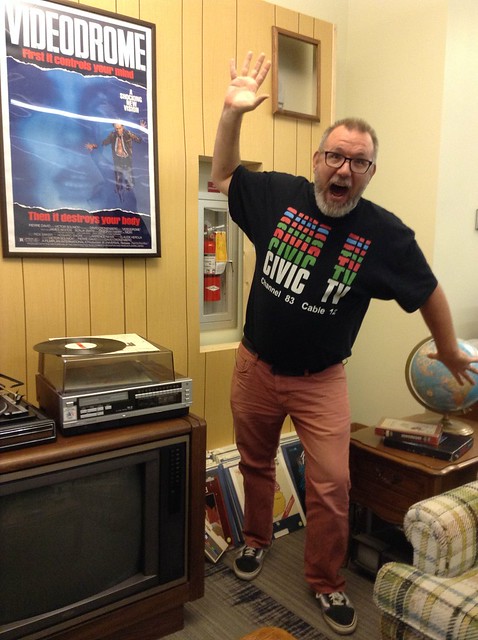 I did some shopping online last week and picked up some #umwconsole appropriate leisure wear. This stunning Civic TV t-shirt was made possible by the good folks at StrangeLoveTees. You may not get the reference, in fact I’d be surprised if you did—it’s quite oblique. Civic TV was the small, independent TV station in Toronto Max Renn (James Woods) operated in David Cronenberg’s Videodrome.

Grant Potter gave me the head’s up about the shirt a while ago. And with all the nostalgic dreaming around the 1980s, VHS tapes, Atari 2600, and re-creating independent TV stations that come out of #umwconsole, I could no longer resist.

Anyone remember the Atari 2600 in Videodrome? You can see it right above the great Brian O’blivion’s talking head in the following image .

One way to read Videodrome is through the lens of the impact of the corporate consolidation of media in the 1980s, and its impact on independent TV stations. Therein lies a critical history of independent media. I need to investigate the broader history of independent TV during this period further. But in the meantime, all I got was this crummy t-shirt!  Did I ever tell you this shirt is a symbol of my lack of individuality and my belief in the new flesh? Big fan!

2 Responses to Civic TV: the One You Take to Bed with You