Dreaming of an Open Source ReclaimTV

After my chat with Taylor about open source media ecosystems I was inspired return to the work we did around the TV metaphor for OERxDomains21 in terms of community programming. But rather than relaying on YouTube for both streaming and archiving the video I  am interested in exploring PeerTube as an open source substitute. 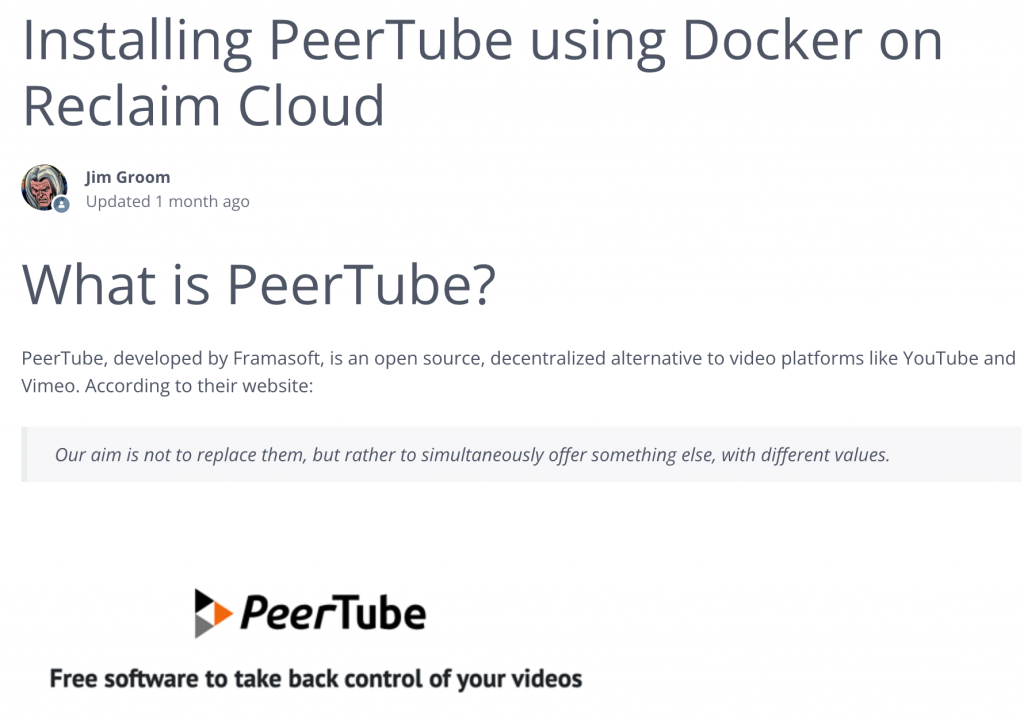 Documentation taking you through installing peerTube on Reclaim Cloud

I’ve already documented how to install PeerTube on Reclaim Cloud, so nothing new there. What may be of interest is that PeerTube allows you to import entire YouTube channels (along with all the videos’ metadata) using the PeerTube CLI tools. Reclaim Hosting currently has most of our various videos from OERxDomains21, 30 episodes of Reclaim Today, 28 Domains19 sessions, and sundry support guides on our Youtube channel. It’s well over 100 videos, and given previous experimenting with bava.tv I had a good idea how to go about importing them after installing Peertube at archive.reclaim.tv (the reclaim.tv domain is pretty awesome, no?).

I had to install the CLI Tools for PeerTube, which unfortunately is not as easy as it could be. It can be done from the existing PeerTube server, a separate server, or locally on your computer. Previously I used both my computer as well as a separate server, so I tried both of these avenues and eventually got them working, but the ins-and-outs demand a separate post, so stay tuned for that. Once you have the CLI tools working you can authenticate to your PeerTube instance and start bulk importing playlists from your channel with the following command:

This command will download and import the entire playlist along with all the videos’ metadata into your PeerTube instance. I prefer to set up a separate server for this rather than have it run off my laptop cause to import over a hundred videos (many of which run at least an hour) can take a couple of days. But, after a weekend of playing I had almost every video in Reclaim Hosting’s YouTube channel imported to archive.reclaim.tv with all metadata. Works beautifully as a backup if nothing else, but hopefully it is the beginning of a larger dream to have this content being pulled into an active, programmed community-based TV station, but we’ll see how that goes. 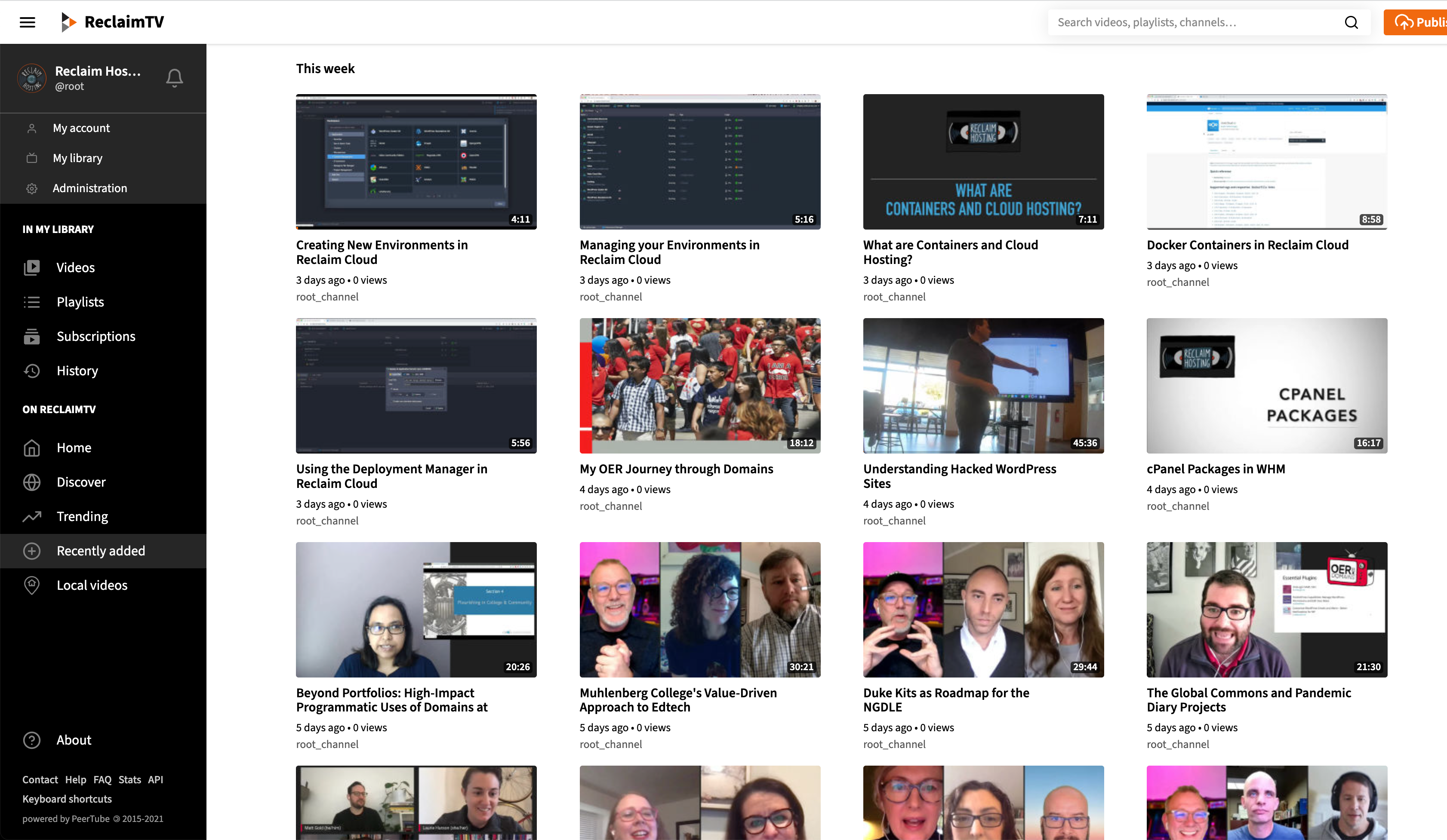 To achieve the dream of a more localized, independent “TV station” the next step will be figuring out PeerTube’s API, which will be a brave new world for me, but I’m looking forward to it. I believe that will allow me to implement Tom Woodward‘s headless WordPress instance then copy MBS’s code/thinking for building the OERxDomains21 program on top of PeerTube to see if we can’t start playing with a kind of homepage for Reclaim.tv. 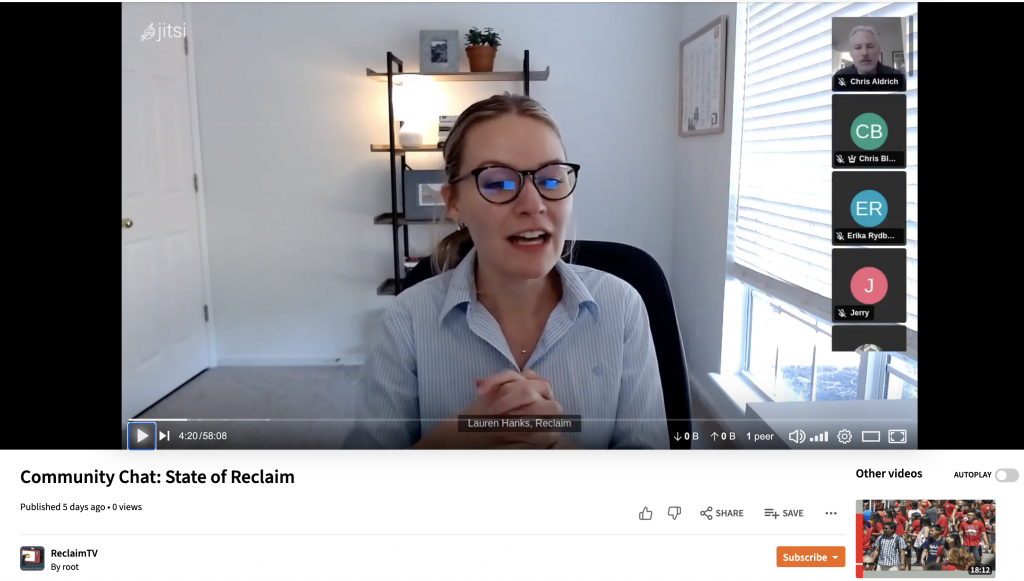 For the State of Reclaim community chat Taylor opted for Jitsi rather than Zoom, and the live recording is impressive

What’s more, I loved Taylor’s idea that while PeerTube can be both the archive and streaming platform, Jitsi can integrate into that ecosystem to provide a simple solution for a video conferencing scenario that anyone can manage. In fact, Taylor opted for Jitsi rather than Zoom to host and record the State of Reclaim community chat, and it worked quite well. So, programmatic integration of Jitsi with PeerTube that can be scheduled for live streams on the community TV station is the dream, and it provides a way of not only creatively linking this open source suite of tools, but also makes for a potentially interesting package in Reclaim Cloud wherein you can get up and running with your own TV broadcasting station of sorts. You know, the vertical and the horizontal! Also, did I mention we radio and Azuracast yet? 🙂

1 Response to Dreaming of an Open Source ReclaimTV