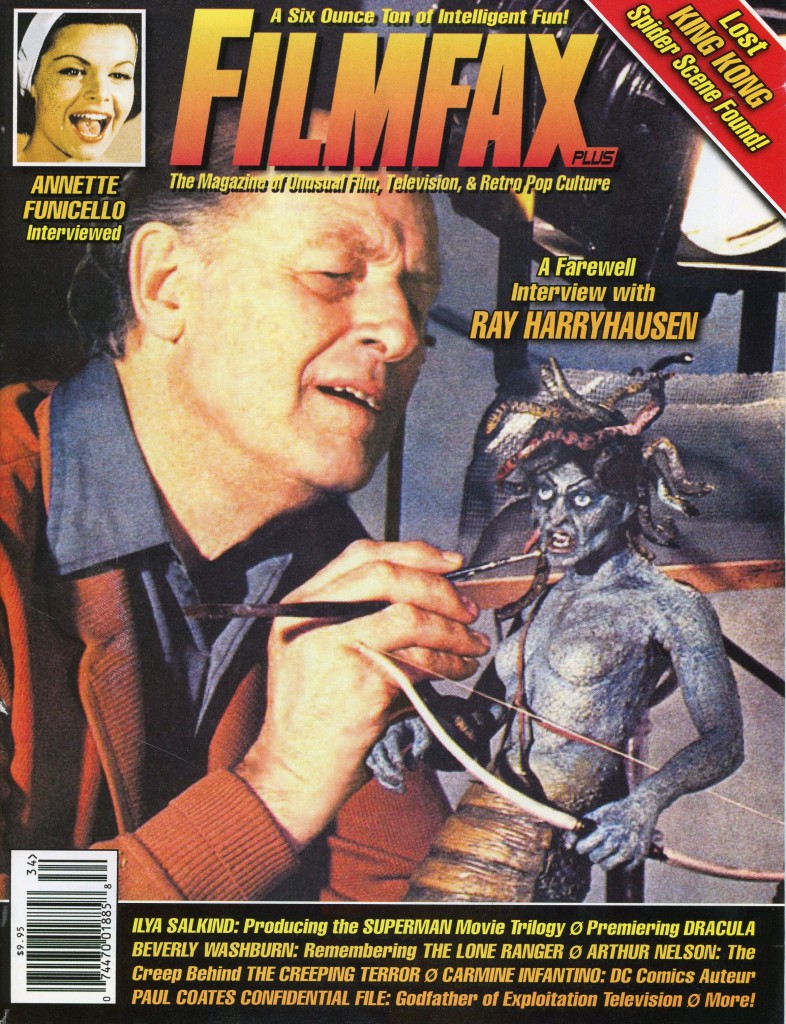 Just got the latest issue of Filmfax, and look what greeted me on the cover: the late, great Ray Harryhausen painting a miniature of Medusa from Clash of the Titans (1981). The article features an excellent interview by Mike Stein from 1999. The two of the coolest things about the article was how Harryhausen’s parents were his crew on his early, backyard animations, as well as how he got to meet Willis O’Brien, the animator for the King Kong (1933):

I met O’Bie [Willis O’Brien] through a friend when I was still in high school. I was in study hall and there was a girl with a book in her hand that had big illustrations and drawings of King Kong. I almost passed out, because that was my favorite thing. I went over and introduced myself, and she said that Willis O’Brien had given her the script, which was the script from King Kong illustrated with all these wonderful big drawings from Byron Crabbe and Willis O’Brien and other artists. I told her about my love of animation and King Kong and she said, “Why don’t you call him, he’s at MGM making War Eagles.” So, Idid and he kindly invited me over to the studio. At that time very few people were interested in animation. I must have been a novelty to him as much as he was to me.

I love this whole narrative of an unidentified girl ina high school study hall who changed the face of animation, special effects, and film more generally for generations of moviegoers, with this simple advice: “call him.” I’m glad he did, and it is also remarkable to me how so many of these genesis stories begin with an open hearted mentor and guide, apprenticeship #4life!

This entry was posted in film, movies and tagged Clash of the Titans, film, movies, Ray Harryhausen, Willis O'Brien. Bookmark the permalink.

1 Response to Filmfax ode to the legendary Ray Harryhausen