I’ve been dying to blog this, but I’ve been in beautiful Camden, NJ, piling up more work to do for Digital Whitman, a project which will shortly become the center of my life. But before that happens, I wanted to draw attention to work Martha Burtis has been doing with the P2 theme on UMW Blogs, which is both a Twitter knock-off for WordPress as well as a more traditional blog. She explains her process hacking this theme in detail here. 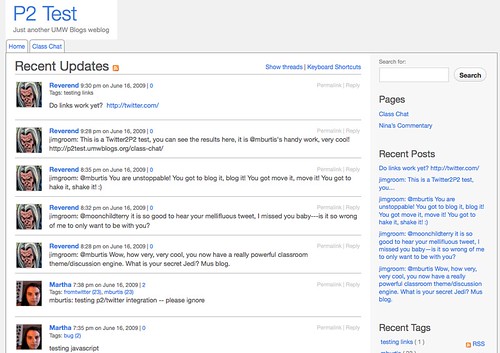 I find this really cool because it provides a really powerful way to marry the possibilities of both a blog and a twitteresque, free-flowing conversation all in one site. In addition, you can use the plugin FeedWordPress to aggregate tweets into the twitter-like conversation space so that students who might be on Twitter can contribute to the conversation from where they are. Now, I don’t mean to suggest that a vast majority of students at UMW are on Twitter, because I’m sure they are not just yet. However, this does provide us an interesting opportunity to frame some discussions about the Twitter model for communication which has literally proved revolutionary for communication on the web over the last six months. I have always had a difficult time broaching Twitter with faculty and students at UMW because it might at first glance seem too unwieldy, immediate, and irrelevant for the tasks at hand in a course. I think a P2/Twitter mashup might help change that perception, and if we can figure out how to filter and feed Tweets by hastags we would be golden—is that a job for Yahoo! Pipes?

What is so cool about a theme like P2 is that it allows UMW to adapt the form and function of a tool like Twitter to a course site on UMW Blogs quickly and with relative ease. And rather than resisting the ever changing landscape of the new web because our system sucks and is too expensive, we can once again quickly embrace and experiment within it. You gotta love these open source applications, especially when they have a community that just keeps on modeling their development on what’s going on around the web. Moreover, it usually takes but a fraction of the time it would take most other “learning” applications.