Update on 12/14/09: Unfortunately Cultra Rare is gone, for nothing gold can last. 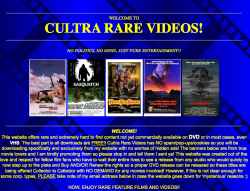 I have been exploring the Cultra Rare site I found by way of this post by Kliph Nesteroff over at WFMU’s Beware of the Blog (I’m finding Kliph to be a veritable goldmine of resources). What I love about Cultra Rare is how much it makes me feel like I’m eleven years old browsing the shelves of our local mom and pop video store circa 1982. The look and feel of the site adds to this bit of nostalgia given the old school web design and no-nonsense approach, the tag line says it all: “NO POLITICS, NO NEWS, JUST PURE ENTERTAINMENT!!” 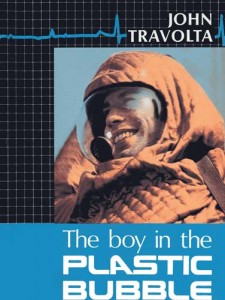 The site offers downloads to a wild collection of hard to find films from the 1960s, 1970s, 1980s, and early 1990s, that haven’t been commercially released on DVD. It’s kind of a b-movie lover’s dream archive, filled with everything from the Dean Martin’s last film (which is still banned from video distribution in the US–anyone know why?) Mr. Ricco (1975) to The Boy in the Plastic Bubble (1976) to Sasquatch (1977) to American Hot Wax (1978) to Treasure of the Four Crowns (1983) and a ton in between. I’m excited by the possibilities here, but just like in the video stores of yore, browsing the titles and the crazy poster/cover art is a large part of the titillation of the movie watching experience.

Another bonus is the file that includes an insane number of trailers from a host of crazy movies. Until last night, I have never watched two hours worth of horror movie trailers in one sitting, and I have to say that the experience is pretty wild. It’s in some ways more enjoyable than sitting though any one of these films for the same time period, which may have something to do with the way I’m consuming video online these days. Nonetheless, watching so many trailers in one sitting impressed me with just how many ways you can approach a trailer.

Take, for example, Hitchcock’s trailer for Psycho (1960), wherein he tours the scene of the crime for six minutes (all the while to an oddly upbeat music score) obliquely narrating the details of the grisly murders, until he nails the lulled audience at the end with the shower murder scene. Brilliant stuff.

And the unreleased trailer for William Friedkin’s The Exorist (1973) is like surrealist experiment in expressionism, a truly haunting and impressive trailer that seems to bun the possessed image of Linda Blair on your psyche.

Or another masterpiece is Kubrick’s original trailer for The Shining (1980), which is brilliant in its austere approach to introducing the film.

And then, in stark contrast to Kubrick’s subtlety, you have the in-your-face, sensational narration for The Corpse Grinder (1972) trailer, which is a lot fun in it’s innovative use of editing the machinations of this diabolical machine, creating some very mild gore.

And then there are the unrated trailers that seem to push the limits for certain audiences, for example the Italian horror film Mangiati vivi! (1980) (or Eaten Alive!) lays on the gore.

Here is the trailer where the narrator talks about this:

And here are the screen shots from an alternative trailer where the message is both read and written on inter-titles: 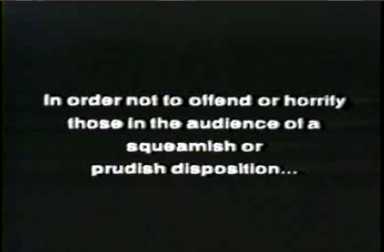 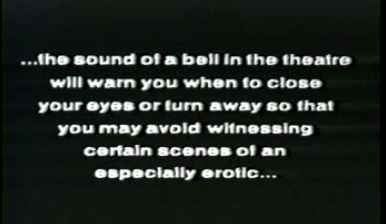 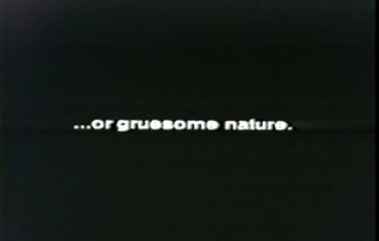 Or the warning at the end of the trailer for Lucio Fulci’s classic Zombie, which adds this special note:

In the interest of public health, the management of this theater will upon request of any patron buying a ticket provide patron with a “barf bag” similar to those used for airline sickness.
Thanks You. 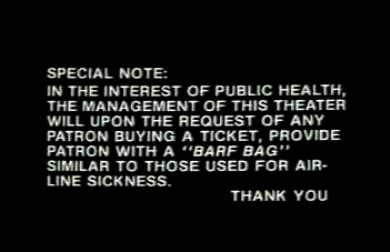 And here’s the actual trailer, which makes me wish I was playing Left 4 Dead right now:

And then there is even more overt trailes for the Italian soft-porn horror genre. Take, for example, Alfredo Rizzo’s 1975 film the The Bloodsucker Leads the Dance, which I’ll let you find on YouTube on your own, with a little help, if you are so inclined 🙂

All this to say, there is much to be learned from movie trailers, and while my bag is the horror/gore trailer, I think this form has much to teach us in a moment when two to three minutes of video is about all we make time to watch. How much can you say in such a short period of time? I think a course of movie trailers and posters has never been more relevant.