I picked up Truman Capote’s In Cold Blood for the first time this weekend. I am only a hundred pages in thus far, but I can only begin to suggest how artfully he frames the narrative in the first fifty pages. I have yet to see the film starring Robert Blake, and I am kind of glad I held out because after finishing the book I would be very interested to see how they translated this narrative. The book seems almost written for the screen, the way in which it cuts between the narratives of the Clutter family and the murderers harrowing movement towards what is written as if it were the violent destiny for everyone involved in this macabre documentary tale. It is really masterful how the juxtaposition of the family’s daily routine with a more detailed portrait of violence personified by these two murderers creates a tension and compassion that is as masterful a narrative splicing as I have yet to read.

I also was struck by a few of the symbolic harbingers of things to come. One, in particular, struck me more than the other in the first fifty pages of the book -the description of Mr. Clutter admonishing his son Kenyon not to ride his horse too hard:

“Skeeter was a horse.” A beautiful horse. A strawberry stallion he [Kenyon] had raised from a foal. How that Skeeter could take a fence! “You use a horse too hard,” his father had cautioned him, “One day you’ll ride the life out of Skeeter.” And he had; while Skeeter was streaking down a road with his master astride him, his heart failed, and he stumbled and was dead.

A vivid moment that captures the immediacy of death, and how quickly it can all be turned off. A theme Capote elaborately weaves throughout the first one hundred pages so brilliantly. Yet, I had only ever seen horses as majestic, powerful beasts who move so swiftly and gracefully, and yet are somehow rooted to the earth. Being a city boy, I have never seen a dead horse, and have to admit that I didn’t really have the imaginative power to represent what it might look like. But then, as if by some metaphysical convergence, I came across the following image in FoToEdge’s Flickrstream, whose photographs constantly inspire so much emotion and thought for me, but this one was one in particular was just downright unheimlich. 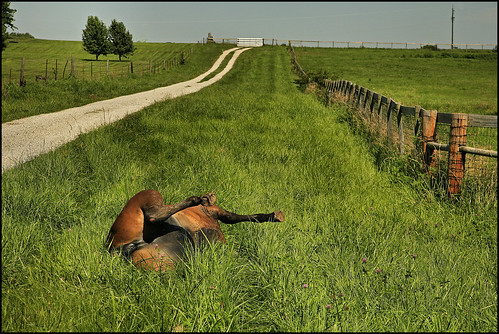 And the two separate works of art all became that much more beautifully horrific for me.

3 Responses to In Cold Blood