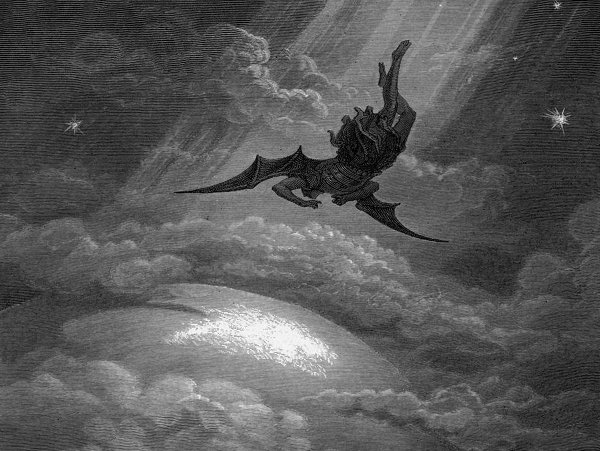 Yet from those flames
No light, but rather darkness visible.

I’ve been writing a bit about early internet and web history based on the Internet Course I am embroiled in currently. Some of the early deomgraphics of the web are really interesting to me, and I imagine are somewhat surprising to the students. 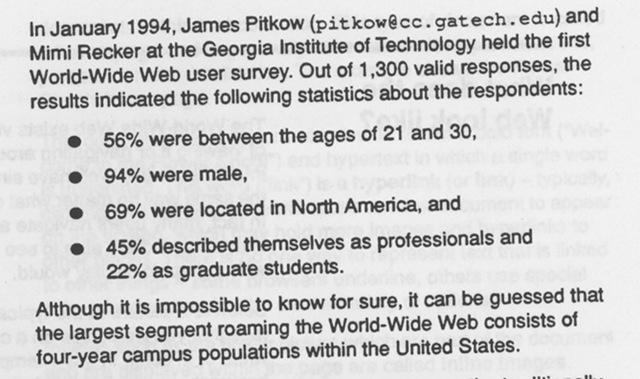 The early web was a relatively young, male-dominated, and North American phenomemon. Additionally, according to Hughes, the survey suggests the “largest segment roaming the World-Wide Web consists of four-year campus populations within the United States.” The early web was composed of people just like Alan Levine, even back then 🙂 More seriosuly, four-year campuses were the epicenter of early web culture which is a powerful and compelling narrative of higher ed as a laboratory for the future—even if it’s humble beginning were demographically skewed.

In his guide, Hughes also provides a breakdown of who surfs the web based on “an informal comparison of host statistics from 15 government, educational, and corproate Web sites in March 1994.” 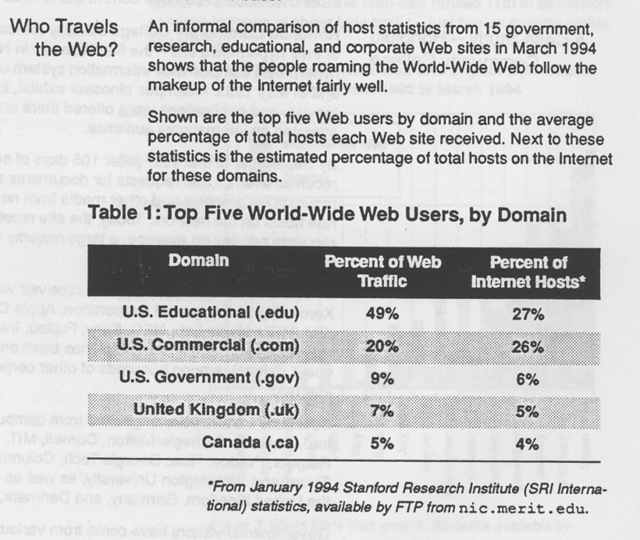 Once again, a vast majority of the web traffic, and the largest percentage of “internet hosts” (computers connected to the network) were located at educational institutions. It may be hard for those who didn’t live through this history to imagine it, but at a moment in time universities were actually relevant when it came to the web. Hell, they weren’t only relevant, they built out the entire internet infrastructure it emerged from.

Oh, how far we have fallen! Just two decades later the LMS, not the web, has become where universities do most of their web-related work with students. University websites are little more than glorified admissions brochures. In a depressing twist of fate, higher ed has outsourced the most astounding innovation in communications history that was born on its campuses. Through a process that started in earnest during the late 1990s—roughly at the same time the dot.com market boom—universities moved to a  market-driven corproate IT logic. Digital communications were understood as services, and the open web got lumped with email, intranets, and the LMS as a business application. Somewhere during this time the internet was confused with efficiency and the web was mistaken for an interactive fact sheet.

That reality has pretty much continued unabated since. Web 2.0 was often integrated into the campus brand, but broad, culture-shifting experimentation along these lines can be counted on one hand. IT organizations have dictated what’s possible, often defaulting to closed and “no” when it comes to anything but enterprise. Ironically, they’ve been more than happy to outsource their own bread and butter (email, document storage, web space, the LMS, etc.)  in hopes of the cloud making their own work redundant. Where is the innovation happening right now when it comes to IT in higher ed? This is an honest question because I can’t see it.

Back to history, as the internet transitioned from a NSF-sponsored backbone to a commercial-friendly environment in the late-1980s and early 90s, the ground was prepared  for the web to become an increasingly corporate dominated venture. In some ways this all made sense, the popularity of the world wide web and the resulting demographic explosion from the mid-90s through the early 00s—thanks to relatively cheap and easy access— brought millions and millions of households online.

What doesn’t make sense is how the education sector essentially denatured itself from the innovation it had cultivated for almost three decades. It’s hard to believe, given where we are now, that universities were behind a majority of the major networking protocols established from the early 1970s through the early 90s (such as Telnet, FTP, TCP/IP,  Gopher, etc.), as well as a majority of the early social networks such as Bitnet and Usenet.

The invasion of a corporate mindset of IT has had its deep effects on higher ed’s inability to innovate for the last fifteen years. We stopped at BlackBoard, and everything else we refer to as innovation is a service we have bought from the corporate sector: Google Apps, Microsoft Live, Apple everything, Abobe anything, BlackBoard, Facebook, YouTube, and on and on and on. And when students do try and innovate despite the university’s risk-averse infrastructure, they’re shutdown quicker than a strip bar in Times Square 😉

Universities are the last place you’d look for innovation in education, even though it’s still happening there. Take, for example, the Massive Open Online Course (MOOCs) which over the last two or three years has become the posterchild of innovation in highered. This approach was started by two Canadians, George Siemens and Stephen Downes, at the University of Manitoba in 2008. A professor and government researcher, Siemens and Downes decided to put into practice the educational theories and philosophies of connectivism and connected learning they’d been writing about and experimenting with for years. Their early MOOC provided a brilliant example of praxis. What’s more it’s telling it took a collaborative effort between a university professor and a government researcher (much like the beginnings of the internet) to demonstrate the deep, powerful implications for universities more generally. [When the specifications for the internet were distributed as a bid for building this network in 1969, most corporations laughed at the idea proclaiming it as impossible—a reality that lasted for almost decade.]

MOOCs, as Siemens and Downes imagined them, are one of the few sources of true innovation you can point to in educational technology in recent history, and it was born from a higher ed/government relationship. Yet, within a couple of years the MOOC movement had become increasingly denatured and over-run by corporate boosterism that was redirecting the logic of experimentation and possibility to a rhetoric of how broken higher education is, and how Silicon Valley (poaching superstar faculty from Stanford with the allure of millions of dollars) has come to its rescue. What was remarkable to me as I watched the MOOC experiment transform into a corproate takeover was how quickly and completely the alien pods took over the experimentation before it could breath. before it could even develop it was already a fully formed disruptive solution to a moribund instituion. Innovation lost.

As a case study, MOOCs provide an excellent example of how quickly innovation happening at universities is co-opted and re-branded by venture capital-funded startups. The craziest part of it all is that University adminsitrators and IT professionals have no idea where the innovation started. It’s akin to Mike Caulfield’s recent documentation of the amnesia universities suffer when it comes to their own history with online learning. Elite universities all over the world have been buying back the innovation from Coursera that their very ideals and missions were established to make possible with the mindset of, “hey, it might get big, let’s get in on the bottom floor.” It was as if edtech shops and central IT at all these universities were approaching MOOCs (as fashioned by Coursera and their ilk) as if it were a Google IPO, “who knows, it could break big.”  Or it could break bad, and they’ll look like a bunch of jackasses for not doing the job educational institutions were meant to: bring in smart people to experiment with what’s possible. Stop outsourcing innovation, it has gotten us no where in the end.

I would say more, and I will shortly, but I think I’ll stop here. This post is very much inspired by Brian Lamb and the brilliant work he is doing right now on this topic. We’re co-authoring an article and they only way I can write any more is to sitdown and blog my ideas first. Some parts of this post may re-emerge later in a more digested article, or they may not given how bad they will seem to me (and Brian) tomorrow 😉

This entry was posted in Instructional Technology, The Internet Course and tagged edtech, innovation, instructional technology, IT, MOOCs, tic104. Bookmark the permalink.