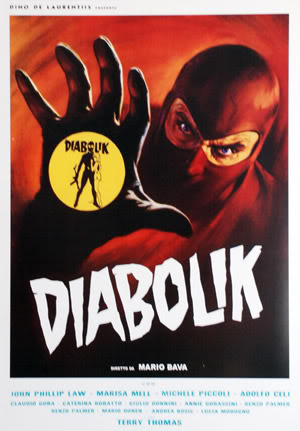 After an unbounded discussion with Bryan Alexander a week ago over dinner in Washington DC, I was reminded of one of Mario Bava’s most acclaimed movies I had yet to see: Danger: Diabolik. And after finally watching it last night, I understand why it has recently become the most popular of Bava’s films. It’s right up there with Black Sunday and Planet of the Vampires when it comes to brilliant camera work, stunningly cheap special effects, far-out costumes and beautfiul set designs (all of which are the keys to a great Bava film). And there may be one other thing it has over these other two films: possibly Ennio Morricone’s wildest soundtrack. Morricone has at least four unforgettable gems in this film: Under Wah-Wah, Deep, Deep Down, Money Orgy, and Driving Decoys (the last of which now rivals my other favorite Morricone song from Pasolini’s Uccellacci e uccellini available at the bottom of this post).

One of the most pleasant surprises of the DVD was actually the short documentary about the film titled Danger: Diabolik: From Fumetti to Film, which featured brief interviews with Ennio Morricone, the great Dino DeLaurentis, and MCA of the Beastie Boys—who happened to be annoyingly inarticulate. The majority of the documentary’s commentary was framed by comics artist and publisher Stephen R. Bissette, who was absolutely awesome to listen to. His discussion of Bava’s aesthetic is one of the best I have heard, he perfectly defines the power of Bava’s film making as primarily sensual, which is driven by an aesthetic and ambient experience rather than a complex narrative or character driven logic. The only thing better than that was his discussion of the comic Diabolik as a moment in pop culture history, which provides a wonderfully contextualized discussion of the cultural history of comics in post-WW II Europe. Bissette offers a fascinating explanation of why the tradition of super criminals (or anti-heroes) took hold in Europe, as opposed to the US tradition of super heroes. If you have two-minutes to spare, I highly recommend you listen to him contextualize the cultural history of comics in post-WW II popular culture, it’s this kind of intelligent discussion and the ability to relate what might appear to many a cheesy b-movie to a broader shift in thinking as a result of historical events like WW II and the counter-culture movement of the 60s that makes me fall in love with film and film criticism again and again. It just seems like he is having so much fun make these connections, and framing his interpretation–not to mention he’s quite smart.