Marshall McLuhan is a Tripper 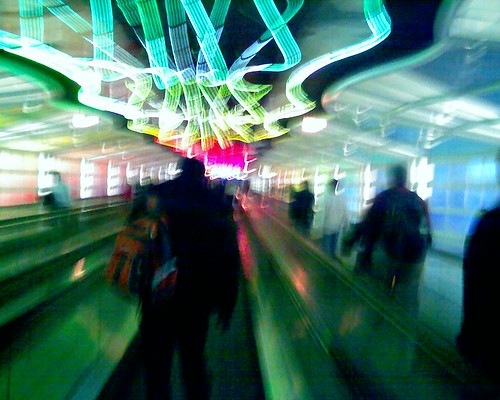 “As technology advances, it reverses the characteristics of every situation again and again. The age of automation is going to be the age of “do it yourself.” Marshall McLuhan, from the Essential McLuhan.  Edited by Eric McLuhan & Frank Zingrone. Routledge 1997. Page 283.

I started my morning off with an IM Chat with Mikhail Gershovich who sent me the quote above which seems unbelievably timely, as if it were written in the recent wake of the EDUPUNK apocalypse. In fact, Gardner Campbell, whose recent post on blogging and method is a must read for anyone using blogs in education, has been talking about the necessity for re-visiting McLuhan since teaching his Intro to New Media Studies class. I’ve meant to do this, but as time would have it, I opted for re-watching classics like The Road Warrior and C.H.U.D. to further the debate. Yet the quote above inspired me to re-visit a video I found a couple of months back on the Media Funhouse blog (a wonderfully eclectic media blog) which linked to a debate between Marshall McLuhan and Norman Mailer on the CBC television show “The Summer Way” back in 1968.

Well, I can’t thank Mikhail enough for the push to re-visit this video, because the conversation between these two thinkers is unbelievably timely. Moreover, it seals the fact that I have to start reading McLuhan en masse sooner rather than later—he is absolutely wonderful in this discussion. I won’t ruin the clip for you, but below I have transcribed a few morsels that I will be feeding off for a while.

For example, their first exchange is absolutely mind bending:

Mailer: “Look Marshall, we’re both agreed that man is accelerating at an extraordinary rate…into a super technological world, if you will. And the modes and methods through which men instruct themselves and are instructed are shifting in extraordinary ways…”

Mailer: “Well, but at the same time there’s something profoundly auto-erotic about this process and it’s sinister for that reason…”

McLuhan: “It’s psychedelic…when you step up the environment to those speeds, you create the psychedelic thrill. The whole world becomes kaleidoscopic, and you go inward, by the way, it’s an inner trip not an outer trip.”
________
Or this gem…

McLuhan: “Whenever a new environment goes around an old one there is always terror. We live in a time when we have put a man-made satellite environment around the planet. The planet is no longer nature, it is no longer the natural world, it’s now the content of an artwork. Nature has ceased to exist…the environment is not visible, it’s electronic.
______
Or this…

McLuhan: “Every age creates as an Utopian image a nostalgic rear-view mirror image of itself, which puts it thoroughly out of touch with the present. The present is the enemy. The present is the—and this will delight you Norman—the present is only faced in any generation by the artist. The artist is prepared to study the present as his material because it is the area of challenge to the whole sensory life, and therefore it is anti-Utopian, it is a world of anti-values. And the artist who comes into contact with the present produces an avant-garde image that is terrifying to his contemporaries.”
______
And this…

McLuhan: “An electronic world re-tribalizes man”
______
Also this, especially if you can look beyond the insistence of the male pronoun…

McLuhan: “The contemporary artist is always seeking new patterns, new pattern recognition, which is his task, for heaven’s sake. The absolute indispensability of the artist is that he alone in the encounter with the present can get the pattern recognition. He alone has the century awareness to tell us what the world is made of. He’s more important than the scientist, than scientists will be waking up to this shortly and will be resorting en masse to the artist’s studio in order to discover the forms of the material they are dealing with…the scientist lives in a world of matching, and his idea of proof or verification is just the idea of matching evidence against evidence. When somebody doesn’t match but makes a new breakthrough, this is just as disturbing to the scientist as to the educator.”
______

So with that, I leave you with the video, which is a wonderful way to spend a half-an-hour of your day, I promise. And it re-confirms for me just how relevant McLuhan can be for my thinking about educational technology, as well as what a metaphorical tripper he once was and still is.

If you have a problem with the embedded video, view the original here.

9 Responses to Marshall McLuhan is a Tripper