I’m not sure I wrote about it here yet, but back in October I picked up another arcade cabinet here in Italy, namely Millipede (1982). It was a bit ironic because I was not necessarily a fan of this game. I remember telling Tim that it ‘s one that I would sell from Reclaim Arcade, but those were famous last words I guess. It could also have something to do with the fact that the Centipede cabinet that essentially started the arcade frenzy for Tim and I overshadowed Millipede in my mind. That Centipede cabinet is arguably the most pristine in Reclaim Arcade and being the first gives it a special place in my heart, so maybe my tepid reception of Millipede in Reclaim Arcade was a result of all these factors …. I just don’t know, I’m a technologist not a psychiatrist!

Anyway, I got a Millipede and I have a new found love for the game. What’s more, while I was digging around for high score save kits for some other games I found a mod for the Millipede game board that allows you to play several other games on that cabinet: namely Centipede, Warlords, and Super Breakout.  Some 4-in-1 Cabinet fun! So, trying to bounce back from the utter failure of trying to install the Phoenix mod kit this weekend, I got back on the arcade hobby horse. 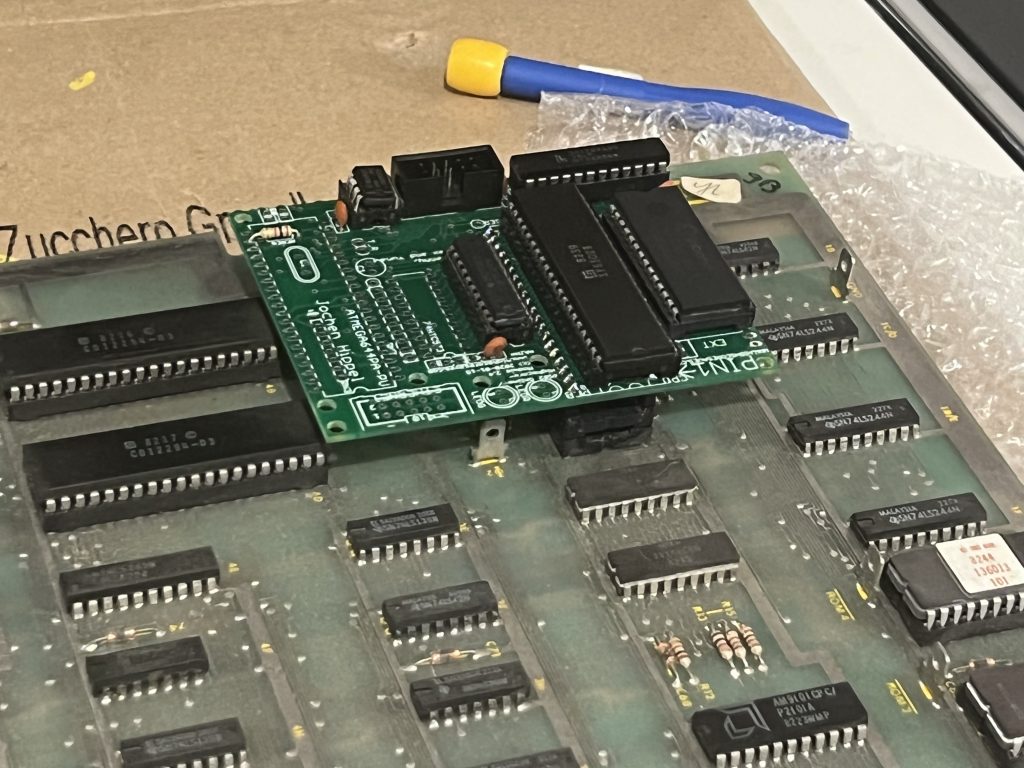 CPU Daughter Board for Multipede 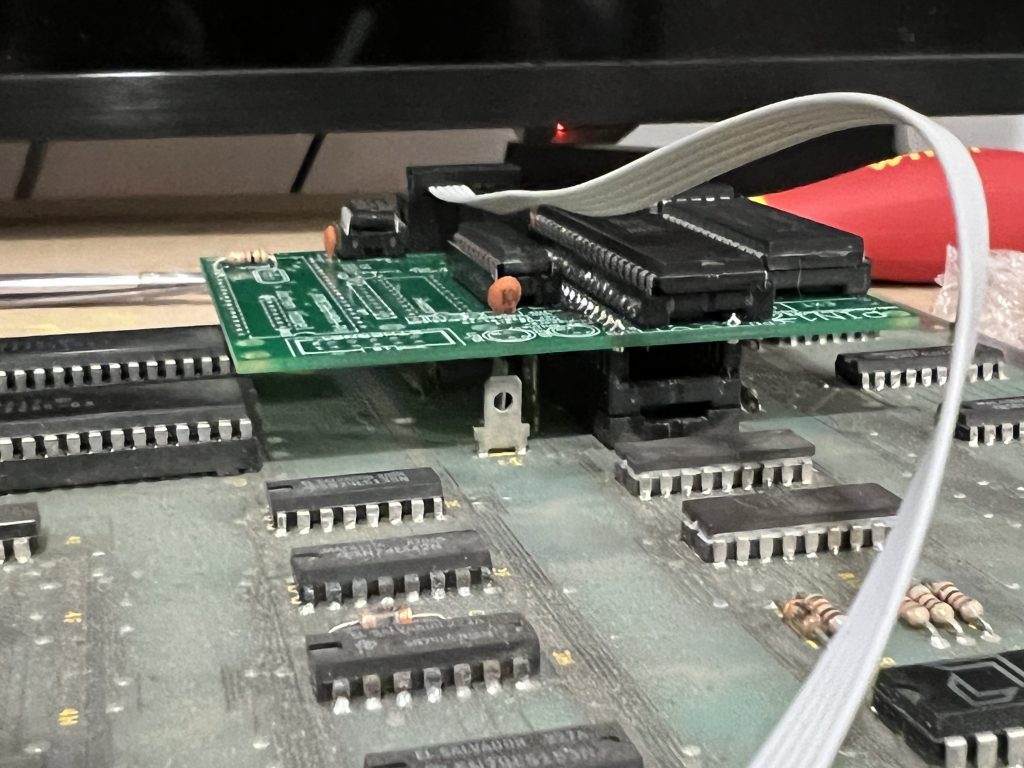 Millipede CPU Daughter Board with riser

I am happy to report that the CPU on the Millipede game board was socketed, so I just had to gently remove the 40-pin chip and add the above daughter card to the that socket. The CPU is placed in the provided space on the daughter card, and I used a riser (a second socket) to make sure the card would clear the metal test points on the board. It was quite simple, the next step was to remove two rom chips and add the second daughter card with the additional ROMs for Centipede, Warlords, and Super Breakout. 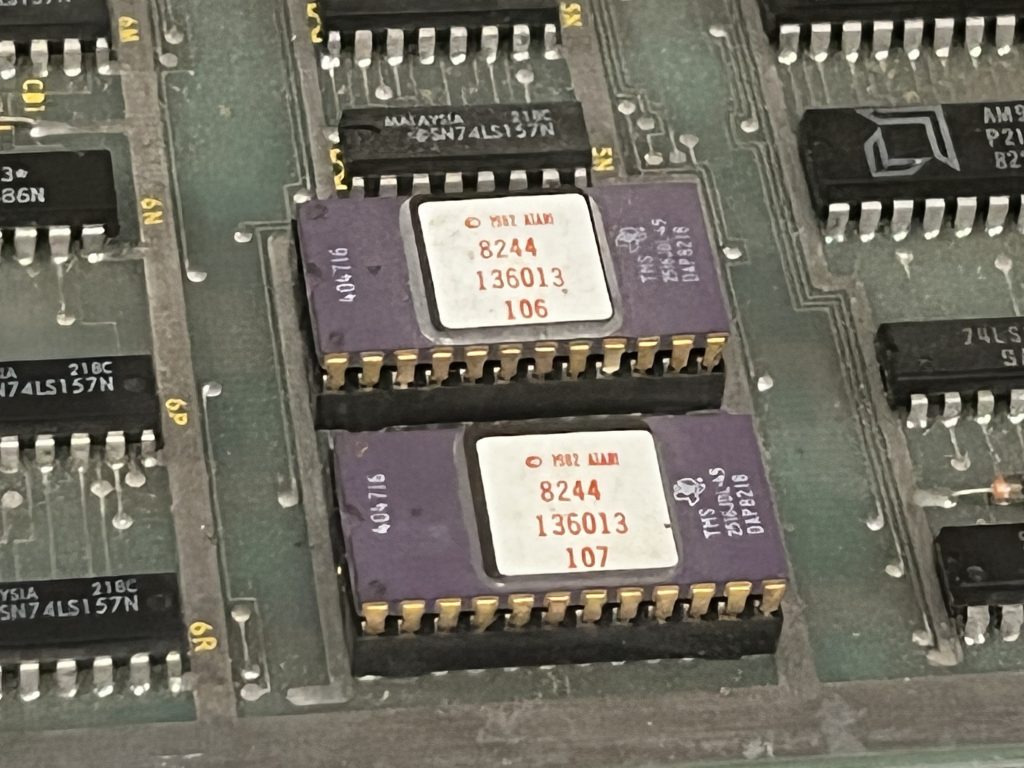 Millipede ROM chips to be removed 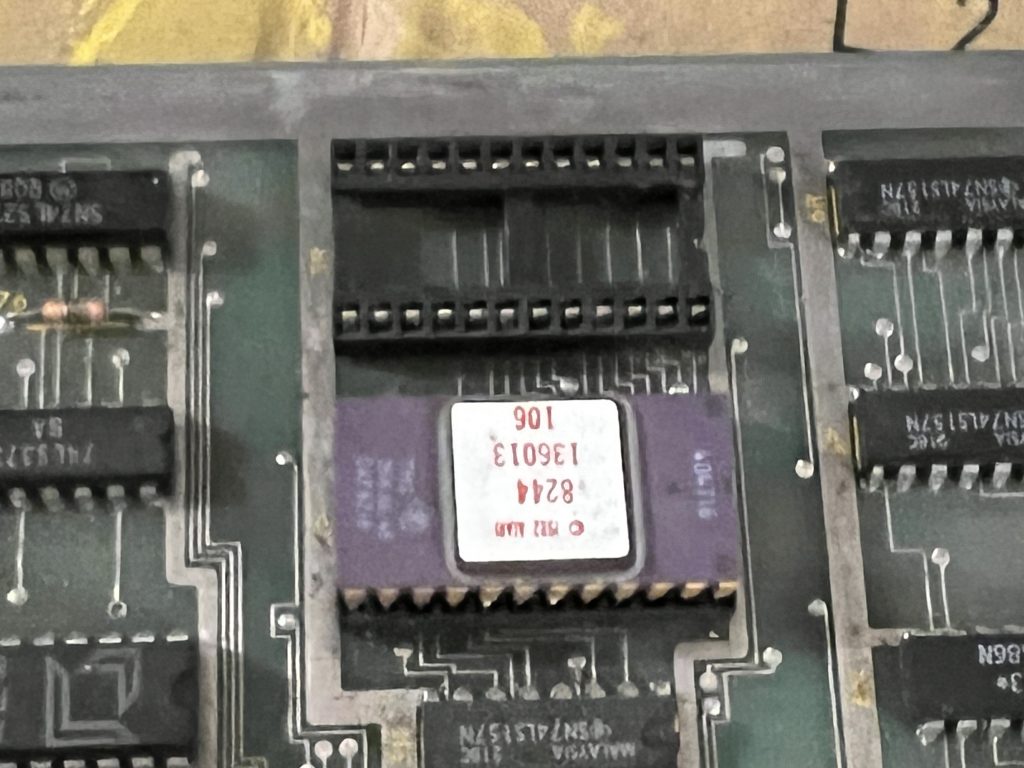 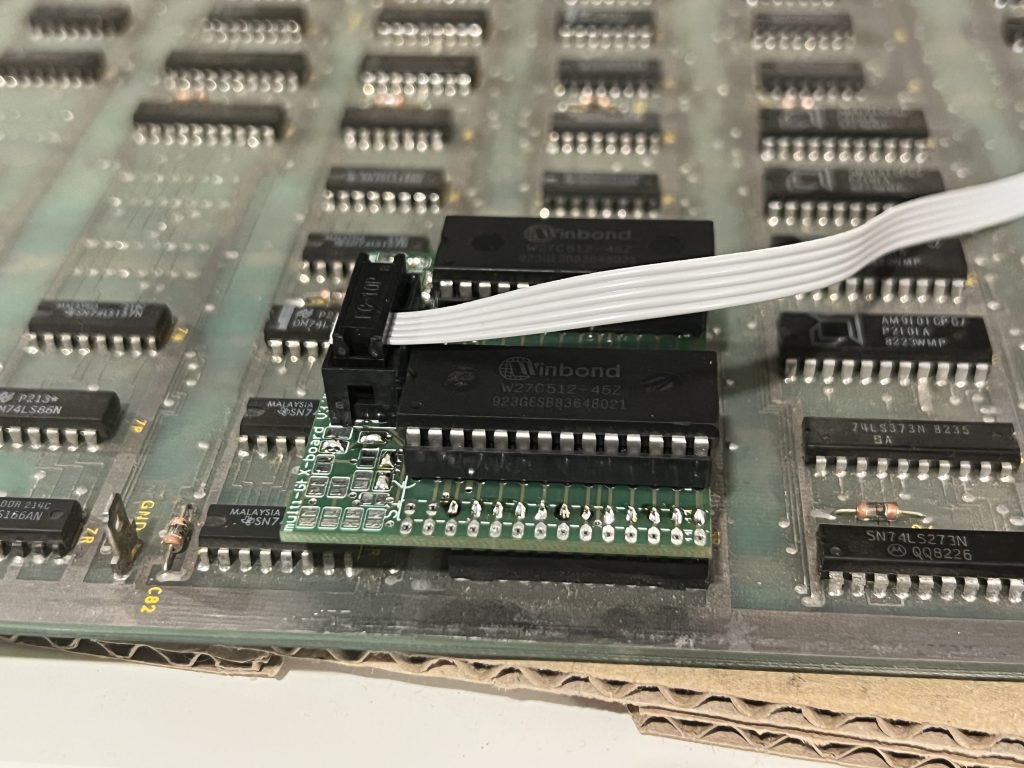 And removing the 24-pin ROM chips was even easier than the 40-pin CPU chip, and I placed the second daughter board and the final piece was attaching the connector ribbon so the boards could talk to one another: 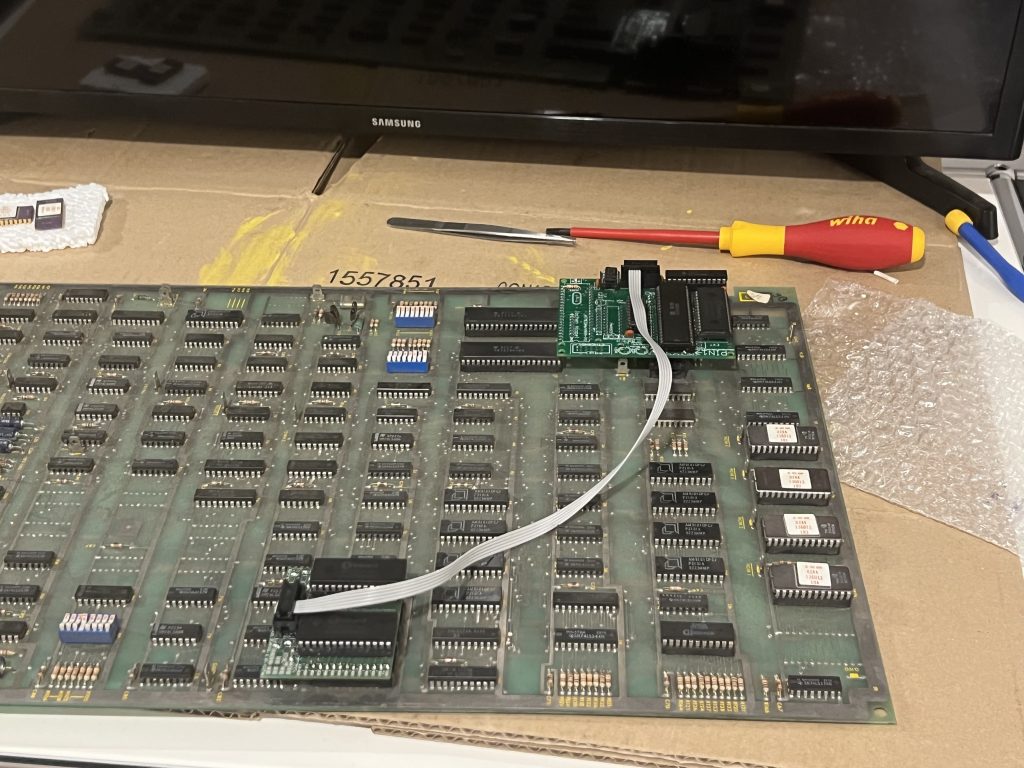 I am going fairly light on details here cause the following two videos cover the installation and setup of the Multipede game board way better than I could:

As the videos outline, once you have the board installed you press down the player 1 button when the game is turned on to access the broader settings for the cabinet, each of the games, etc. The beauty of these mod kits is they can make what was a laborious activity of changing settings by pulling out the game, opening the back, removing the game board and changing dip switch settings a seamless process at power up: 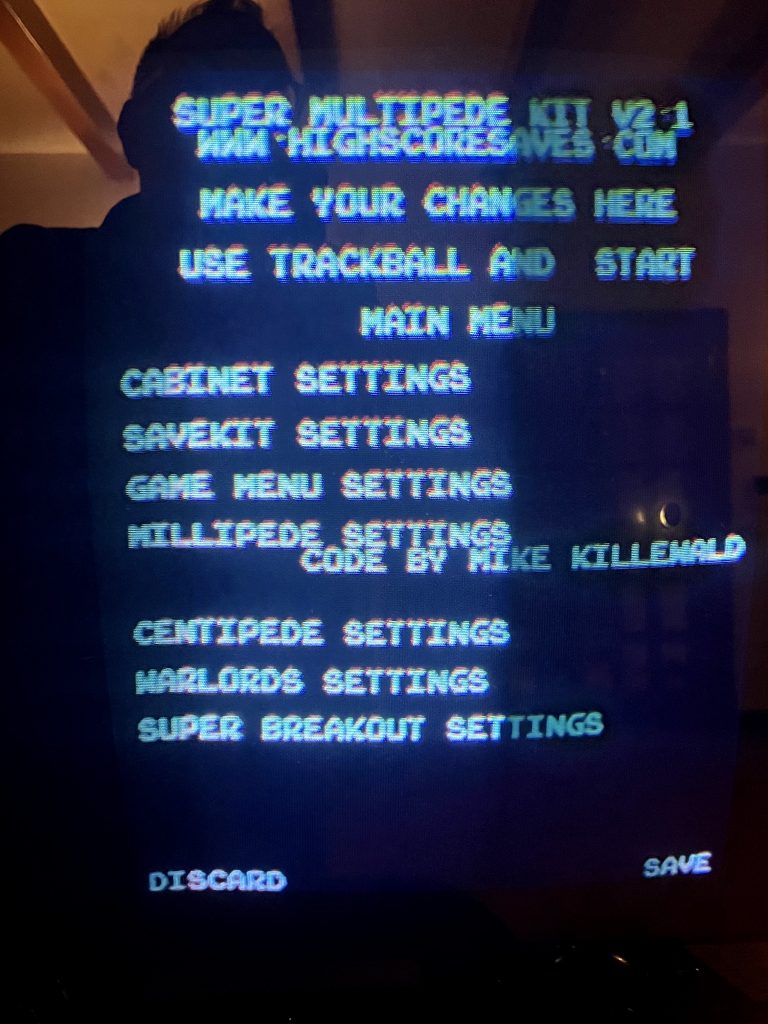 Once you have things set as you like them you can save your settings and you will be pushed out to the game. At any point after that you can select which game you want to play by once again pressing down the player 1 button for 4 seconds: 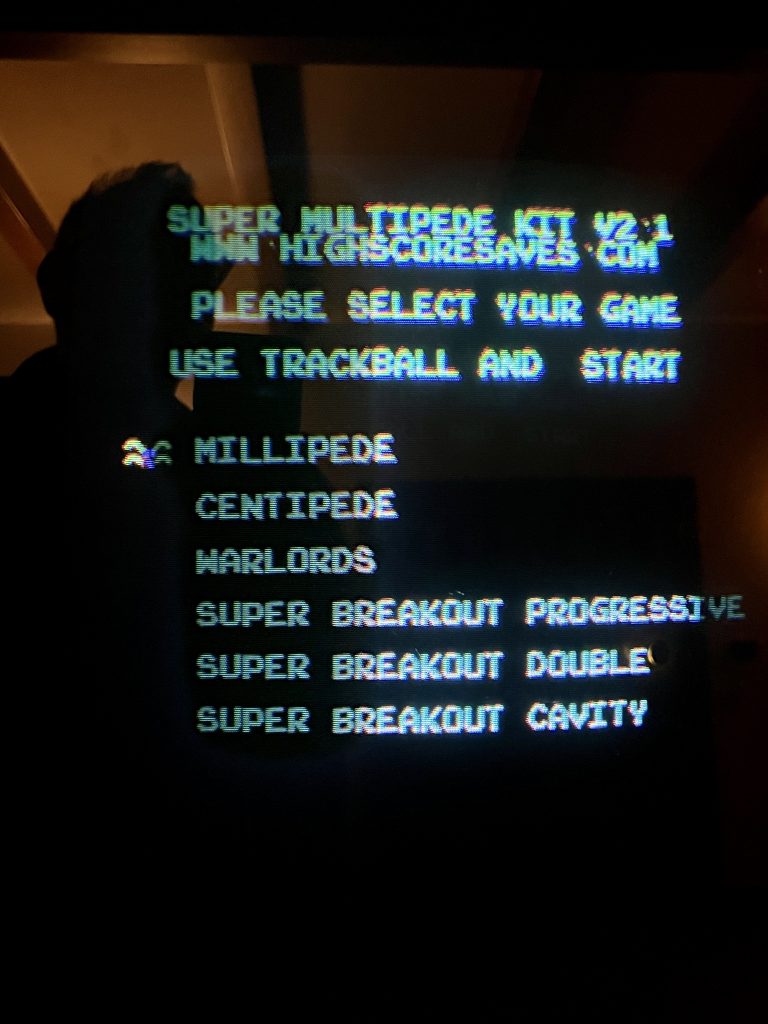 YEAH! After that, the Millipede cabinet becomes that much more awesome, allowing for some Centipede action! 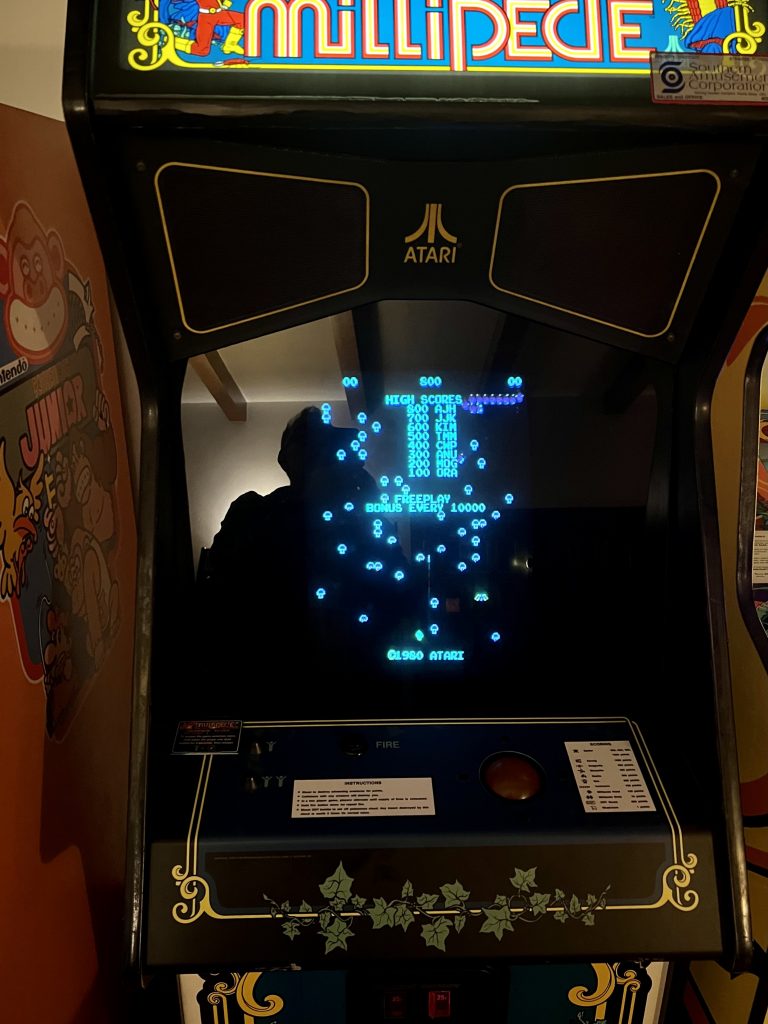 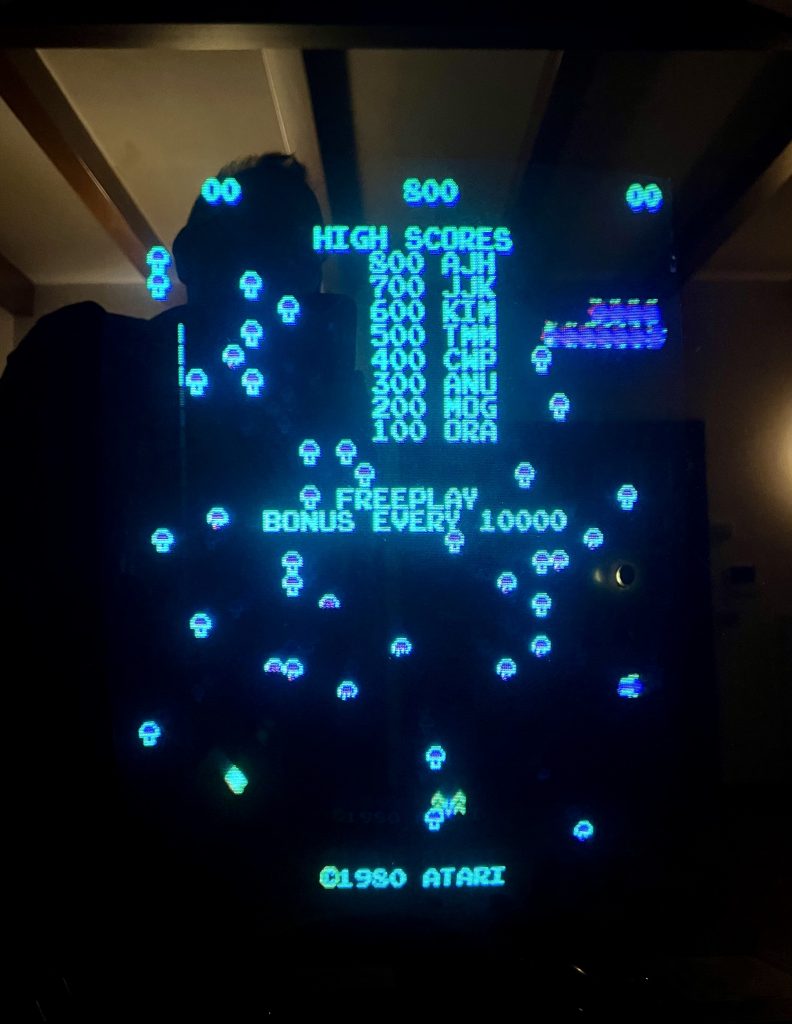 Or even some Super Breakout, which was Tommaso’s favorite, even though I pawned him for the high score quite quickly!

I have to say this was a welcome win after a weekend of bavacade despair. I am thrilled it worked, and I am loving the Multipede fun. It also  bolsters my confidence for two more multi-game projects I have on tap, namely the Exidy 440 muti-game mod that will add such classics as Crossbow, Combat, and Chiller (to name a few) to my Exidy Cheyenne machine.  Then, after that, I am going to take on the daunting multi-game Gyruss mod that adds Time Pilot and Pooyan to that Konami classic—Pooyan is a personal favorite, so super excited about that. But in the meantime I am going to enjoy the Multipede in all it’s 4-in-1 splendor!

2 Responses to Multipede: 4-in-1 Cabinet fun!