I’ve been going through the paces of trying to keep the bava in relatively good shape, and one of the things I forgot was a few random audio and video files that were outside the standard WPMS blogs.dir upload folder. While cleaning these up I noticed an audio file of an EDUCAUSE Now show from July of 2008. It was about data-rich blogging, and UMW Biology professor Steve Gallik was talking about the way he was using blog syndication to have students do their labs. I had a copy of the audio on my blog, and I found the original post to make sure it was embedding. While doing this I noticed that every EDUCAUSE link in the post was broken. The link to the 2008 Southern Regional conference, the link to Gerry Bayne’s personal page on EDUCAUSE, the link to the EDUCAUSE Now show, the screencast of Steve’s work, everything. 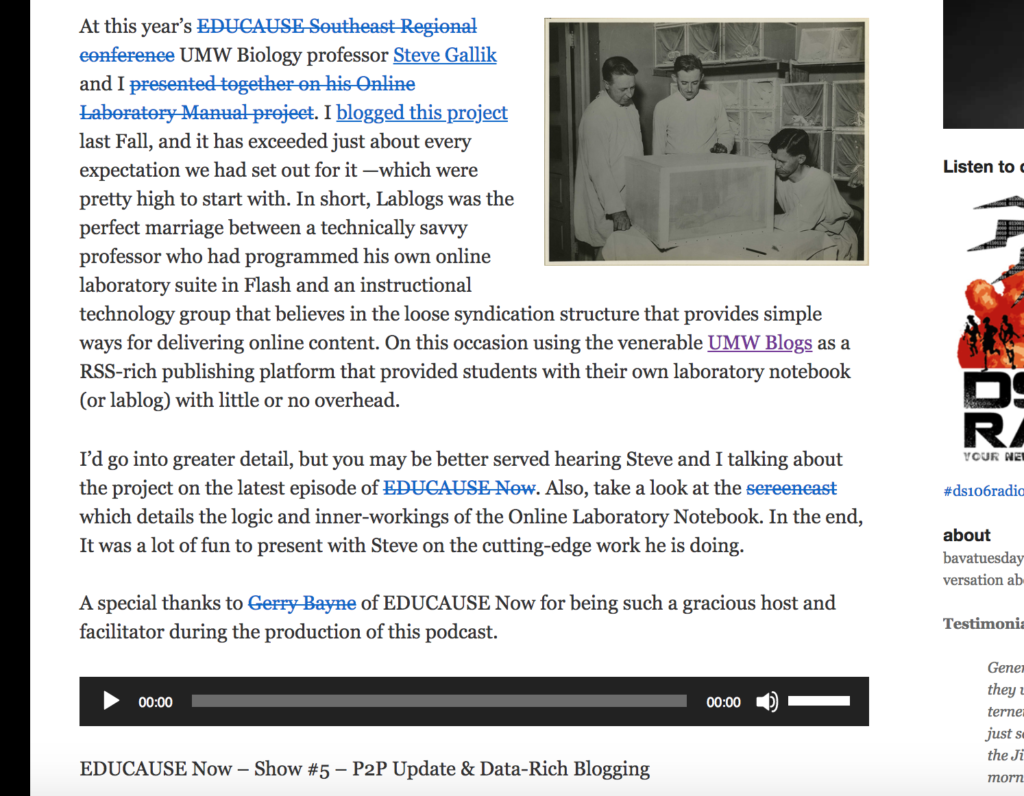 But I did notice the UMW Blogs link is still solid. In fact, Kris Schaffer just blogged about the amazing work DTLT has done to clean-up and preserve this living archive of ed-tech at UMW spanning more than a decade. This is remarkable stewardship of an institution’s online past, and stands in stark contrast to professional organizations like NMC, which I blogged about before, and their complete disregard for preserving any of the numerous events they ran, not to mention the work of the people that were part of them. That is terrible stewardship, and it even got worse when they folded and the entire website was gone. That’s right, GONE!

In terms of 2008, EDUCAUSE is not faring much better, I couldn’t find any of those links through a Google search, I was figuring maybe the net.educause.edu was the issue, but I cannot find any of it at www either. I did see the Wayback Machine has some snapshots from 2008 which I reproduced here, but the links to any media don’t seem to work. And while the service the Internet Archive does is invaluable, shouldn’t organizations also do their part?

A good example of this is the way the folks at IT Conversations archived all of their amazing discussions through the Internet Archive so they will be maintained and live on as a web resource. Fact is, this was a big part of why the the idea of bringing blogging platforms on campus to prevent them from becoming an after-thought running off the side of your desk, but something the organization would support and, in turn, think-through their longevity as an institutional resource. This is also why the personal cyberinfrastructure was often seen as an alternative to spaces like Facebook in the academic sphere, Not only to encourage the building of a sense of an academic self outside the box store chains, but also to give more control and privacy over this work.

While I do think that the personal archive can contribute back— the very act of blogging that EDUCAUSE conference in 2008 kept at least two of those conversations alive on the web—-I also think organizations should be prioritizing the consistency of their web archives.

I often think the fact that bavatuesdays is my individual home online makes all the difference. Do organizational fluctuations and turnover result in such web mismanagement?  Maybe, but then UMW’s DTLT has an entirely new team, yet that work has been done because there’s a broader sense of the value of the digital work done as part of the last decade at that institution’s history. That’s crucial, and with both personal and communal sites running on an organization service like UMW Blogs preservation and sense of consistency and history to document the intricacies of transformation of teaching and learning over the last 15 years becoming something more than a maintenance issue, they become an archive.