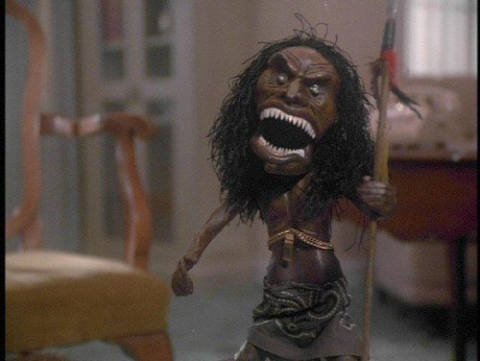 For some reason Chucky’s far more frightening predecessor, the African Zuni Fetish Warrior Doll from the 1975 telemovie Trilogy of Terror, was on my mind earlier this evening. So, I promptly searched for Trilogy of Terror on YouTube and, as always, I found the goods. If you haven’t seen this classic written by Richard Matheson (author of the amazing novella I Am Legend) you really should, and if you have you seen it already you know exactly what I am talking about. , YouTube user and archivist of the treasured clips below, does a nice job framing it with the following description [Update 2/27/2018: Deraman’s YouTube account has since been deleted, as all the great ones are]:

Trilogy of Terror”, a Dan Curtis telemovie, was a collection of three horror anthology stories featuring Karen Black in four different roles playing tormented women. While all of the tales were notable, it was the third which has become legendary.

In the final story, Amelia in a solo horror story monologue plays a mother-dominated woman who buys an African Zuni fetish doll for her latest boyfriend in which the doll comes to life and terrorizes her in her own apartment.

The following is the culmination of that struggle, and is still some of the creepiest television ever shot.

And here is what may have been one of the most horrifying endings I ever saw on a VHS tape:

What’s even better, is that given YouTube’s groovy related videos feature I found a film dealing with Zuni fetish dolls that I had never seen before, seems like it is a veritable sub genre I have not been clued into before YouTube. Here’s a clip from the 1985 movie Attack of the Beast Creatures, obviously inspired by the Trilogy of Terror -with little of the terror unfortunately.

What’s more, through a quick search I found out that there is an actual doll one can buy based on the African Zuni Warrior doll from the movie, which is too frightening to even imagine.

On the other hand, I think I could live with the Evil Krusty the Clown parody of the demon doll from the “Clown without Pity” episode of the Simpson’s Treehouse of Horror III. Why is it that dolls are so damned freaky?

This entry was posted in movies, video, YouTube and tagged attack of the beast creatures, horror, karen black, krusty the clown, movies, the simpsons, trilogy of terror, YouTube. Bookmark the permalink.

9 Responses to Trilogy of Terror