Last night I had the distinct pleasure of presenting on the convergence of three topics that fascinate me in light of our cultural moment: zombies, pirates, and copyright. All three are big both in Japan and on the internet :), and I wanted to see if a loose and fun cultural history of zombies and pirates as a way to think through the state of copyright currently might be a fun talk to deliver for the Speaking Center’s Octoberfest event—and it was! The frame for Zombies is born out of a personal fascination and a post I did a few years back on the bava (one of my all time favorites) titled “Zombie Labor.”

The general gist returns zombies to their Afro-Caribbean, colonial roots and frames it in relationship to race, slavery, and labor—the Haitian revolution as an instance of this struggle for liberation from the “white zombie.” The idea of zombies as mindless workers alienated from themselves—not necessarily brain-eating corpses—but also indicting the parasitic relationship of the masters that control workers and force them into enslaved labor is a powerful figure that we changes the more popular biological vision we have currently. You can argue that George Romero starts the recent frame and breaks with this Afro-Caribbean tradition in 1968, though he does preserve the question of race and colonial struggle with the main character and his demise at the end, echoing both the Vietnam War and the Civil Rights movement of the late 1960s. The film was delivered to NYC the night Martin Luther King, Jr. was assassinated. 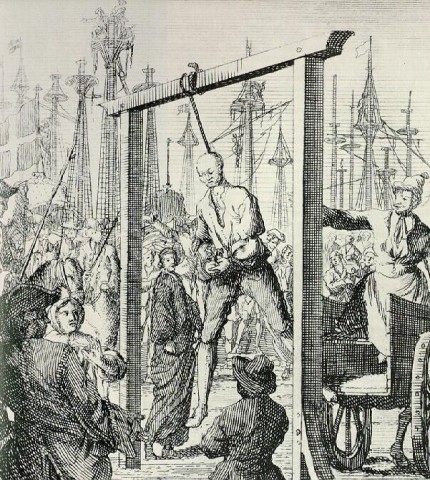 Part II, dedicated to pirates, frames a similar history of labor in which a band of proletariat revolutionaries challenge the existing terror of emerging, capitalist nation states. Historian Marcus Rediker articulates the three periods of the Golden Age of Piracy (from 1650-1730) in his book Villains of All Nations, Pirates in the Golden Age, which I discuss. In particular Rediker focuses on the moment after the War of Spanish Succession (1700-1704) which roughly lasts from 1716-1726. This was the moment wherein the pirates we most commonly identify in contemporary culture hail from. Figures like Edward Teach, more commonly known as Blackbeard, was captured by a group clandestinely commissioned by Virginia’s Lieutenant Governor Alexander Spotswood. A particularly interesting fact locally given we live right up the road from Spotswood’s colonial iron works and legendary home the Enchanted Castle (located in Spotsylvania County, named after his truly)—a space referred to regularly as Spotsy, or Spotsyltucky if you are feeling frisky. The most compelling point Rediker makes about the pirates of this era is the proto-democratic structure of the community, the unified voice of labor struggle, and the willingness to fight force with force. What is depressing is how brutally and swiftly this moment of piracy was crushed and any articulated challenge to dominant notions of global distribution and private property were crushed.

Finally, I spent the last part of the talk trying to relate the cultural history of both zombies and pirates to internet culture using the laws of piracy in 1721. There’s still a sustained and compelling study to be done here to tie copyright in, but I have to take the next steps and spend some time researching the cultural history of copyright over the 17th, 18th and 19th century in the colonies and beyond. That would round this talk out brilliantly. What’s more, I taught a Summer class back in 2007 (an early online, open course that was pretty awesome) called “Discipline and Punish” (stolen shamelessly from David Kazanjian’s grad school class I took with him dealing with this topic) which dealt with these same issues through Michel Foucault’s theory of the emergence of new forms of crime and punishment that internalized the ideas of control and self-policing by reading the colonial literature fo the time, including Cotton Mather’s telling of pirate William Fly’s defiance at his hanging. In fact counterfeiting (or illegal copying 🙂 ) was a huge crime in the early Americas. This part needs the most work and I recognize that, but for me it was an amazing opportunity to get out in front of number of students (thank you Daniel, Haley, Will, Jessica, and all the others I don’t know the names of) and the ever awesome Jack Bales to present my ideas. Particularly given everyone not only showed up, but remained engaged, excited, and infectious to the bitter end! It was a great night, and reminded me how awesome it is to be a part of learning community on the ground. I’m really fortunate to be asked to do these things, and special thanks to Russell Michelson for thinking of me for this, I was honored. It’s been a great semester for reading, thinking, and trying to return to some literary theory, cultural critique and intensive reading and discussing of a wide range of texts. Always more to do, but in the end UMW has been very good to me in this regard, the space has embraced me as more than an instructional technologist, but also a thinker—and we all need to do that. We need to think of each other as thinkers because that’s what we need to be when we meet each other in that space, and I love it! It makes me miss Brad Efford 🙂

6 Responses to Zombies, Pirates, and Copyright