It may come as no surprise that I am fascinated by the privileged position zombies have come to occupy in our cultural imagination recently. And while this surge may be related to our penchant for endless war as this article argues, I wonder if it might not have something to do with a trend towards disinvestment and dehumanizing of the labor force around the world in our current moment.  It’s a big jump, so bear with me for a bit. I’m actually excited that zombies have become the operating metaphor for our culture these days, because I think it’s right on in many ways. Lets face it, we all go mindlessly about our consumption of both things and one another, and our world is becoming a wasteland filled with the walking dead as a result. I’ve been thinking a lot about the various “uncarnations” of  zombies in popular culture over the last 75 years, and I originally thought this post would be a wide-ranging, idiosyncratic link fest to a ton of online examples. However, the thought of such a project is way too overwhelming at the moment. Hopefully I’ll get to this project, but in the mean time I’ve recently watched the zombie film that started it all: White Zombie (film) (1932). 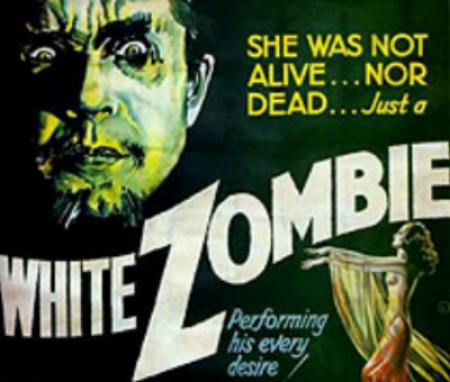 White Zombie provides an interesting frame for making sense of one of the things that has kind of pissed me off about the recent rash of zombies in movies and games, namely they move too god damned fast. What’s up with that? From 28 Days Later (2002) to the 2004 remake of Dawn of the Dead, zombies started pulling a Jessie Owens on un-expecting audiences everywhere, and I for one found it not only off-putting but disorientating. How does the idea of speed and a kind of angry intensity figure into the long, rich tradition of the zombie? I have pained over this question, and I have heard some interesting talk about the idea of zombies being scarier if they are faster or a reflection of our instantaneous, efficiency driven culture.  There are also the ideas that the CGI craze has replaced an interest in make-up artistry—which is hopefully not a disappearing art form.

The thing is, zombie movies have transmogrified into fast-paced, vapid action films—a Hollywood standard these day—rather than keeping any focus upon the more psychologically grinding and gory tradition of horror that is often a vehicle for cultural critiques though allegory. So while we have an explosion of interest in all things zombies these days, it often turns out to be divorced from a powerful critique of our culture as we might see in classics like Night of the Living Dead (1968) or the original Dawn of the Dead (1978). Current films don’t even have the hardcore gore and insane scenes like a zombie battling a tiger shark which you’ll find in Lucio Fulci’s Zombi 2.

These days zombies have never been in greater need of some kind of direction, a larger purpose in our popular imagination, and that’s why a recent viewing of White Zombie has me thinking anew about the rich possibilities of the zombie figure. This film is freely available on the Internet Archive here, and it comes highly recommended. You can also find Victor Halperin’s follow-up zombie film Revolt of the Zombies (1936) on the Internet Archive as well.

What I find remarkable about White Zombie is the logic of labor that runs through the film. Bela Lugosi plays the evil, colonial plantation owner in Haiti who has been turning the locals into zombies so that they can effectively run his sugar plantation and mill. An entirely zombified labor force that effectively does his bidding without question, all thought is lost and the act of labor is eternally repeated even from beyond the grave. The zombies are not flesh eating automatons in this film, but rather a disenfranchised group who have been forced into mindless labor by a wicked sorcerer/master.

What’s wild about this early vision of the laboring undead in White Zombie is that it carries with it a rich history of insurrection in Haiti. Toussaint Louverture is the slave who became the leader of the Haitian Revolution against the French colonial power during the late 18th century, which was the first and only successful African-led revolution in the Western Hemisphere. A nine year insurrection (1791-1800) that established the first republic run by self-liberated slaves of African descent. Interestingly enough, such a revolutionary sentiment was widespread at this moment in history, especially given the recently formed United States of America and the French Revolution, yet such a successful slave revolution was more a source of fear and horror than solidarity and support for what might seem obvious reasons.

So it may be no surprise that the very idea of zombies would originate in the “Afro-Caribbean spiritual belief system of Vodou, which told of the people being controlled as laborers by a powerful sorcerer.” Think about this for a second, laborers controlled by a powerful sorcerer, which seems so much more germane to our moment than some virus strain, aliens, or a cosmic meteorite.  At the very heart of the figure of zombies is the idea of the exploitation of labor.  The divorce of everything that is human and soulful about individuals in an attempt to make them mindless automatons who simply go about the process of producing for someone elses profit.  Wow! That’s wild.

Tthe following clips from White Zombie capture this spirit wonderfully.  The first takes place in the opening of the film wherein we are introduced to the unassuming protagonists of the film who are being taken by coach to their guests plantation. On the way they encounter the evil master/sorcerer (Lugosi) and his army of zombie laborers.  Not only does this scene have an awesome special effect wherein Lugosi’s disembodied evil eyes are  superimposed upon the carriage and we slowly watch them  return to his head as he comes into the scene—suggesting this magical/otherworldly quality of this figure immediately.  After seeing the Zombies the black coach (Clarence Muse) driver immediately yells “Zombies!” and takes off like a bat out of hell. And when he is questioned about his actions he delivers a classic, non-stereotypical explanation of zombies as laborers in the local sugar mill.

In a scene soon after this one, we actually get to see the Zombies in the sugar mill which may be my favorite one in the entire movie.  The shots are both beautiful and creepy—it’s reminiscent of the famous scene from Fritz Lang’s Metropolis wherein Freder’s discovers the workers who labor deep beneath the city and whose bodies are in many ways tied to the machines that they operate.

How about that, who knew zombies where all about the state of labor both in the late 18th century, as well at the height of the depression in 1932 when White Zombie was made? Perhaps the idea of the zombie as a representation of the all but dead logic of collective bargaining and organized labor might be a new and extremely important thread of the zombie legend to return to for our moment.