Behind Every Retro Arcade is a Preservation Community

I know I told Tim I’m done buying games for Reclaim Arcade after securing Zaxxon yesterday, but I don’t want to jinx myself given I just saw a mint Gorf machine up in Pennsylvania on the KLOV forums for $900. It’s clean, and like Zaxxon another game that was a staple of the early 80s arcade. That said, I think Reclaim Arcade is at—or even a bit beyond—it’s game capacity at this point. Right now we have 58 arcade cabinets, four of which are undergoing maintenance, namely Missile Command, Battlezone, Space Invaders, and Q*Bert, and one more that’s in transit (Pleiades) that will probably not be on the ground for the opening in two weekends. We’ve tried to reflect all of this on our Games page on the website, which is one that I really love: 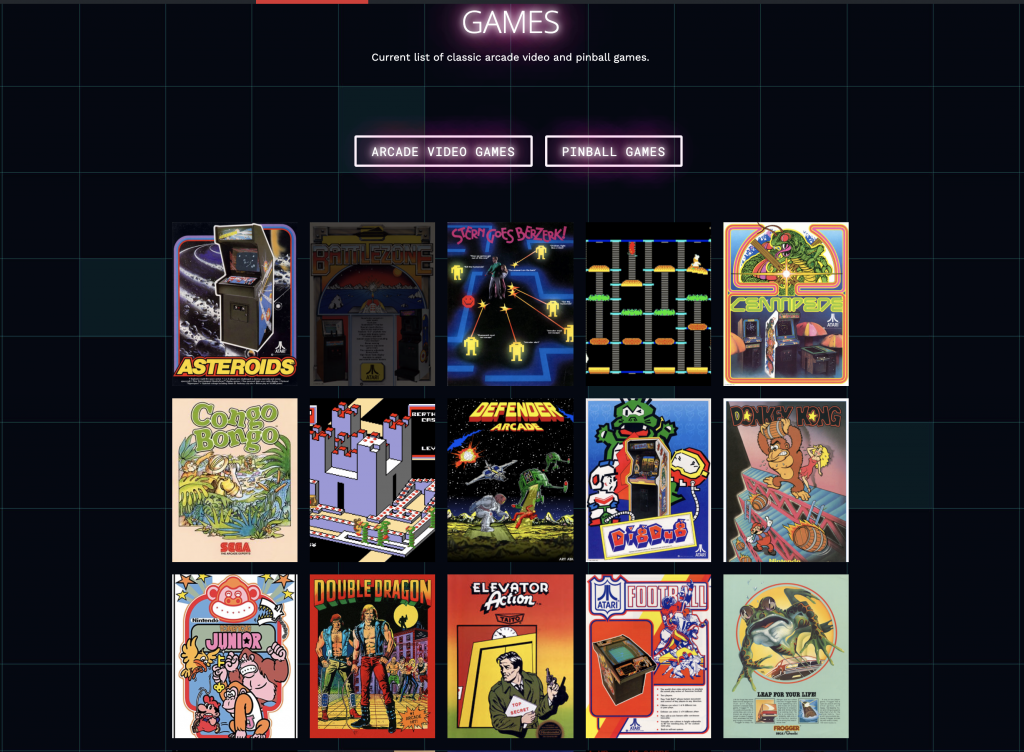 Lauren Hanks did an absolutely stellar job on the website for the arcade, and the Games page is easily my favorites element. With a tiled list of all the games that feature either old school adverts for the games or animated GIFs of the game play, it’s both informative and playful at once. And when you mouse over a game you are told it’s name, whether it’s currently available, and finally a link to that game’s KLOV’s arcade-museum.com profile: 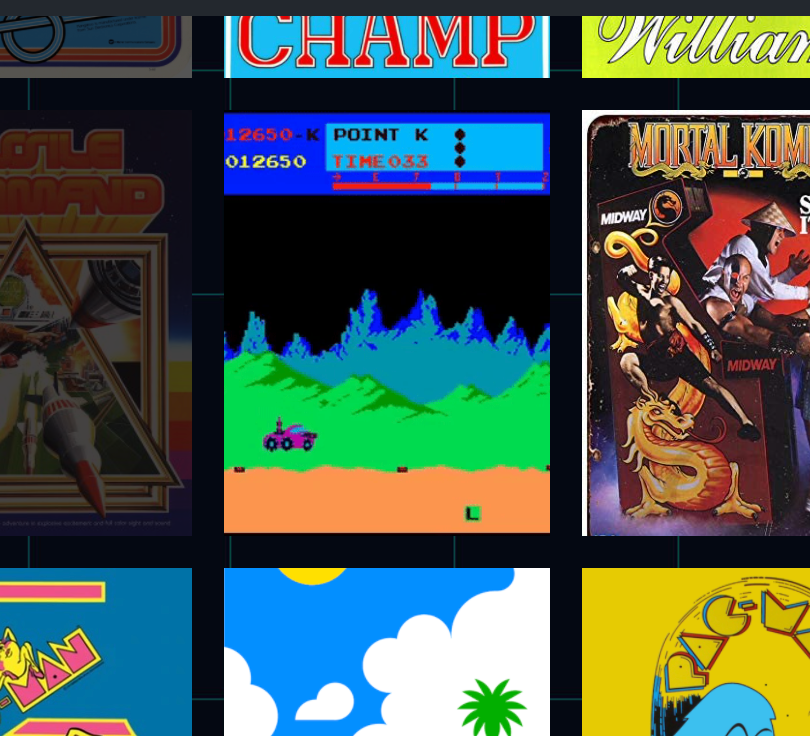 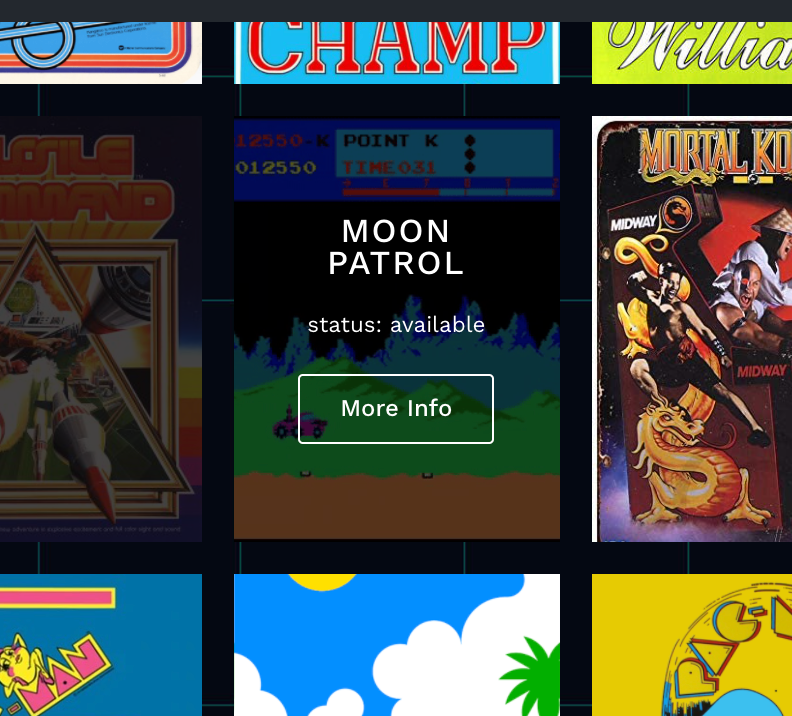 Once you mouse over the image more is revealed

We are also using features on the site to immediately indicate if a game may be unavailable by shading the image a bit to suggest it may have an issue. You can kind of see what I mean if you look at the image of Missile Command to the left of Moon Patrol above. Loving it, but this tiled list of games also speaks to over two years of game collecting, which has often meant driving to far away states, meeting other hobbyists and collectors, and making relationships with awesome game restorers. If you are going to open a retro arcade it would behoove you to embed yourself within the broader community of retro game collectors. One of the students in Zach Whalen Games and Culture class remarked on our work by saying: “You’re basically preservationists.”  That’s probably a bit too generous given we are using them to run a business and offset the cost of rent, loans, etc. but there is no question that a significant part of the retro gaming community on KLOV are doing just that, and I think it is pretty cool. 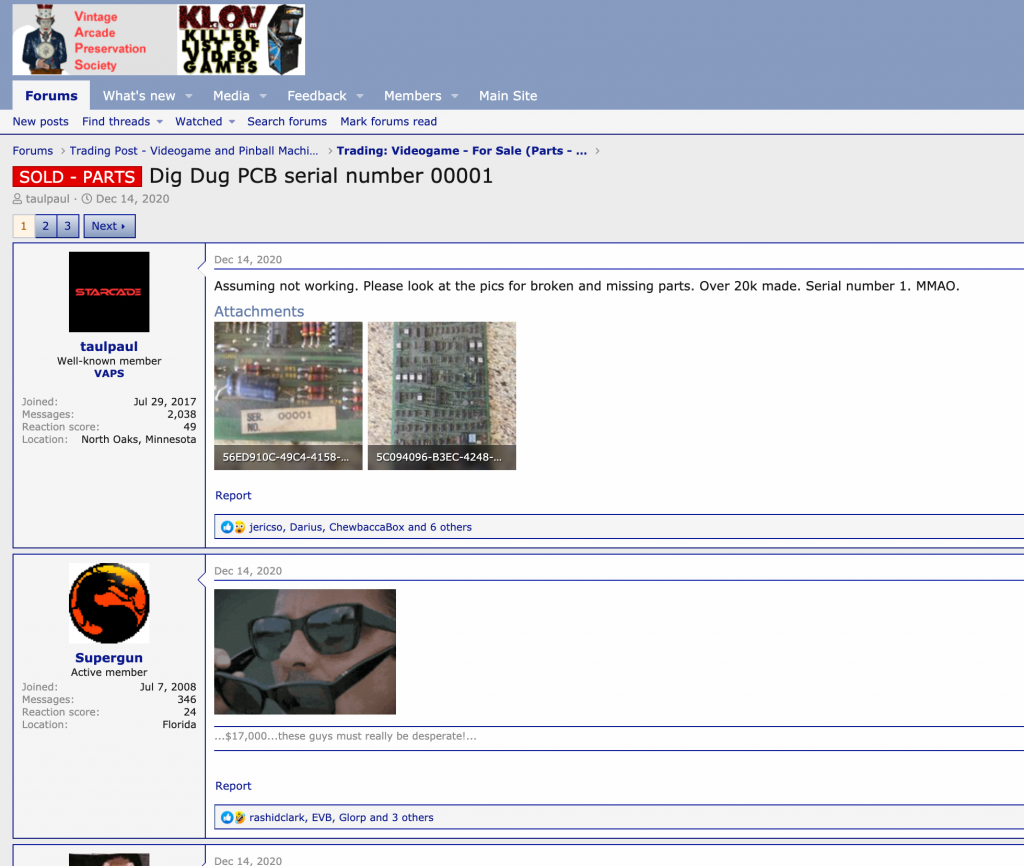 One recent example that stands out in my mind was when a KLOV forum member posted the first Dig Dug PCB (Printed Circuit Board) ever made, serial number 001! So basically ground zero for commercial circuit boards for one of Atari’s most beloved, early-80s arcade cabinets. That’s pretty cool if you are into that kinda thing, and the forum post around it is illustrative of the tension in this community. Many of the community members are preservationists at heart, and they often pull out this GIF, which I love:

But then there are others that suggest getting top dollar for it given it is a collector’s piece, and the tension between commerce and preservation plays out. That said, most of these items are part of personal collections, and with the renaissance of retro arcades since 2005 or so, arcade machines have new currency. This greater perceived value probably accounts for why so many awesome pieces are both so well preserved and so readily available, if also more costly. When I look back 10 years ago to what folks were paying for PCBs versus now, the inflation is fairly steep. COVID-19 has certainly put a dent in some of that, but by-and-large the games keep getting older, the parts scarcer, and the community more intent on trying to preserve the games while controlling price inflation.

I know the forums forbid price policing, but the KLOV community is populated by a lot of folks who have worked hard to preserve the games other folks are buying, so there’s a kind of an unspoken community ethos that games that are over-priced should think twice before posting lest creative ways to say “that’s too damn much” be exercised. Most of which start by saying, “I know we are not supposed to price police here, but …”

Fact is, there’s a definite pecking order in terms of quality vs price in the various cabinet arcade forums I follow. KLOV is where you go if you want the best quality game at the lowest price. It’s been the place I have gotten most of our best games at the most reasonable prices, and many folks also cross-post to Facebook, but there are numerous groups and that is more of a hodgepodge. What’s more, prices can trend a bit higher and by-and-large those groups are all about selling—whereas buying and selling is only one part of KLOVs community.

Then, at the very bottom, is Ebay. This is where sellers usually go if they want to sell the same product they listed on KLOV or Facebook with a significant mark-up. You even see KLOV posts that say posting this here for X amount before going to Ebay where it will be posted for X+Y amount. In regards to Ebay I have found this true in my own experience of buying arcade games there. I have gotten a few deals on Ebay, but no where as good as Facebook or KLOV. But I will say sometimes Ebay is useful when you need a PCB board immediately and you’re willing to pay a mark-up. What’s also interesting to me is that the only bad experience I’ve had with a seller after scores of transactions was on Ebay from someone on Long Islander no less—which I should have guessed given what I know about where I grew up …. f**king Long Islanders 🙂

I find this all really interesting because it took a bit, but after the last year (4 or 5 months of which we tried not to think about the arcade given COVID) I have had not only renewed interest, but more intense as well. I do enjoy buying cabinets and various parts for Reclaim Arcade, but I have also become much more interested in KLOV as an online community. I no longer just read the buy/sell threads, but have moved to general discussions wherein people discuss whether Pole Position was, indeed, the first 16-bit arcade game or not—there is some hardcore knowledge and unabashed schooling going on in that thread! All of which has led me to actually finish my KLOV profile and officially join the Vintage Arcade Preservation Society (or VAPS). 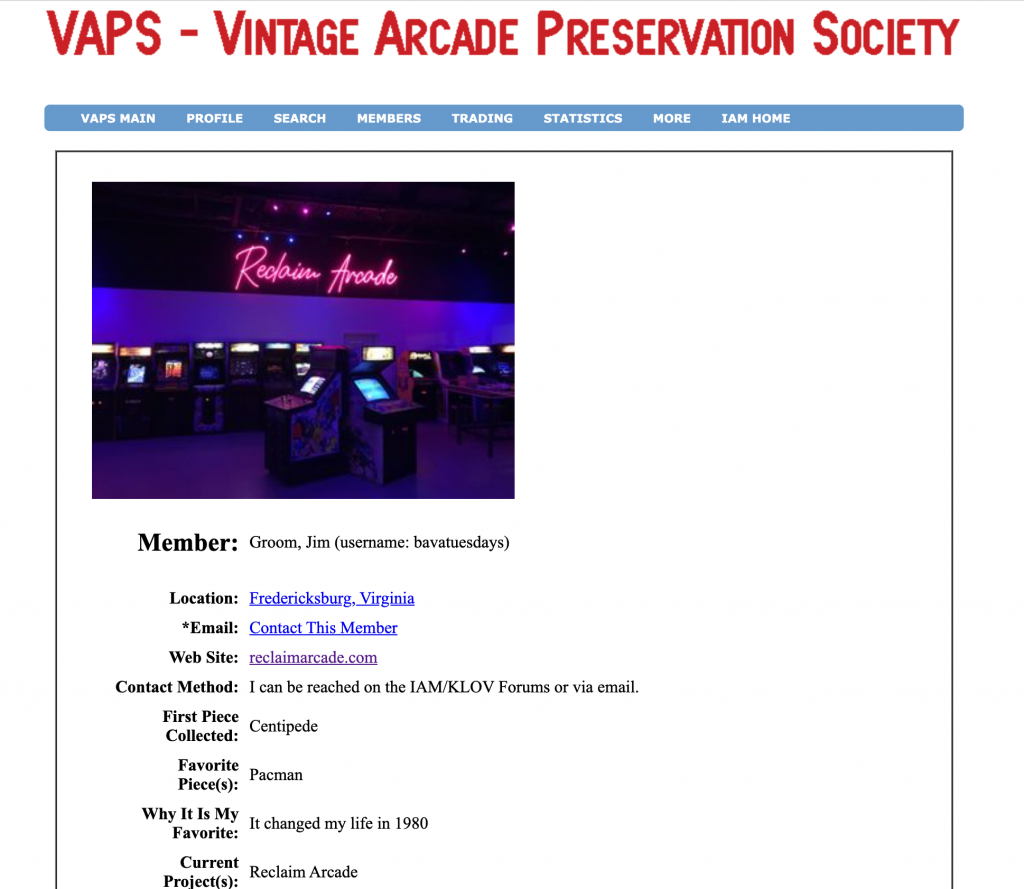 I have found this community a welcome distraction for the last six months, and I figured it was just a matter of time before I started posting more about my interest in this stuff here on the bava. I have to remember that this blog is about media of all kinds, not just the edtech world which I personally find myself in a bit of a rut. I’ve come to the moment in my career as an edtech where I see the same conversations and discussions coming around again with the same results and conclusions, and it can seem a bit pointless at times. Luckily I still see blogging as transcendent of any one field or “career.” I’m sure the retro arcade cabinet community has all the same trappings, and I bet things come around again for the old timers that makes them shake their collective heads, but the one advantage I have in that regard with the retro gaming community is it’s all new to me—I am still quite green. In fact, this may be a good argument for changing gears a bit to prevent getting burnt out or, even worse, jaded.

Anyway, I have no idea how a simple post about Reclaim Arcade’s games page became an extended train of thought about community, but then again I think I remember now [I also had to change the post title by the time I got to this paragraph]. Every game we obtained over the last two and a half years has a person behind it. Someone we had to deal with who is in the hobby and has something to share or recommend. I’ve been deeply impressed by more than a few of them for their kindness and genuine concern for these artifacts of the past that they consider themselves caretakers of before passing them along to their successor. I think that’s the part of this I like the best, Reclaim Arcade is not only a fun idea for folks in Fredericksburg and beyond to experience these machines in a bitchin’ environment, but there is also a sense of having the time and space to care for theses pieces of our collective history for future generations. It might be small and insignificant in the larger picture, but it feels generative and meaningful on a very personal and human scale.