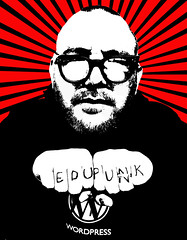 Spent most of the evening last night dancing around my living room with my two little nutballs (full clarification: that refers to my children, and they are very EDUPUNK 😉 ) to the Weezer “Pork and Beans” video. I’ve never been a major Weezer fan, though I liked the Buddy Holly song, but that has all changed after this last stroke of genius. The video is a YouTube meme in the most self-reflexive of ways. It brings together all the YouTube phenomes that in mnay ways reflect the changing realities of the DIY media and our cultures sense of celebrity.

Every movement needs an anthem, and while this song may soon be played out, I will be the first to admit that it has been stuck in my head ever since the great Jerry Slezak tweeted it in on Friday. He followed up with a tweet about this post which lists all the YouTube videos referred to in this pop culture gem

If that video doesn’t do it for you as an anthem, then I think the Teddybear’s “Punkrocker” featuring Iggy Pop may hit a chord or two (thanks for this one Mikhail).

Update: Andy Rush just noted that this song is the backdrop to a Cadillac commercial, hmmmm —is that EDUPUNK?

But perhaps the most intense anthem I have come across since yesterday wasn’t a song, rather this post by Doug Noon I found via Stephen Downes’ OL Daily yesterday (he even referenced EDUPUNK in the write-up –how cool!). The post eulogizes the late, great Utah Phillips —I was particualrly moved by the discusion of the Chicago Conspiracy Trial transcripts, which Doug Noon notes was “a study in political theater” back in the 1960s. I was struck by the transcripts of this trial, and I am going to exceprt a bit of Abbie Hoffman’s testimony below, but go to Doug Noon’s Borderland to read the whole thing—definitely worth your time.

THE WITNESS {Abbie Hoffman]: Nothing. I believe it is called an American education.

THE COURT: I sustain the objection.

MR. WEINGLASS: Abbie, could you tell the Court and jury–

MR. SCHULTZ: His name isn’t Abbie. I object to this informality.

MR. WEINGLASS: Can you tell the Court and jury what is your present occupation?

THE WITNESS {Abbie Hoffman]: I am a cultural revolutionary. Well, I am really a defendant—full-time.

MR. WEINGLASS: What do you mean by the phrase “cultural revolutionary?”

THE WITNESS {Abbie Hoffman]: Well, I suppose it is a person who tries to shape and participate in the values, and the mores, the customs and the style of living of new people who eventually become inhabitants of a new nation and a new society through art and poetry, theater, and music.

That is so EDUPUNK!