I was talking with a faculty member about social networking Tuesday, and while she was giving me some tips on my Facebook profile I switched my relationship status from single to married, something I didn’t think twice about at the moment. Well, at least before the messages started streaming in. A couple were heartfelt wishes from people who couldn’t have known that I’ve been married for years (and I appreciate them), but the vast majority constitute what I consider downright internet hazing! These people knew I was married, but that didn’t stop them from sending their funny little comments to make me rue the day I ever tied the knot. I know who you are, people, and when you make one belated slip on Facebook, I’ll be there with my comment paddle in hand, and you will then pay the bava in flesh! 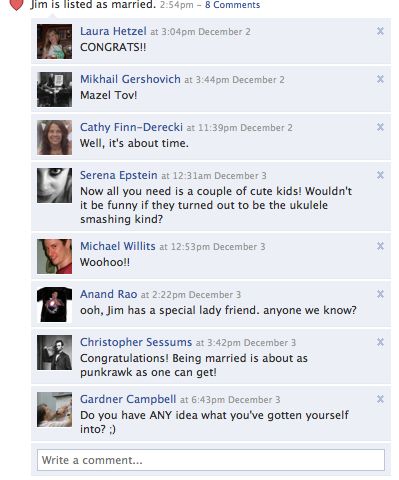 More seriously, I think this might be some kind of emergent social networking ritual that underlines the fun that a constantly running status feed like Facebook’s makes possible. A playfulness that does, indeed, make this space compelling given that people are creating and defining the social codes and practices for networked space all around you. I think the changed marital status is one of the first I have noticed where there is joy in getting your licks in. And this particular form of hazing might be more pronounced as of late given the relatively recent explosion in 30 and 40 year olds storming the gates of Facebook which, as Anand Rao pointed out in a Social Networking meeting we had recently, might very well mean it’s on its last leg 🙂