Once again the Internet Archive delivers the goods. Check out this amazing documentary by June Steel about Edward Kienholz’s retrospective exhibit at the Los Angeles County Museum of Art (LACMA) in 1966. I first discovered Kienholz thirty years later in LA at this 1996 retrospective of Kienholz’s work at the Museum of Contemporary Art in Los Angeles. This exhibit blew me away, and may very well be the most powerful exhibit I have visited to date. 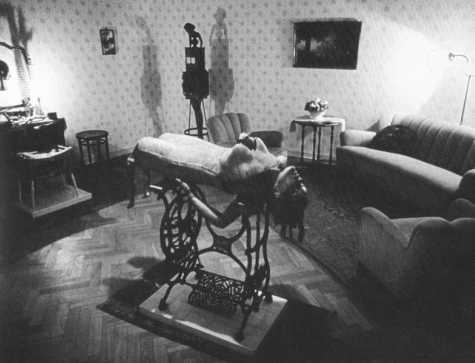 Kienholz’s (and this refers to both Edward and his wife and long-time collaborator Nancy Reddin Kienholz) sharp social critique, crude yet affectionate vision of humanity, accompanied with an insanely detailed and textured attention to things, to stuff, makes viewing his assemblage and installations a kind of being. A being similar to occupying the darkest, most hidden spaces of our culture. It is almost as if you are sneaking into a crime scene or stumbling upon the long abandoned movie set of The Texas Chainsaw Massacre. Their mix of everyday, found materials and horrific human mutations within the most realistic of spaces makes him the perfect b-movie artist in my mind, yet he is far more than that. I kind of think of him as the contemporary of folks like George Romero and Tobe Hooper.

And I haven’t even gotten to the documentary by June Steel yet, which is an absolute ball to watch. She does an excellent job of capturing the opening of this show at the LACMA which was surround by controversy, particularly given the graphic nature of Kienholz’s most famous works which the documentary takes you brilliantly, including Roxy’s (1961-62) (an installation of a brothel –a masterpiece of the highest order in my mind), Back Seat Dodge ’38 (1962) (a truly sensuous and disturbing piece), The Illegal Operation (1964) (an early artistic critique of backroom abortions), and The Birthday (1964). Be sure to check out the part of the documentary where the film crew gets the different reactions from the white and black patrons responses to Roxy’s (the Brothel installation) , it is a brilliant moment in film more generally.

I have to say it, this is a must see!

1 Response to Kienholz on Exhibit