Posters are an Arcade’s Best Friend

Been a bit hectic around here as of late, so posting on the bava.blog has been sparse. But given Trentino is going into full blown lockdown this week, I may have some more time on my hands. That said, my day job at Reclaim Hosting and the OERxDomains21 conference have been keeping me honest. A highlight of the last week was getting these images from Meredith last week to let me know some of the posters I had framed last month were ready. I have something of a frame problem, and I’ve found it harder and harder to tolerate the flimsy, run-of-the-mill poster frames one might be forced to settle for at Michael’s. I guess that qualifies me as a poster snob, and for that I make no apologies. 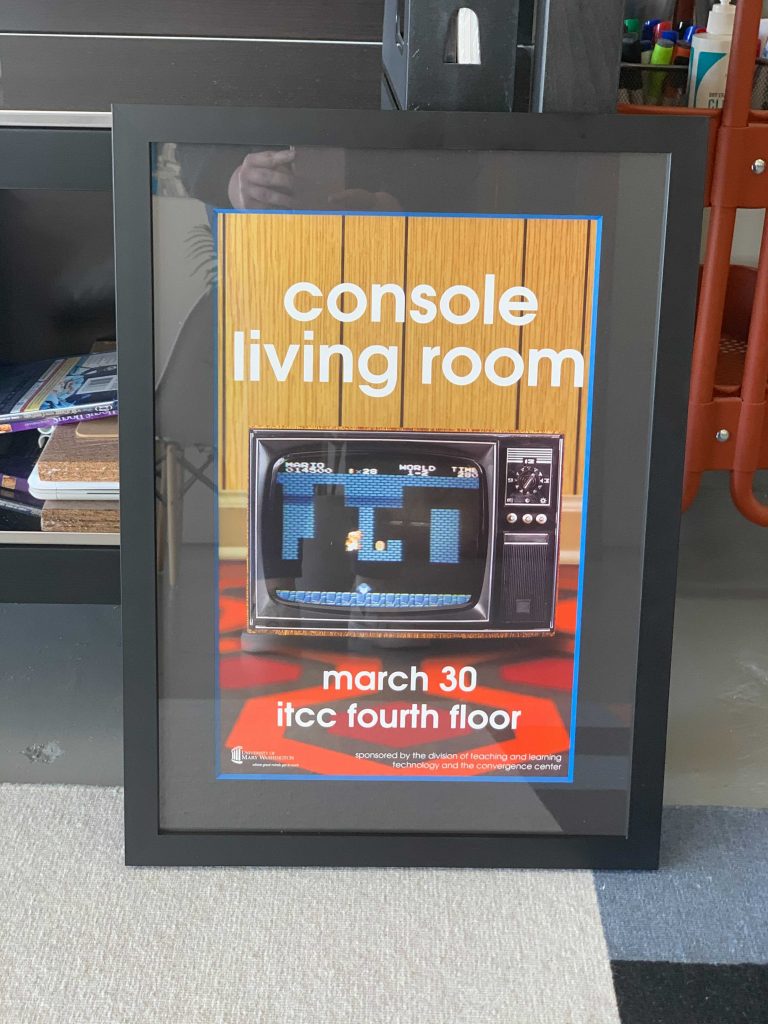 I mean look at the inlaid blue highlighting the bricks in this gorgeous Super Mario Brothers UMW Console poster! Is that not beautiful? I waited far too long on the special wood grain frame that I ordered but that was not happening so I reverted to a black wood grain, and I like it with the black matte. I also like the way this poster captures a moment before the UMW Convergence Center (ITCC) was renamed the Hurley Convergence Center. This remains one of my very favorite projects from the UMW days, we had no approval making it an entirely rogue operation done on a less-than-zero institutional budget (I spent several hundred dollars of my own money, as did my co-conspirator Zach Whalen).  There were some groups on campus who read it as a site of resistance against the construction and management of the $40 million dollar ITCC (which it wasn’t necessarily), and I got no endless  joy at how it became a kind of  cultural weathervane. Most importantly, however, was how this project became the inspiration for the living room in Reclaim Arcade, and it seemed only appropriate to frame one of the four posters we created for the space as a kind of physical hyperlink to that project. 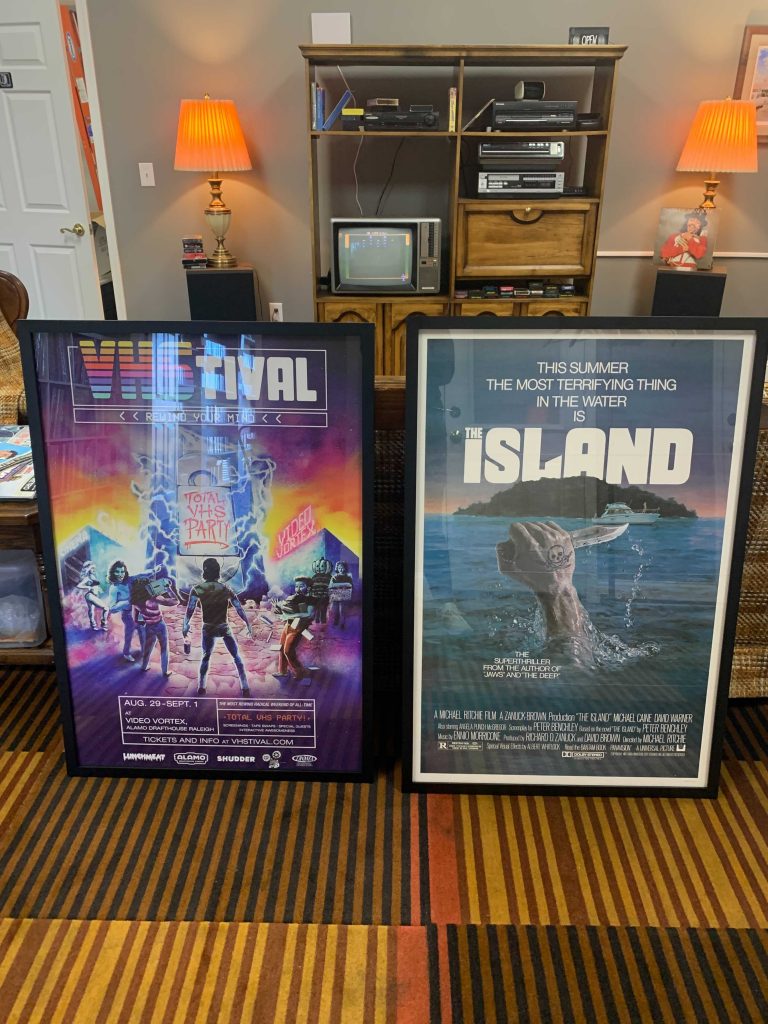 VHStival and The Island movie posters

Moving along, we got a few movie posters framed, but in reality only one of the three are of an actual movie. The VHStival poster was marketing for the VHSstival in Raleigh, North Carolina Tim, Miles and I went to in 2019. It was a total blast, and I figured it needed it’s own simple, but solid, frame with real glass. The Island (1980) poster is actually for a real-life movie, although the poster is far better than the film. The artwork, at least for me, is one of the most iconic of the 1980s, and it was also an early epiphany for me that the poster and the film are often two entirely separate artworks that, at times, can work against one another. Like in this case wherein the one sets your expectations high and the other shoots them out of the sky. The Island poster came with a letter from the original owner who was a movie theater manager. He wrote about the history of the poster, noting it’s an original 40+ year old poster he had in his movie theater which then became part of his personal collection. He sells them on Ebay, and  I love it when you get a look at the history of the artifacts you collect.

TOMORROW I’ll be the guest on WFMU’s (NYC) film-music radio show MORRICONE ISLAND.
We will be discussing my first book “The Saint I Ain’t”, as well as tracks from my film scores. I’ll also be reading a few stories.
2/16 7PM (EST).#amwriting #WritingCommnunity #music #shortstory pic.twitter.com/pGaucqg02b

I recently noticed that Devon Levins’s WFMU show Morricone Island was using this poster (after a long haul with The Warriors branding) for his show which made me very happy. 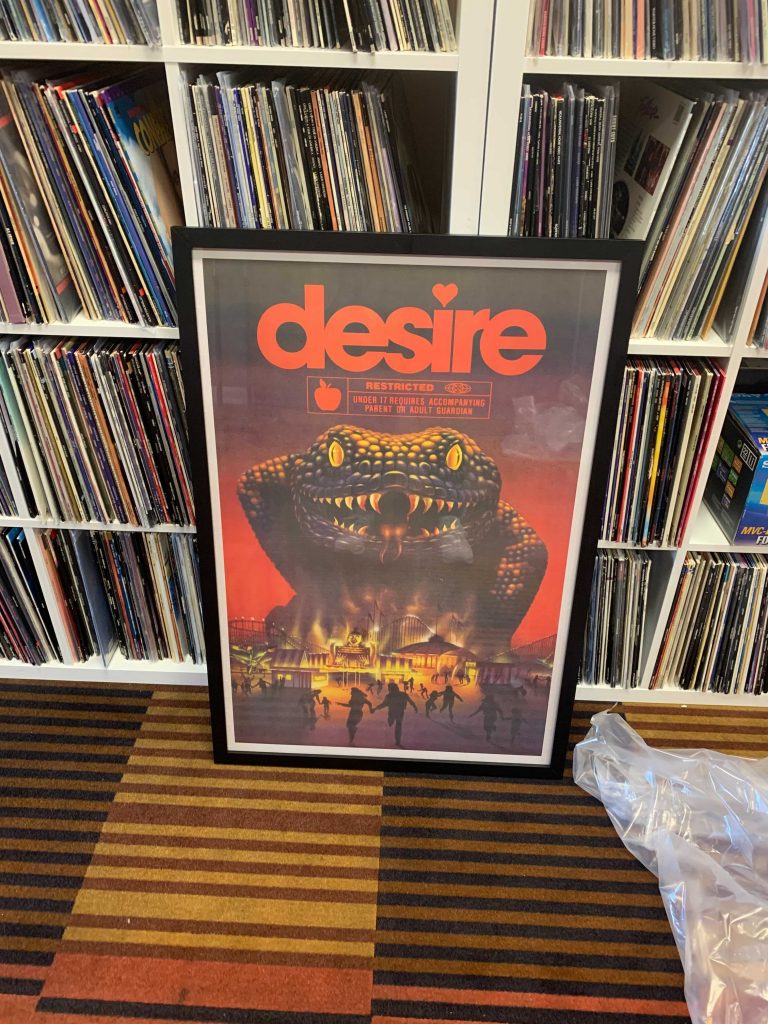 Finally, I got a surprise poster from the Italians Do It Better record label that had to be framed because it’s so awesome. It’s for the synth-pop band Desire and it has an image of a gigantic Snake attacking an amusement park, which is exactly the film I want to see. That said, it’s not a film at all but rather more of the creative magic that seems to go hand-in-hand with not only the ITIB record label, but the whole synthwave movement. I love the way a whole artistic micro-movement has appropriated the 80s and made it do their bidding, I kinda feel that Reclaim Arcade is tangentially related to that movement somehow, we just can’t play music 🙂

And with that I have blogged about the minutia of the arcade that gives me an endless amount of joy, now to jump on the robot and figure out where they should be hung.

1 Response to Posters are an Arcade’s Best Friend