I had a pretty unbelievable experience the other night watching the late, great Michelangelo Antonioni’s L’eclisse (1962). I’m not sure how to explain this film, for the actual narrative itself is rather empty. Yet, it becomes immediately clear not five minutes into the film that this emptiness is very much at the core of its meaning.

The film begins with a painful break-up between Vittoria (Monica Vitti) and her distraught boyfriend Riccardo (Francisco Rabal). Yet, immediately after this breakup the film becomes a study of landscapes, the built environment, and things. Even before Vittoria leaves her ex-lover’s home, the world around her is visualized as an alien, hostile landscape. Immediately outside of the house is a huge tower shaped like and industrial fungus (phallus?), which looms large in several subsequent frames creating the atmosphere of another planet. 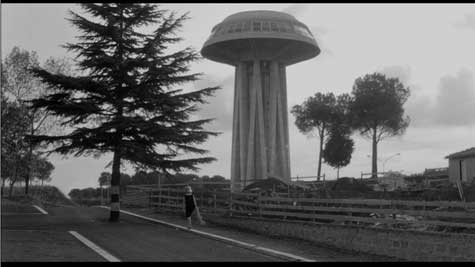 At that point I began to sense that this film was not going to be a dreadfully painful study in relationships like many of my least favorite European classics (such as FranÃ§ois Truffaut’s The Soft Skin, for example). In fact, this film is a study about everything that surrounds relationships, quite literally focusing on all the things, surfaces, built structures that constitute the world that we live in, while pointedly de-emphasizing focus on actual interactions between and amongst people within these foreign landscapes. The cinematography is nothing short of stunning, and the shots themselves work together as a kind of study in the abstract relationship between things, not people.

Watching L’eclisse was particularly interesting for me this time around, because it frames a couple of ideas that I have been thinking about a lot lately. Namely, the power of deep attention to surfaces. The surface is often an idea that is easily dismissed, a space that represents something apparent that must be transformed to metaphor for value. Yet, what if the surfaces in L’eclisse don’t necessarily stand-in for anything in particular, but rather tolerate our connections as we attempt to archive and order the surface in an attempt to create relationships and search for any sense of meaning they refract back upon the characters.

The notion of an archive of surfaces that Michel Foucault discusses in the Archaeology of Knowledge is particularly poignant here because it traces the idea that the power of a text has everything to do with its position upon a surface, or placement within the mise-en-scene to remain more filmic. Celluloid film is in many ways the embodiment of our relationship to deep surfaces as they unroll in a long, thin sequential loop through the projector which shines out on a larger than life surface. On the other hand, the cropped surface of the internet opens up these deep connections (without any sequential march) which leads to a complex relationship within a variegated landscape of things that we can often interact with in a variety of ways.

Yet, there is no question in my mind that the power of surfaces and the limits of more traditional narratives is ever more apparent as we spend more and more time both consuming and creating our own surfaces within a peripatetic web of things. The difficulty of beginnings and endings, the crisis of influence and origins, and the rate at which relationships between texts are created and destroyed upon this new surface frames a unique narrative of things that we can’t ever know entirely. There is no way to tell the story fully, and these relationships between things exist both because of our own production, but also outside and in spite of it in some ways.

Take for example Scorsese’s discussion of L’eclisse in the following video that offers a very intelligent examination of innumerable experimentations in film happening in the early 1960s, as well as a more pointed discussion of Antonioni’s focus upon the detachment that characterizes the players, and the means through which the landscape of things in the movie in many ways emphasize their alienation. An excellent reading that I entirely agree with in many regards, and I highly recommend you take a few minutes to watch.

One thing Scorsese focuses on almost too much at the expense of some of the subtler issues, is the fact that the very things and surfaces that are supposed to embody and generalize this condition of detachment, also serve to make these characters’s disaffection seem irrelevant. The surfaces themselves become the focus of the film, and the liberation from the traditional “relationship narrative” comes as a welcome alternative. You can actually stare at the apartment buildings as if you have never seen one before. Or follow the faceless flow of people within the Stock Exchange, tracing large groups of people swarm and school together. The narrative of desire, relationships, and commodities will never compete with the deep attention Antonioni pays to the surface of things in this film. The one is purely a ploy to highlight the other.

One scene in particular that Scorsese doesn’t highlight, but for me is the most powerful example of this idea of surfaces is when Vittoria goes to visit heir friend Marta. Marta’s apartment is a fascinating example of exotic surfaces within this film. She is a white colonial from Kenya, and her apartment is filled with things from her home country. A table made of elephant feet, innumerable spears, jewelry, etc. Additionally, her walls are covered with pictures of her home Kenya, highlighting both the African “natives,” the wildlife (Marta not really distinguishing between the two), as well as the majestic landscape. Antonioni films the things in this apartment, reproducing a world that is as foreign to the one he has fashioned thus far, yet at the same time very much within it. Close-ups of the images on the walls create a textured landscape through surfaces, offering a tremendous amount of detail to a rather bland flat in an equally uninspired building.

Following the scanning of the surfaces of the apartment walls, one of the most troubling and vital scenes in the film unfolds. Monica Vitti puts on a record of African music and dresses up in blackface. She proceeds to dance around the apartment with African regalia and a spear. It is the only moment in the entire film where she is pictured in a state other than determined disaffection. Her animated eyes against her dyed skin marks the a highly charged surface of race, colonialism, and roots of these Western surfaces. Interestingly enough, this scene about Kenya foregrounds the post-colonial independent movements happening at that moment in Africa, a violent legacy that is still very much with us as I write this. The surface of Africa that emerges in this scene in relationship to the quotidian images that constitute the vision of the developed world and it’s fetishized surfaces makes this film something far more than an abstraction — it is a highly charged visual poem. So forgive my attempts to make sense of these surfaces in a very raw and incoherent fashion, and watch this film. You will not be disappointed.