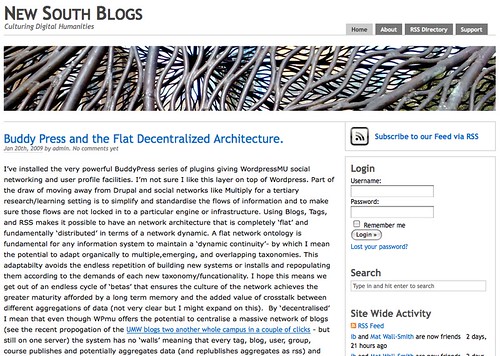 I just got a trackback from New South Blogs which is burgeoning publishing platform for the University of New South Wales, and it’s pretty cool to see the work many of us are doing in this regard impact and inspire folks all over the world. It is a brand new installation, but already Mat Wall-Smith (the cat behind this project) has me thinking about the implications of BuddyPress specifically, but the conceptual importance of a flat and loose platform like WordPress Multi-User more generally. In this post he says the following:

The WPmu approach is refreshing in part because it understands that tomorrow there will be new systems and new ways of working with data and that a mature and resilient network culture will probably need to be able to transcend (find a continuity) beyond the instantiation of particular system, technology, pedagogy, course, or organiser.

While I love BuddyPress for its opening of the social networking potential we found useful in Multiply and Drupal to an open system I wonder if it contravenes the dual tenants of flat and descentralised – I’m not sure I want an opensource facebook – I’d rather an open and dynamic social(ity)….

I couldn’t agree with what he says here more, and the importance in such an experiment is not WPMu per se, but the way in which this application mimics (or begins to reflect or represent) the increasingly distributed, autonomous, and networked logic of the web. It’s de-centered design does transcend the technology and begins to more and more represent how we are simultaneously imagining and shaping the web. It’s cool to read someone thinking through this at such an abstracted, conceptual level.

And what’s more, I like his questions in regards to the value of BuddyPress. Do we really want, or need, an open source Facebook? I’m not so sure, I immediately get excited that it provides a directory of blogs and members with little or no hacking, I also love the fact that we can create groups on the fly that can quickly become forums in bbpress. That said, I’m not sure the social networking elements are essential. In fact, I wonder if they might begin to suggest UMW Blogs as a kind of creepy tree house that is trying to be everything? Perhaps, I wonder if we might be best off emphasizing the directory functions and just see what happens with the social networking tools. If people find ways to use them effectively and they become valuable, great. If they don’t, it really doesn’t matter all that much because the core of WPMu remains untouched, and it didn’t cost us anything 🙂

Nonetheless, I appreciate Mat’s making me think through this one a bit more, and here’s to New South Blogs, which appears to be an exciting addition to the world of educational publishing platforms.