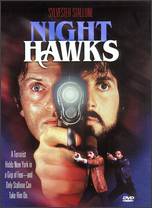 I love movies that feature New York City during the late 70s and early 80s, they capture a space on celluloid that I want to constantly remind myself existed once upon a time. And after watching The Hitcher a little while back, Rutger Hauer reminded me of the classic Nighthawks which is an excellent example of a NYC film during this period. And while it’s a post-Rocky Stallone vehicle (he is beautifully 70s in this film), I don’t remember it so much for him—although on re-watching it he has a gem or two in there which seem like preparation for his role as John Rambo. The real push to return to this film came from one of my favorite character actors, the great Joe Spinell of Maniac fame. When I drill down even further, I actually re-watched this film for just one scene. A short, seemingly throwaway moment wherein Stallone is emphatically bitch slapped by Lt. Munafo (Spinell), possibly the most beautiful in the history of Spinell’s rich career:

“Understand this, sucker!!!” It doesn’t get any better than that, especially when it’s aimed at Stallone. Although, let’s face it, I’m a child of the 80s and I’d be lying if I didn’t acknowledge that I have a fond affection for Sly—and anyone who says otherwise during this period is lyig through their teeth. Let’s face it, Stallone is an over-actor’s actor who, like Charles Heston, is earnest in his inability, unlike the dreadfully saccharine William Shatner. An excellent example of which can be found in Nighthawks, the following clip is from the memorable subway chase scene and it would seem that Stallone is preparing for his classic monologue at the end of First Blood the very next year. Wait until the very end of this short clip for the pay off:

Last, but definitely not least, the opening of Nighthawks offers up a couple of treats. Not only does it feature the lithe keyboards of Keith Emerson, whose impact on 80s music and culture more generally is just starting to sink in, but also frames one of my favorite visions of New York City during the 1970s and 80s, a crime ridden wasteland in which being mugged by switchblade-carrying Puerto Ricans was a foregone conclusion. And this opening scene actually marries a couple of aesthetics from NYC films of this period, it frames the classic thugs mugging helpless victim in abandoned streets, à la Death Wish (1974), but ends with a cop foot chase and subway platform battle that reminds me a lot of The French Connection (1971). Seems like movies in the 90s and 00s forgot the importance of a compelling opening scene, which are far more common among even mediocre films during the 70s and 80s.