For the last 12 hours or so I have been playing pretty heavily with BuddyPress, which is basically a series of powerful plugins developed by Andy Peatling that creates a social networking layer for WordPress Multi-User. I had played with BuddyPress about six months ago on the recommendations of Andre Malan, and while it wasn’t there at that time, I’m sure it’s just about there now. In fact, I’m blown away by this project, for it really turns WPMu into a powerful open source social networking tool while at the same time preserving all the functionality and brilliance of WPMu as a blog-based publishing platform.

I really think this project will propel this application into all kinds of new and exciting directions for communities, and particularly educational communities. I regularly get between 10 and 20 emails a month from other universities and colleges all over the world expressing interest in UMW Blogs, and asking for more information about what we are doing with WPMu. Now that a social layer can be seamlessly added to this publishing framework I think the interest in WPMu will become far greater. In fact, I think it has the possibility of absolutely exploding in the education sector given EduBlogs has introduced ad content links in free blogs, Elgg is far less powerful and elegant, Ning is…well…Ning, and Facebook’s ploy for world domination will ultimately prove to be its demise. Why do I make such a prediction? Shouldn’t I leave this to the master of such things? Probably, but after signing up for an account on the BuddyPress test site last night, I got really, really excited.

And in large part because of something rather simple, like this: 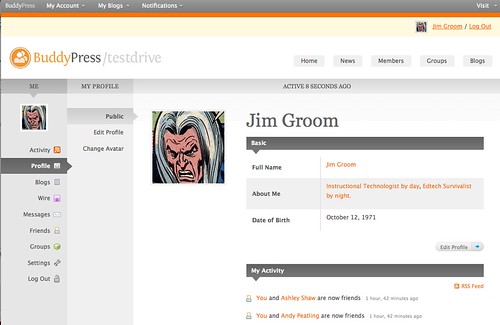 Click the image for a link to my profile page

What BuddyPress does is build a space for an individual profile that has a series of feeds across an entire WPMu installation that is an aggregation of their activity throughout the community, including posts, comments, status updates, groups joined, images uploaded, etc. Moreover, you can also subscribe to the activity of your friends’ feeds (oh yeah did I mention you can have friends), see a directory of all your blogs, create and join groups, send both direct and group messages to community members, have a “wire” attached to a group or image or some other object that allows for an ongoing discussion. And if that doesn’t get you excited, then how about directories that are centered around either blogs, an individual community member, or groups. Or maybe the fact that it will integrate with bbPress forums does it for you? I don’t know, what will it take? Huh?

Exploring BuddyPress this time around, I finally see all the social pieces we needed to allow others to find other people’s work within a WPMu community that was so much harder before. They are enabled through widgets so that you can customize the frontpage, and integrated for every user through a top-level menubar that is specific to them (much like what WordPress.com offers its users for administering their spaces). In fact, it seems that the menubar affords the ability to integrate the BuddyPress features with WPMu in a far less intrusive way than trying to build it within a blog admin space. The member profile becomes the new locus for activity and aggregation, and it just further re-inforces the privileging of the individual within WPMu community—and builds upon that fact beautifully. I think BuddyPress may prove another key element to “The year of the Digital Campus” at UMW next year for it really does re-cast the idea of an individual’s digital identity within an academic community. All this gushing, and I have ony just begun to play with BuddyPress in earnest. I think the next month or so is going to be dedicated to getting this seamlessly integrated into UMW Blogs. Moreover I think it would be perfect for another EDUPUNK project I have been thinking about for a while—but more on that anon.

2 Responses to Playing with BuddyPress