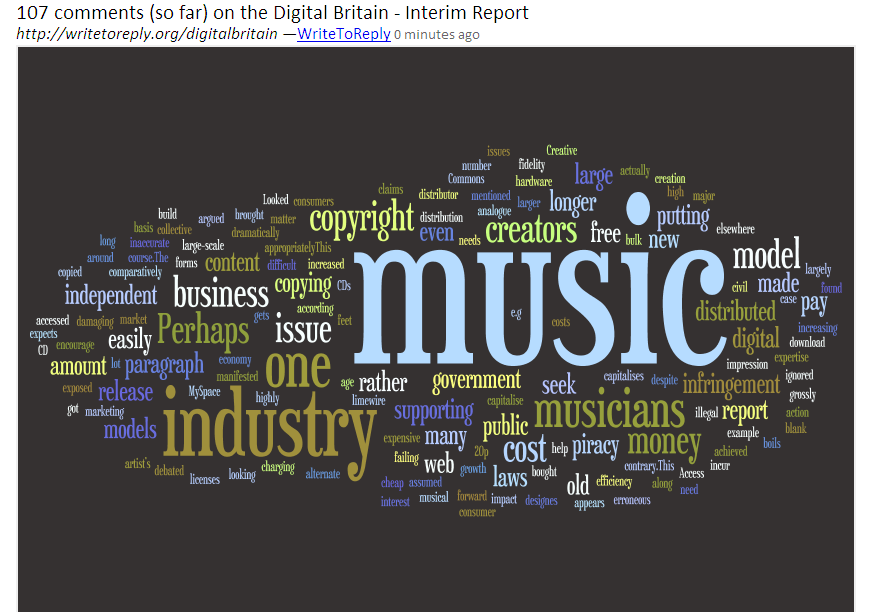 I just wanted to applaud Tony Hirst and Joss Winn for the amazing work they are doing with Write to Reply. These two British cats did nothing short of re-imagine the possibilities for an open, accessible discourse around documents that are made available for public review. What they have effectively done is create a site for re-publishing these public documents—which at the moment are Digital Britain’s Interim Report and the recently released Open Source, Open Standards and Re–Use: Government Action Plan (which Ars technica just reported on today)—that allows a line-by-line commentary by anyone who has something to say about the direction of these initiatives.

They also have a twitter account, a blog, Wiki, etc. It’s a remarkable example using free and (mostly) open tools like WordPress Multi-User, MediaWiki, and the like to quickly implement a space whereby people can publicly discuss, debate, and become informed about the ideas and decisions the British government is framing about their shared future. This is a model for fast, cheap, and loosely-joined civic engagement, and it wasn’t done by committee or through the organizations and leaders that be. It was done by a couple of British edtech edupunks who just wanna rock out! So, what have you done lately, honcho?

6 Responses to Wonder Twins activate, form of “Write To Reply”