After uploading the final speech from First Blood to YouTube, I was immediately delivered a copyright notice from Google and Lionsgate. Here is what it looks like: 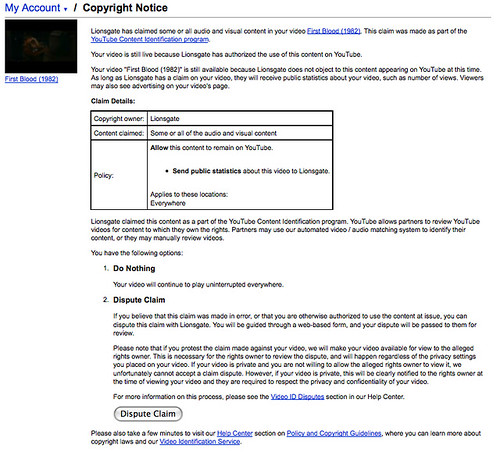 Click for larger version you can view in its entirety.

Lionsgate has claimed some or all audio and visual content in your video First Blood (1982). This claim was made as part of the YouTube Content Identification program.

As long as Lionsgate has a claim on your video, they will receive public statistics about your video, such as number of views. Viewers may also see advertising on your video’s page.

So, looks like Lion’s gate doesn’t mind folks uploading pieces of their movies to YouTube as long as they can track the stats.

In truth, the biggest thing that bugs me about this policy is that it doesn’t apply to pieces of all films and that they don’t allow others to embed in their sites. Videos on YouTube, particularly feature films, are about contextualizing a discussion, not about watching a film. It is a form of quoting and I want to give credit and rights, but I also want to be able to discuss the culture within which I have lived and continue to live with a certain amount of freedom.

Particualrly, I don’t want to have to worry about being sued or targeted as a criminal because I enjoy discussing movies with others. This policy seems to me an interesting experiment towards acknowledging and negotiating how people are using YouTube to frame such conversations (another reason why embedding is key). The stats remain, and more importantly an online community is discussing and thinking about their film, which means they will probably find some way to see it in its highest resolution, particularly if they are movie fans. And as with most movie fans, it most likely means buying or renting the DVD. How easy are they making this process?

So, am I being naive here? Has this been going on for a while with official notices letting you know they know, but also that it is kosher under certain conditions?